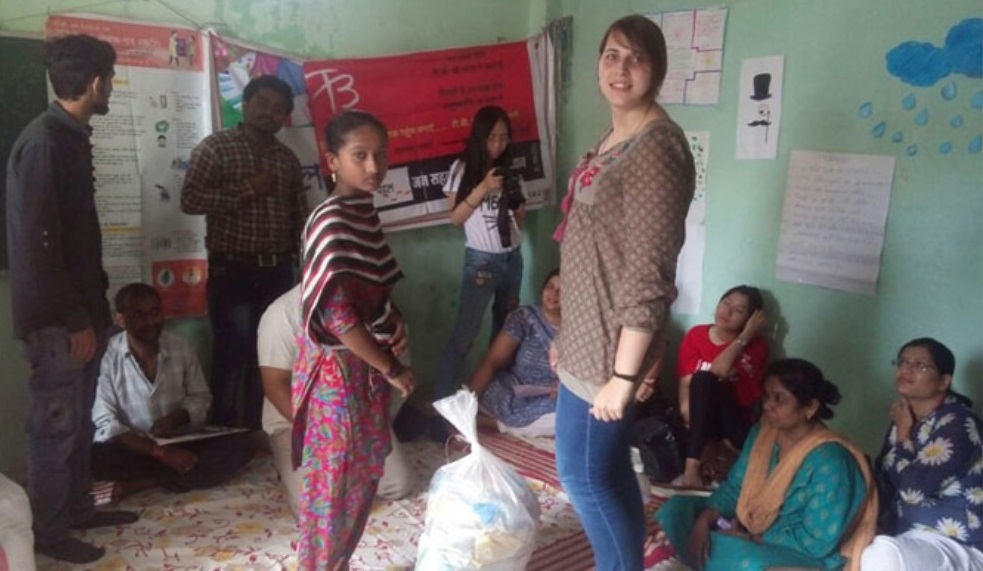 Your donation can give someone another chance to life

30-year-old Najma is a single mother who lives in Sadar Baag, Jalla Colony in Khajrana slum, with her mother and two sons. She is a domestic worker and the only earning member of the family. She hardly manages her expenses with her children and old mother often falling sick.

She reported cough for more than two weeks. The medical officer referred her at Designated Microscopic Centre for the testing of Tuberculosis. After examination, T.B was diagnosed and she was put on DOTS (Directly Observed Treatment Short) course. During follow-up, she was found to be weaker despite taking DOTS regularly. The reason was her improper diet because she could not afford better due to her financial condition. Besides, hard work on a daily basis was not allowing her enough rest, making her weaker by each passing day.

Pahal started a Ration Distribution Program for poor T.B patients. Under which, Najma also got ration support for two months. This improved her diet and helped her recover faster. Her health improved and she was diagnosed as sputum negative during her second follow-up of T.B testing. Now she actively does her work and continues to earn for her family.

**Your donation can help a poor T.B. patient get access to nutritious food to fight the disease. You can donate with confidence because every program on our platform is GIVEASSURED.

Tuberculosis is quite common in most of the underdeveloped regions of the world, including India. The WHO estimates that every year over 2 million new cases occur in India, which is 24% of the total cases of T.B around the world. The slums of the Indore district are the areas which are highly prone to Tuberculosis. In economically poor communities it has been observed that where families do not know where their next meal will come from, they will not seek care when they are sick because they neither want to lose their daily income nor spend the little money they have at the health centre.

Proper diet is a part of the T.B treatment. Nutritional support is hence important for people belonging to these communities. At present the prevalence of T.B is 171 cases per lakh population. Various studies prove that it is higher among the economically deprived, marginalized, slums and vulnerable areas.

Pahal is providing nutritional support to T.B patients from its project implementation area. It is involved in T.B awareness generation, case detection and treatment adherence of DOTs for the T.B patients. It does not support the poor T.B patients only in fulfilling their daily nutritional needs but also support them economically in their crisis situation.

Every patient requires at least 6 months support. Through GiveIndia, you can sponsor 2-months nutritional support for a single patient.

Whenever any beneficiary reports continuous cough for two weeks or more, they are referred to the DMC (Designated Microscopy Centre) of the govt.

Once a beneficiary tests positive for TB, he/she is referred to the DOTS Centre

The medicines for DOTS are a kit provided by the Central Govt.

PAHAL is a resource agency on the issue of Gender equity and women rights. Throughout Madhya Pradesh, PAHAL organizes capacity building programs for various Government and Non Government Organizations.

The organisation is actively involved in sensitization/orientation programs on the Domestic Violence Act 2005, supporting women who survive violence and promoting gender equity laws. PAHAL also counsels victims of domestic violence and harassment, guides them about the legal procedures, helps them in communicating with protection officers, police department, Women & Child Development department and lawyers. 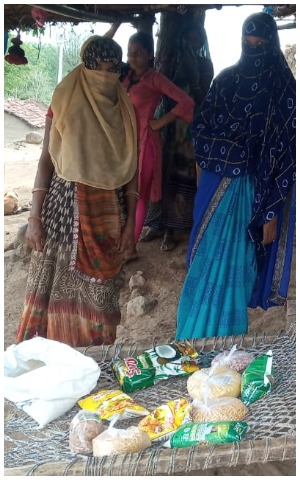 Pahal Jan Sahyog Vikas Sansthan has been implementing a program to support the poor T.B. patients through ration distribution since 2010. Over 12 years approx. Three thousand poor T.B. patients have been supported through this program. The earlier program was only covered the Indore district, but from 2015 Barwani also included in the program as Barwani is a poor district of Madhya Pradesh known for the tribal population.

From July to December 2021, 10 poor T.B. patients were supported by this program. We give two month ration to the family members of the affected person as due to T.B., they are facing wage/income loss but need proper nutrition to overcome T.B.

Pahal is implementing projects on nutrition in Barwani and operating a community health centre in Indore. The coordination with the health department is perfect, so we do not have a problem identifying the T.B. patients and their family verification in the field. But due to COVID, we face lots of challenges as screening of T.B. patients is going down because the focus of the health department is on the management of COVID. Due to lockdown and restrictions on-field activities, we also face problems reaching patients in remote places of Barwani. Irrespective of all these challenges, PAHAL coordinates with district administration and reaches out to the T.B. patients for ration support.

The plan for the next month is to streamline the program and boost up the field activities, which had been slowed down due to COVID-19. We plan to cover at least 50 poor T.B patients in the next six months.

Barki, the wife of Ramdas, is a resident of village Kukdiya Beda, Rajpur, Barwani, has nine members in her family and has nine months pregnant. The source of income for her family is daily wages from labour work. But due to lockdown, they were not getting a regular job due to which they were unable to meet their daily food requirements. Her husband also had a history of T.B. in the past. Still, due to low income and dependency on daily wages, their situation worsened, and the lockdown added more problems to her family.

They also think to migrate towards Maharashtra to get some work, but due to lockdown and pregnancy, they are unable to move from their village. Then during follow up activities by field workers of PAHAL this family came in contact. Field workers analysed the family situation and reported it to the project office to support them for ration.

PAHAL proactively responded and provided a ration of two months to the family. They were thrilled to receive the support, and soon Barki delivered a healthy baby. After lockdown, they engaged in their labour work to earn for the family. They are thankful to the PAHAL team they support them when they do not have any means of livelihood and scarcity of food. From this support, they can survive and come back to their regular work. 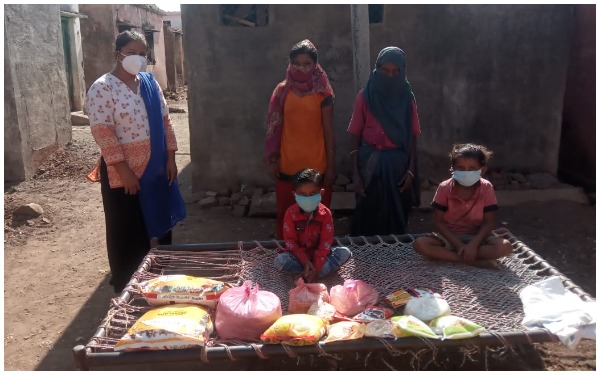 Since 2010 PAHAL is implementing a T.B. awareness program in Indore and Barwani districts. The program is not restricted to awareness activities only but also ensures the testing of T.B. symptomatic. If any person is found positive PAHAL provides him counselling support and dry ration for two months to the poor families.30 families received ration support from PAHAL, some families got benefited through the funds of GiveIndia. The areas covered for ration distribution and T.B awareness is Indore (urban slums) and Barwani (covering urban and rural areas) district in Madhya Pradesh. Apart from ration distribution, 300 people were aware of tuberculosis. The community outreach is hampered due to the COVID-19 pandemic thus less number of people are covered during the community awareness program.

The major challenge faced due to COVID is that testing of T.B. patients was not possible because all the health care institutes and administration focused on the management of COVID-19. Community outreach is also affected due to covid because government impose restrictions for community-level activities. At the organization level also we faced many challenges like our staff gets infected from COVID and effects on the regular reporting of the program also received fewer units in donation from individual donors. Next, six months will be focused on regularizing the community level activities and improve the operation of activities, but still, there is a fear of 3rd wave of COVID among the people.

Stories from the ground : Gudi Bai wife of Mr Juwan Singh is a 70 years old woman who resides in Jogwada Village, Sendhwa of Barwani district. She diagnosed T.B. at a designated microscopic centre since then she is taking anti T.B treatment. But due to the low income of the household, he is unable to take diet properly, as she also takes care of her grandchildren, has a family of five members, working as labour on daily wages also affects badly due to lockdown. She and her husband are only guardians of her grandchildren. Due to not taking proper nutrition, he is getting weaker. Gudi Bai received two months ration distributed by Pahal Jan Sahyog Vikas Sansthan. Now Gudi Bai is cured and back to her routine life. 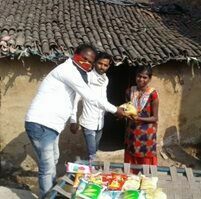 Pahal Jan Sahyog Vikas Sansthan is implementing T.B awareness program in the urban slums of Indore and Barwani. Pahal awares community on symptoms, treatment and prevention of T.B. We refer poor people which T.B symptomatic to the nearest Diagnostics Microscopic Centre for the testing of T.B. After detecting T.B. Pahal take care of treatment of these patients and provides ration to overcome from the disease soon.
Pahal Jan Sahyog Vikas Sansthan is running a program to provide nutrition support for poor T.B. patients. Through community meetings and awareness program on T.B. Pahal identifies the needy and poor T.B. patients providing two months ration support for the family. Every year 50-60 poor T.B. patients benefited through this program.

Importance of nutritions for a TB patient 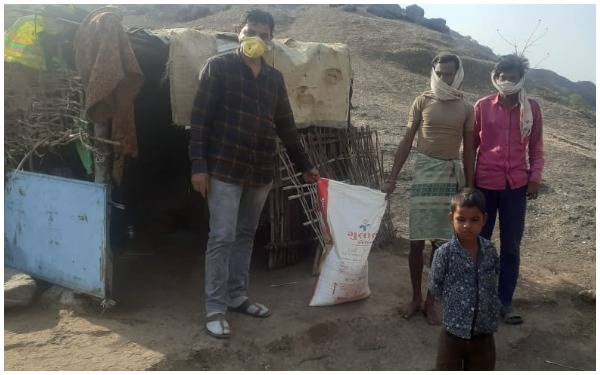 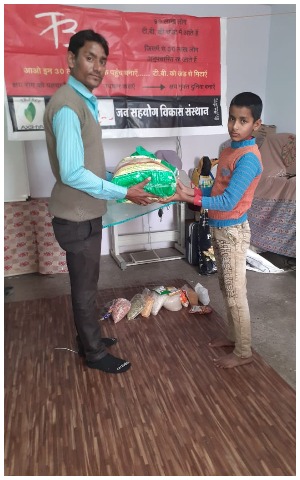 Importance of nutritions for a TB patient

Pahal Jan Sahyog Vikas Sansthan is implementing T.B awareness program in the urban slums of Indore and Barwani. Pahal aware community on symptoms, treatment and prevention of T.B. Also refers poor people which T.B symptomatic to the nearest Diagnostics Microscopic Centre for the testing of T.B. After detecting T.B. Pahal take care of treatment of these patients and provides ration to overcome from the disease soon.

In this duration also PAHAL distributed two months nutrition support for a poor T B Patient.

Gift the joy of motherhood by Charutar Arogya Mandal