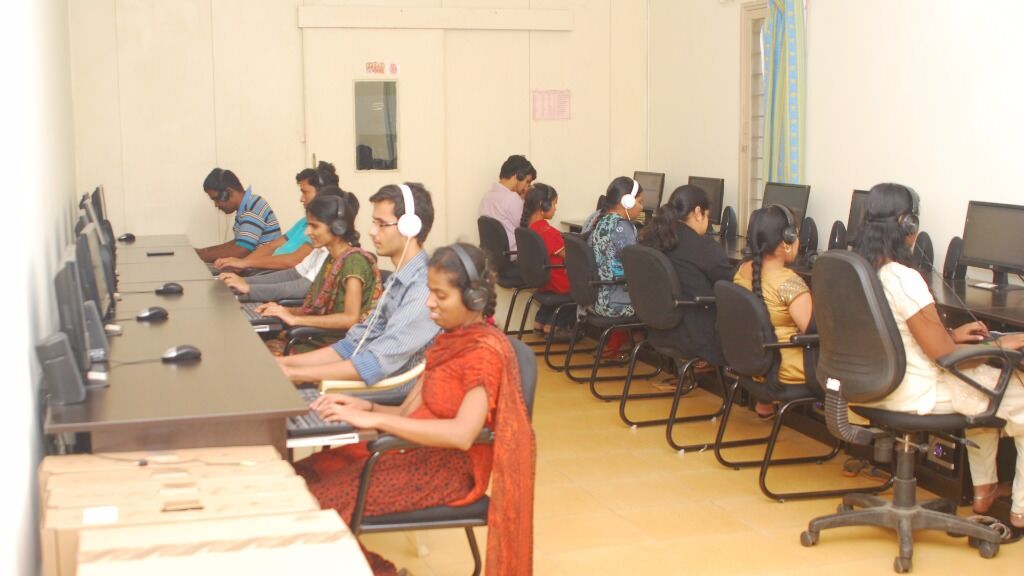 Annemma hails from a small village in Gulbarga, and has been visually impaired since birth. She has minimal vision which enables her to see only the outline of objects. She began her education in a regular school in her village. However, as she could not cope with her vision problems, she dropped out after the 4th grade.

She was identified by a field worker of Smt. Ambubai Residential School during one of their visits to the village. Her parents were counselled about the importance of education and she was enrolled in the girls school in Gulbarga.

After assessing her vision, the school decided that she had to restart her education from Class 1 in Braille. She continued her education till class 10 in the same school and went on to secure 87% in her S.S.L.C (class 10) examination.

After her class 10 exams, Annemma enrolled in the 'Basic Computer Training and Mobility Skills for the visually impaired' at Mitra Jyothi.

Along with stay, Annemma was also provided with nutritious meals on all days. Without this, she couldn't have finished her training as she couldn't afford her stay in Bangalore.

Annemma's mobility has now greatly improved with the training. She travels independently with the use of a white cane to support her as needed.

The trainers at Mitra Jyothi have identified her potential and decided to support her college education. They have enrolled her into Government Pre-University College in H.S.R Layout, Bangalore. She is now pursuing her education majoring in History, Economics, Political Science and Sociology along with Kannada and English.

Annemma's wish is to become an IAS officer and serve our country.

Your monthly donation will help more visually impaired students like Annemma get access to nutritious meals during their training at Mitra Jyothi. You can give with confidence because every program on our platform is GIVEASSURED. Give now and help the visually impaired learn to be independent.**

The Mitra Jyothi computer training program imparts basic and advanced computer usability skills to persons with all kinds of visual disability from people with low vision to people who have absolutely no vision. This training is provided through the use of Non Visual Desktop Access or NVDA which is a free screen reading software that enables blind and vision impaired people to use computers. It reads the text on the screen in a computerized voice. Mitra Jyothi offers three types of computer training to visually challenged students 3 month fast track courses for degree holders 6 month retail course 2 month summer course for PU students Students are taught basics such as: Introduction to computers Keyboard orientation Basic usage such as folder and file management MS office Internet usage Reading and sending mails. The 6 month long retail course introduces the students to e-commerce applications, and online registrations. Apart from computer training, students are also introduced to Accessibility testing, Soft skills, legal literature, Spoken english, Mobility, Cooking etc based on interest and necessity. All trainees are also given a library membership where they have access to audio and Braille books. When you donate to this program you will help visually impaired students get access to nutritious meals while undergoing training that helps them gain employment skills.

Mitra Jyothi is a registered trust (under Indian Trust Act) which was started in 1990.

For the last 26 years they have been they have working for the welfare of people with disability with a focus on the visually impaired.

Mitra Jyothi's Mission is to help visually impaired individuals lead independent and dignified lives through education, training, counseling, communication, and technology. They provide computer training, accessible educational material, Independent Living skills, Braille transcription and library access to students. They also have a placement cell for their trainees. In addition to this they also have a residential ‘Center for Empowerment of Women with Disabilities' (CEWD).

Over the years, it has conducted a variety of training courses and support programmes to assist people with disability to become independent and instil in them the confidence to achieve their goals.

The organization is run under the able guidance of Ms. Madhu Singhal, a National Awardee who has accomplished many milestones not only in India but also abroad despite her own disability. The organization and its founder have received many awards and accolades over the years for the exemplary service they have been providing. 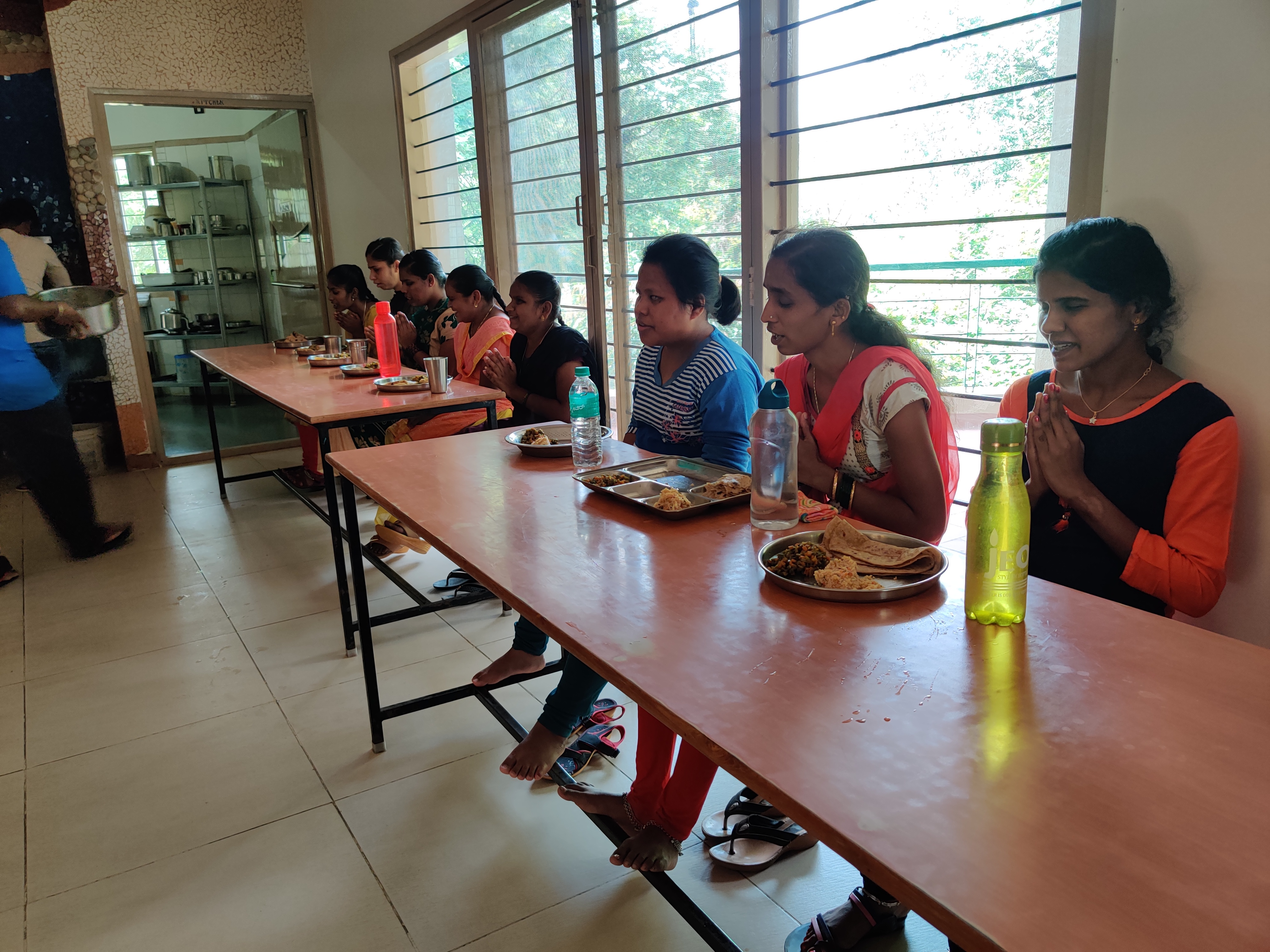 Twenty-four visually impaired candidates stayed with us with our food and accommodation facilities in the past six months. They were either college going students or part of the Computer/ Life Skills program at Mitra Jyothi. A couple of events were conducted for awareness, knowledge sharing, especially around the RPD act at Mitra Jyothi for the beneficiaries. Even a few birthdays, and special occasions like Women's Day, were celebrated, and special meals were provided to the students. They loved the food prepared by our cook Mr Krishna and students who already moved out often sent messages stating that they miss Mitra Jyothi’s tasty food.The value of art goes beyond the paints, the colours or the canvas; the beauty of art is in the connection between the individual and the piece, no matter their physical abilities. On 9th April 2021, a painting event for visually challenged people as a part of an initiative, 'Art in the Dark – MYTH BUSTER SERIES' was arranged in collaboration with another NGO. This event was organised by exploring the 3D objects around the visually impaired by the touch and feel method. The teams guided and helped the participants to use different painting techniques such as how to do a painting using the fingers etc. Each participant put their imaginations in their artwork, which made them extraordinary. There is a general perception that a person with visual impairment cannot do visual arts. By breaking that perception, all the participants gave an extraordinary performance and came up with beautifully painted sceneries. One of the participants, Roshini, says, “When I came to know about this painting event, I was confused…how can I do a painting? I had only heard about paintings; I could never imagine how a painting would appear.”She also added, “It was such a wonderful experience when I first touched the canvas and felt the scenery on it…my hands started shivering when I touched the painting colours for the first time in my life. I cannot express in words my happiness when I picked up different colours with my fingers as suggested by the teachers. Everybody said my painting looks amazing, and now I can imagine that scenery in my mind. I enjoyed the painting event throughout. It was such a proud feeling for me when I shared my painting with my family and friends who can see it.”

Due to the lockdown restrictions put in by the state government, students went back to their homes to spend time with their family and well-wishers for around 40 days during May and June 2021. We were guiding them over the phone and assisted them based on their need. We restarted the residential facility full-fledged by mid-June 2021 and the students are now back. In the upcoming months, we are planning to get admissions of more students in nearby colleges and provide food & accommodation facilities with the support of well-wishers.

Stories from the ground:Roshni – a young versatile girl aspiring for a bright future!Roshni, 29yrs old, from Mangalore, is completely blind from birth. Her father is a farmer and her mother is a homemaker. She has 2 elder sisters who are married. Roshni studied in Jyothi Seva School for Blind, Bengaluru till grade 7. Thereafter, she joined a mainstream sighted school - Satyaseva High School, Bengaluru to complete 10th grade. Then she moved back home and completed 12th grade and graduation through correspondence. Roshni was introduced to Braille in school and is very comfortable with it. She utilized Mitra Jyothi Braille books since then through her school. When a friend told her about Mitra Jyothi’s computer training, Roshni jumped at the opportunity to learn something new and also to be part of the Mitra Jyothi family since till then she didn’t get a chance to visit the centre in person. Roshni did not let her disability define her. She worked on her various interests to give another dimension to her personality. Being fond of music, she not only sings well but also learnt to play the piano in school. Roshni loves to play with clay and give shape to her imagination by making clay flowers, candle stands etc. She doesn’t miss an opportunity to read a good book when she comes across one. Growing up with two elder sisters and in a hostel with friends, Roshni picked up hairstyling as a hobby too. Roshni says, now she is a confident girl and Mitra Jyothi's support played a vital role in her life to gain knowledge and complete her education. She is sure that she can achieve her aspiration with continuous support from Mitra Jyothi. Roshni aspires to take up a government job and teach others Braille in her free time.