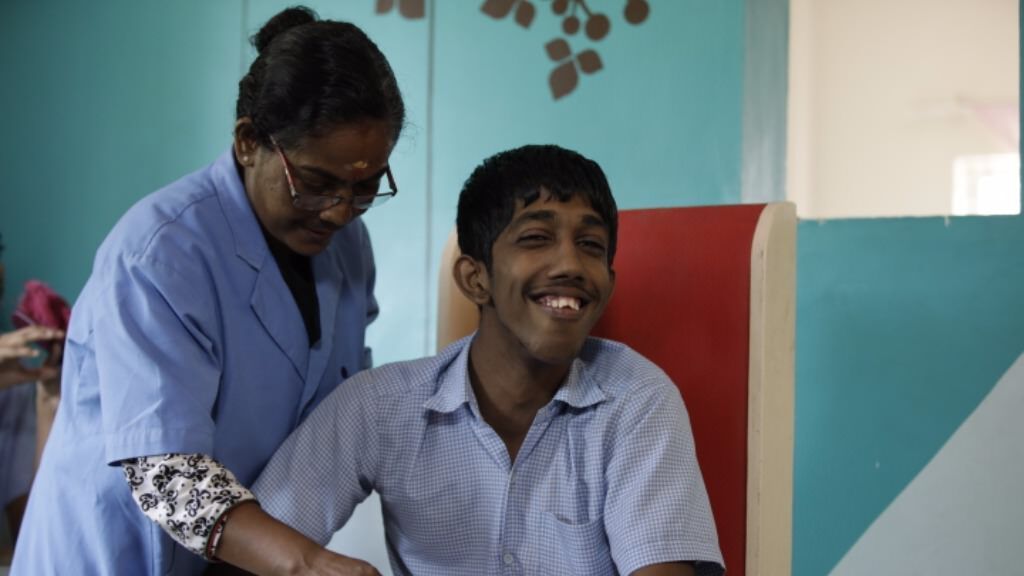 Jerin can now walk thanks to someone like you!

Jerin is a 16-year-old boy from Kochi who suffers from Cerebral Palsy. His father is a daily wage worker and his mother is a housewife.

They barely had enough money to pay for their necessities. They had absolutely nothing to help Jerin with. The family was distraught over his condition as they thought that it would be the end of the road for him.

He was found by Adarsh Charitable Trust and they took him under their care. He was unable to walk and could barely move any of his muscles. To correct this, he was given orthopedic surgeries followed by regular physiotherapy. He slowly began to gain control over his physical functions.

Jerin has been under the care of Adarsh Charitable Trust for the past 12 years and his health has seen great improvements. Over time, he was even able to start walking with the help of a stick! What seemed like an impossible dream to Jerin and his family is now a reality.

Adarsh is a rehabilitation center for children with physical and mental disabilities in the state of Kerala. The major activities of the foundation are physiotherapy and special education. These are implemented by trained physiotherapists and special educators. There are also assistant teachers and supporting staff to help the children.

Children with disabilities are identified through thorough evaluation and assessment using various tools. Children below 3 years need the only physiotherapy while those above 3 years need both physiotherapy and special education. These services play an instrumental role in the child's improvement. But supporting these activities and staff are a matter of huge concern for the foundation as half of the students fall below the poverty line and cannot afford these services.

Donations made to this program support the cost monthly tuition, physiotherapy fees, and administration cost.

A donation helps bring a tremendous change in the lives of these little ones.

With a mission to provide rehabilitation measures, Adarsh Foundation was started in the year 1998 in Kerala and is currently under the chairmanship of Shri. K P Padmakumar. Its dedication to its mission helped identify hundreds of children with disabilities from their birth.

It has gone beyond in reaching out to those who need their support and help.

Till date, with the support from the foundation, more than 200 children have been able to sculpt their way into the mainstream. Adarsh foundation has a staunch belief that rehabilitation is possible and disability can be specifically identified and treated with appropriate therapy and training. This makes it an institute of excellence in the rehabilitation of children with challenges.

Help a differently abled child get independent with therapy 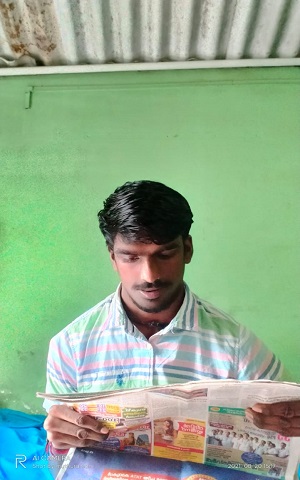 Due to the Covid pandemic schools were closed exactly on 10th March 2020 when the Nationwide lockdown was announced. Adarsh extended online rehabilitation programmes for the children since then. Last year from June 2020 to April 2021, Adarsh has extended over 4800 live classes via the Google Meet platform. The programmes include Group Special Education, Individualised EducationProgrammes, Group Exercise programme, Individual Physiotherapy, Occupational therapy, Behaviour therapy, Speech therapy, Music, Dance, Drawing, Counselling, etc, which were given regularly every week. Almost 86% of the total children attended online classes last year. In addition with the help of TATA Consultancy Service, Ernakulam Centre, Adarsh extended Virtual Reality training for children to improve coordination and balance. Around 95% of children are from Ernakulam District. Rest are from outside Ernakulam and they attend online programmes from their home. Occasionally, they were asked to come to school for physical evaluation only if it is absolutely required. 42 children were impacted with this programme. All the children attended these online programmes. The primary aim was to maintain their functional status without much deterioration. We are proud to inform you that all the children are happy and active.

Covid has really impacted their school life. Now all are confined to their home. These children need socialization and frequent interactions for their physical and mental well being. To a certain extend, we could maintain their interest and enthusiasm through our online programmes. We have observed all the important days and events, and similarly all the festivals were celebrated online with the children. So, even though they are at home we never gave them a feeling that they are alone. For that, full credit should be given to our staff members. They worked hard to keep our children healthy and happy.

Stories from the ground: Muthuraman is 19 years old. He has Cerebral Palsy but can walk independently. He is attending secondary class under NIOS. He has good social and communication skills, alongside studying well. He is independent in all his daily life activities. He reads well and but has problems in writing. Because of his physical issues he is slow in writing. Now, with regular practicing he has shown changes in writing also. He likes music, dance, computer and drawing. He regularly attended Physiotherapy and Occupational therapy. He has coordination and balance problem in walking which is very much under control now. His family is very supportive. He really missed the school activities due to covid. 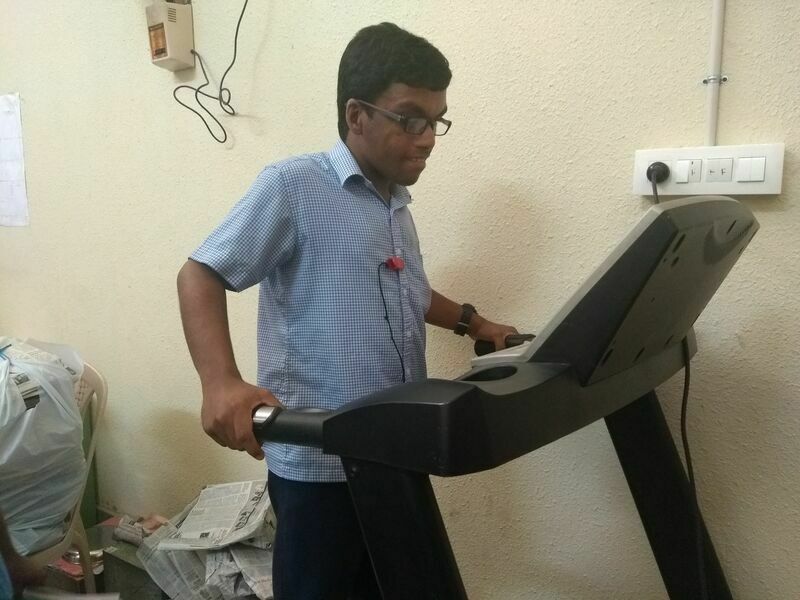 Since March 2020, as we all know, the whole country was locked down due to Covid-19 pandemic. Since then schools are closed and all the activities are online for these children. Initially when the concept of online education was introduced to parents, there were so many issues like, lack knowledge on internet and its usage, lack of availability of smartphones etc. The online programme was started with a programme called VIA (Vocation Information Activity) programme. Here parents are trained to use the smartphone, use computers, and also Adarsh provided smartphones to needy children. Out of 283 children in the school, around 240 are attending online classes regularly. The sessions include Special Education, Physiotherapy, Occupational therapy, Speech therapy etc. For Physiotherapy, activities are given based on Augmented Realty (AR). Various AR based games and activities are available in google which are found to be very useful for the children. Special Education service is given on a daily basis from Monday to Sunday through watsapp video call and there will be one session of live class on google meet platform. Similarly Physiotherapist too is given through watsapp by sharing various videos of exercise and educating parents. Occasionally teachers and therapist visit children's home and provide therapy and training

I have miles to go to become independent 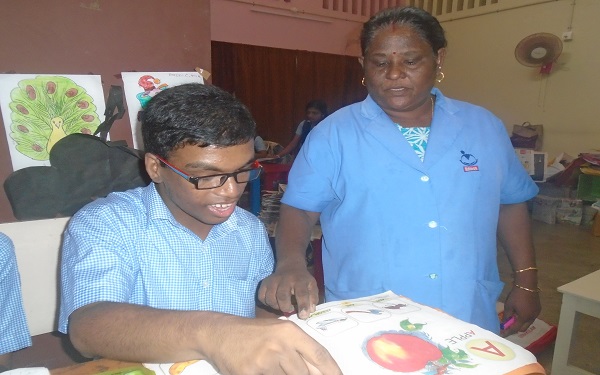 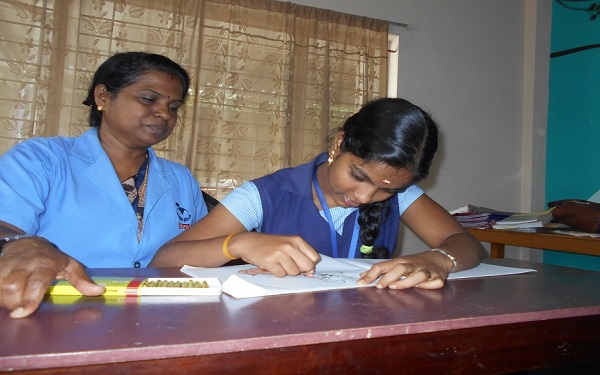 I have miles to go to become independent

We have been doing so many innovations in the filed of rehabilitation of children with challenges. In the mentioned project, during the reporting period we have introduced 2 new programmes, one a Mini Super Market inside the school premises which is run by the challenged children themselves. This has been done in order to make them independent. Either a mother or a teacher will be there to supervise their work. Another programme is Hydrotherapy, a water based therapy programme which is highly useful for children with Cerebral Palsy and Autism. Hydrotherapy enhances the muscle strength and coordination of children with Cerebral Palsy where as in children with autism, it helps to reduce their hyperactivity and tantrum behaviour. 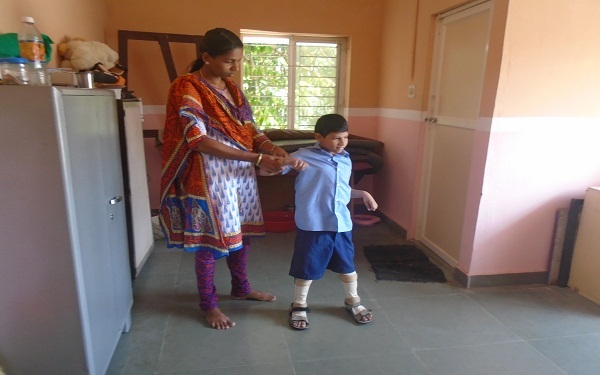 Adarsh Special school focuses mainly on comprehensive rehabilitation of children with different disabilities like Cerebral Palsy, Autism, Down syndrome and Multiple Disability. A panel of experts including Psychologist, Special Educator, Physiotherapist, Speech therapist and Occupational therapist evaluates each child at the the time of admission and required therapy programmes are provided twice or thrice a week based on the evaluation,. Some of the special therapy programmes other than normal are virtual realty programme, sensory integration therapy, music therapy, hydrotherapy etc. Progress of each child is reviewed every six months and modifications in the therapy programme are made, For the next quarter the same protocol is planned for almost all the children in the porgramme for getting the desired outcome.

Between January and March 2019, a good number of children from Adarsh participated in Bhavana Cultural fest 2019, a competition for challenged children organised by Rotary Club of Cochin International. In events like solo song, group song, solo dance, group dance, fancy dress, tableau, painting, drawing etc, children of Adarsh won several medals. We are very happy to inform you that Adarsh won the over all champions trophy for the Mentally Challenged category and became the first runner up in Physically Challenged category. In addition Adarsh celebrated World Autism Day, World Down syndrome day during the reporting period etc. All these programmes showcased multiple talents of children of Adarsh.

Kasinath, a 12 year old boy afflicted with Cerebral Palsy joined Adarsh in September 2008. At the time of admission, all his developmental milestones were delayed. He had both motor and sensory impairments. He was not able to sit or even stand without support at the time of admission. Based on the evaluation, he was admitted in Early Intervention Unit of the centre where he was being given regular intensive Developmental therapy along with sensory and communication training. At the age of 4 years he started walking with slight support and still he needs support for waking due to his severe muscle spasm. After 6 years he was promoted to next level of training to make him independent in daily life. Now he is in functional academic class where he is trained to learn basic concepts like number, letter, shapes, colour etc. He had some bahavioural issues like spitting on others, temper tantrums etc. With the help of regular Psychotherapy all his behavioural issues are now very much under control. 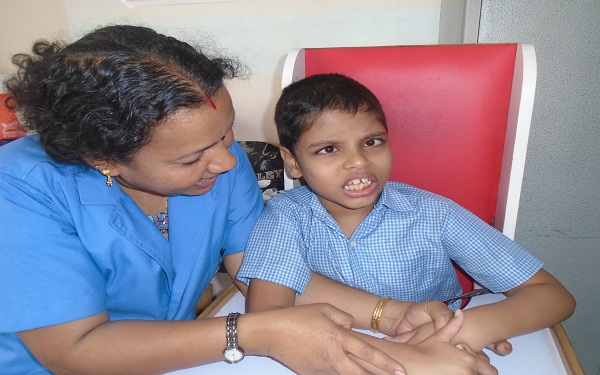 The man objective is to help a challenged child to get independent therapy and training. Here the main programmes are physiotherapy, Occupational therapy, Speech therapy, psychotherapy and special Education. Majority of the children are affected with Cerebral Palsy and they need Physiotherapy and Speech therapy. Rest of the children will come under the umbrella of problems like Autism, Down syndrome and Multiple Disability. These children mainly need Special education and therapies like Occupational therapy, Psycho and speech therapy. Each therapy programme is finalized based on the evaluation and subsequent diagnosis children are segregated based on their functional abilities and each child has a time table set for her/his therapy programmes. All these therapy programmes are implemented with the help of trained, experienced and qualified professionals.

Kevin Shaji is a child with Cerebral Palsy with associated mental retardation. He is a child with multiple disabilities. He has features of Autism. Kevin Shaji joined Adarsh in 2016. At the time of admission, a detailed evaluation was taken which revealed his major issues like communication issues, socialization problem and he had some behavioural issues. Along with these problems he also had balance issues while walking. His main therapy and training programmes were Occupational therapy, Speech therapy, Special Education, Psychotherapy and Physiotherapy. During these 2 years of regular intensive training in Adarsh, Kevin has now showed marked changes in all areas including communication, socialization etc. There is a considerable decrease in his behavioral issues. With Physiotherapy, his balance is very much improved that he is now able to walk with minimal support and even he started climbing steps with slight support. With Special Education he has achieved toilet schedules which was irregular earlier. He has shown improvement in all other Activities of Daily Living mainly feeding. Occupational therapy helped him to improve his fine motor skills that he is able to hold small objects like ball. Kevin Shaji is a from a poor family background. This support helps to continue his training in Adarsh.