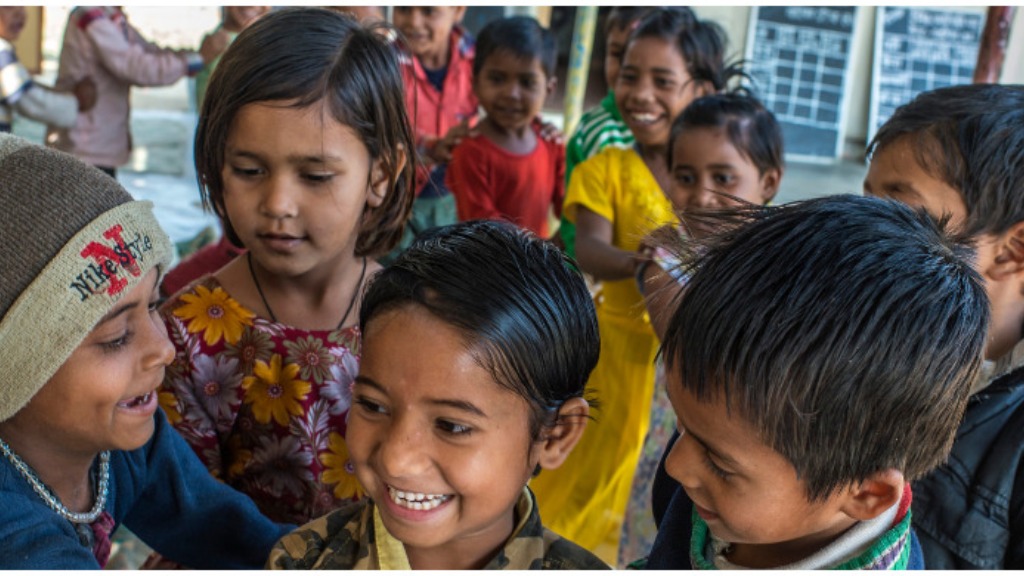 Ruby gets a happy and healthy life

Ruby was born underweight and regularly suffered from acute diarrhoea. When an eight-month-old toddler was brought to the Gurgaon day care centre of Mobile Creches, she weighed only 5kgs. She was suffering from grade III malnutrition. The staff put her on a special diet and she was kept under the watchful eye of the MC staff. Slowly, she started gaining weight and making some recovery. This also helped her mother understand the importance of good nutrition and basic hygiene. Today, at 1 year and 4 months old, she maintains a normal weight of a child her age and weighs around 8kgs.

21% of India's children are severely underweight. Your donation can provide basic nutrition to these children in need. Donate with confidence because every program on our platform is GIVEASSURED.

Mobile Creches' (MC) runs a day-care program for children of migrant labourers working in construction sites across Delhi NCR (Gurgaon, Ghaziabad, Noida). The centres focus on health, nutrition and education of these children.

The nutrition program provides fresh balanced diet to the children. Each centre on an average has 60 children a year of which 70% are severely malnourished when they come to the centre for the first time. With the nutrition program, MC strives to bring them back to normal health. The day-care centre provides them three meals a day, including breakfast, lunch and a snack before going home. The meals are nutritionally dense comprising mainly of khichdi, dalia etc.

Malnourished children are further provided with supplementary nutrition of eggs and bananas. For those more severely malnourished (Grades 3 and 4), the frequency of feeding is increased by 3-4 times a day with a special low-cost, locally made, ready-to-use therapeutic food (RUTF) of rice, wheat and chickpea (chana).

Staples like cereals and pulses are supplied by MC to the day-care centres. Perishable items like milk, fruits and vegetables are purchased locally by the centre staff to ensure freshness. The food is cooked in each centre by a trained staff, which is also trained for teaching these kids.

Mobile Creches do monthly assessment of the outcomes through a growth-monitoring exercise to ensure proper implementation of their initiative. One of the studies conducted by them have found out that 75% of children in the age-group 0-3 years and 73% of children in the age-group 3-6 years have either retained or come up to normal nutritional grade if stayed with MC for at least six months.

Mobile Creches for Working Mothers aims to build a just and caring world which enables young children of marginalized and mobile population to develop into competent and confident individuals.

She has a focus on development, establishing linkages between local resources, community embedded programmes and effectiveness measured in terms of poverty reduction and increased participation by stakeholders. .

Number of exposure visits of children done for practical learning - 30

The first Mobile Creche was set up in 1969 at a construction site in Delhi to provide basic care for children of migrant workers. Early Child care is a preventive strategy that enables the young child to blossom, the older sibling to go to school and the mother to work. 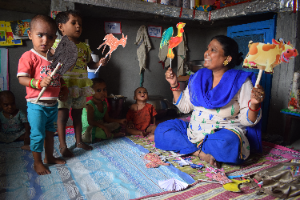 India has surpassed the 3.7 crore mark (January 18, 2022) in COVID cases since the lethal third-wave hit us. The brutality of this wave is evident as cities and systems crumble to provide urgent health support to desperate and dying people. The mutant virus is infecting young children and adolescents rapidly, more than doubling the caseload as compared to the pandemic in 2021. Children not only need immediate protection against the virus but also early childhood development support. Children’s social and emotional well-being must be nurtured as parents and adults around them experience high stress over an uncertain future through this insurmountable crisis.

During the pandemic, Mobile Creches distributed dry rations to all children, identified malnourished children for special support, and mapped the immediate needs of young children and women that we could meet through community linkages. We are supporting over 10,000 families with young children across seven cities. But this was before the devastating conditions seized us in Delhi and other cities.

In a pandemic of such gigantic proportions, the urgency is to ramp up health infrastructure and support frontline health workers to meet the expected peak caseload across the country. At the same time, it is vital for organisations like MC to remain connected with poor families, excluded from public welfare systems, to ensure they have the information and the means to remain resilient against the infection and to seek and receive the help they need at this hour.

Pinki migrated with her family from Chattisgarh looking for employment. They started working at the Brookfied site, where her husband worked as a daily wage labourer and she worked as a helper at the MC Centre. She has been working as a helper with Mobile Crèches since 2018. When the pandemic hit the country, unlike many of the families working at the construction sites, Pinki was not able to go back to her hometown. She and her family decided to stay back at the site. She, being a member of the MC team, also decided to support the children and help the parents during this pandemic in any way possible.

Pinki, being a mother of two, a 4-year old son and an 8-month old daughter, understood how difficult it is for a working woman to take care of her children while having to go to work. She took an initiative to support the mothers who were working at the construction site. She asked the mothers who were in dire need (and who did not have anyone to look after their children at home) to leave their children with her at the centre. Though the centre was not functional, she carried out activities with the children in the "veranda" of the centre. The mothers would drop off their children at 8:30 a.m. before going to work and pick them up at around 6 p.m. During the time when the children were with Pinki, she would carry out various developmental activities with the children. The activities would be different for each age group and based on a particular theme. The helper would carry out activities based on the online curriculum that was being shared by the MC team. Pinki also showed them stories and poems that were shared by the team with the children on her phone.

Pinki is in constant contact with the MC staff, who continuously calls her and shares activities, stories, and poems based on the weekly theme. She is well versed with how the activities are to be conducted with the children as she was very observant when the balwadi, or crèche worker, used to conduct activities at the centre with the children. Other than conducting various activities, Pinki also fed the food that was sent by the parents along with the children. Pinki would sometimes take some of the children to her house during lunchtime and feed them if their parents had not sent any food.

Pinki is very positive, hard-working and enthusiastic about her work. The MC team is proud of Pinki's dedication to her responsibilities with the children. The parents are also very happy with how their children are enjoying their interactive learning session with Pinki. Along with the parents, even the children are showing a positive reaction to the activity programmes. The mothers are especially overwhelmed when their children recite the poems and stories that they learn with Pinki. The children every day await their session with Pinki, and even the mothers like it when their children return home and share their learning with them. 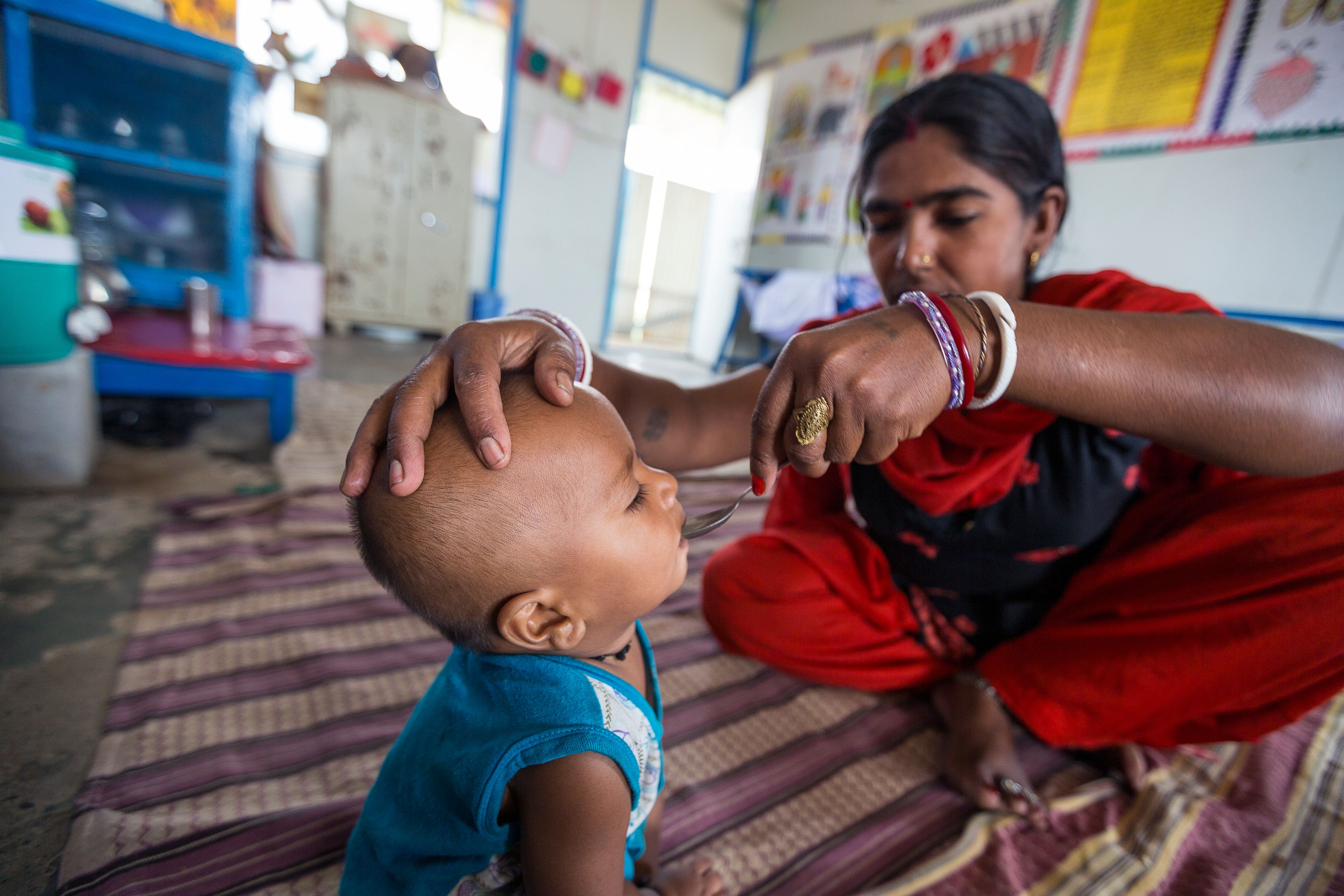 Story from the ground: Rajesh’s wife, eight-year-old daughter, and two-year-old son depend on his income for their survival. Rajesh works at a construction site in Gurgaon and lives in a labour camp. He had never thought that they would have to face such a crisis. Unable to meet the nutritional needs of two growing children, they didn’t know where their next meal was coming from. Relief aid became their sole source of survival. The family received dry rations from MC and other relief groups.“I remember staying up at night, praying that tomorrow will be better. But I will not lie; the pandemic pushed us to starvation. I was here to work, and take care of my family, and now there is no work,” Rajesh shared.Faith in each other, and a belief that they will cross this together kept Rajesh and his wife going when there was nothing left to hold on to. 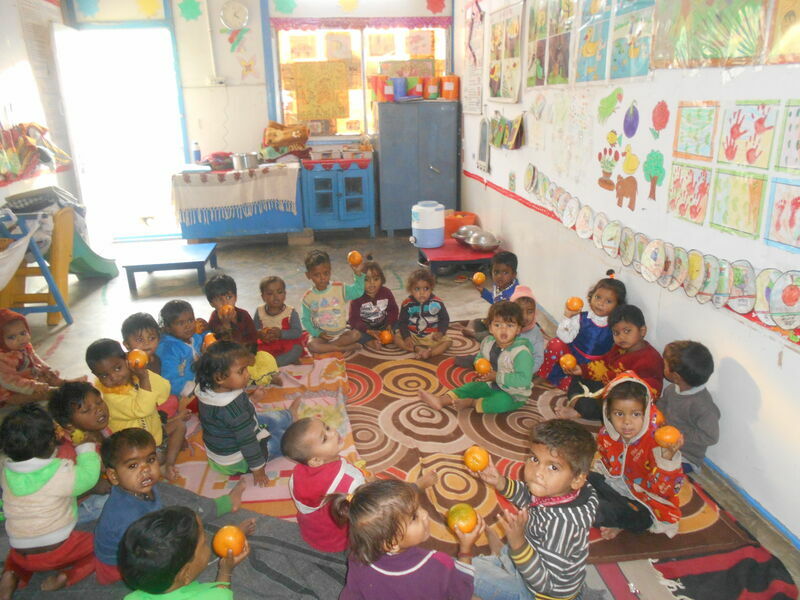 . 660 malnourished children received special diet. Eggs, milk, and bananas for all children
thrice weekly.
• 232 children were enrolled in nearest government schools.
• Cancer screening camp was organised in G1 crèche in partnership with the Health
Department, Govt of Haryana. 180 women were screened.
• Interactive activities like story telling, puppet shows, ‘show and tell’ activities were a part of the Children’s Week celebrations, to encourage children to express themselves.

In 2019-20, MC intensified its partnerships in four states to strengthen people’s participation for
the integrated rights to nutrition, health, education, care and protection, of young children.

Responding to Hunger
• Mapped 24,000+ households across 9 states and UT, in 51
construction sites and 23 urban slums
• Distributed 21,752 food and hygiene kits; 9459 kits directly
distributed by MC
• Ensured special nutrition to 4569 children under 6 years, including
2242 at construction sites
Cared For Children
• Created new and redeveloped existing materials on COVID
precaution, psycho-social wellbeing of children and families, and
educational curriculum, to be transacted through phones
• Trained 100+ crèche workers and 3 partner organisations on
imparting COVID precaution modules, and early education through
play activities, stories and poems 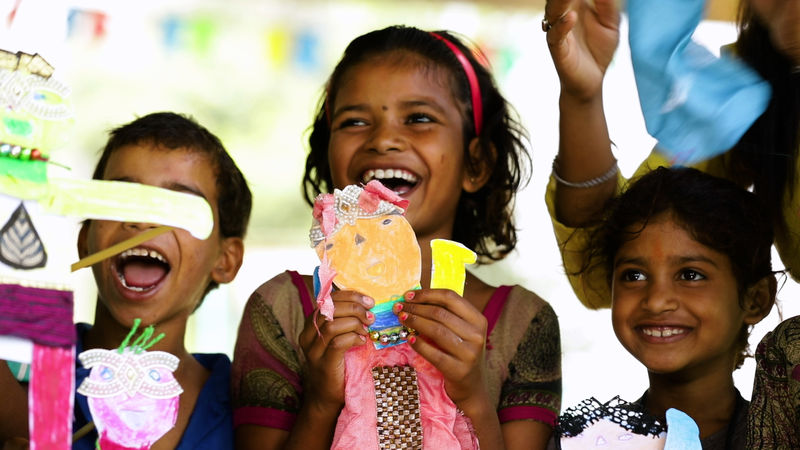 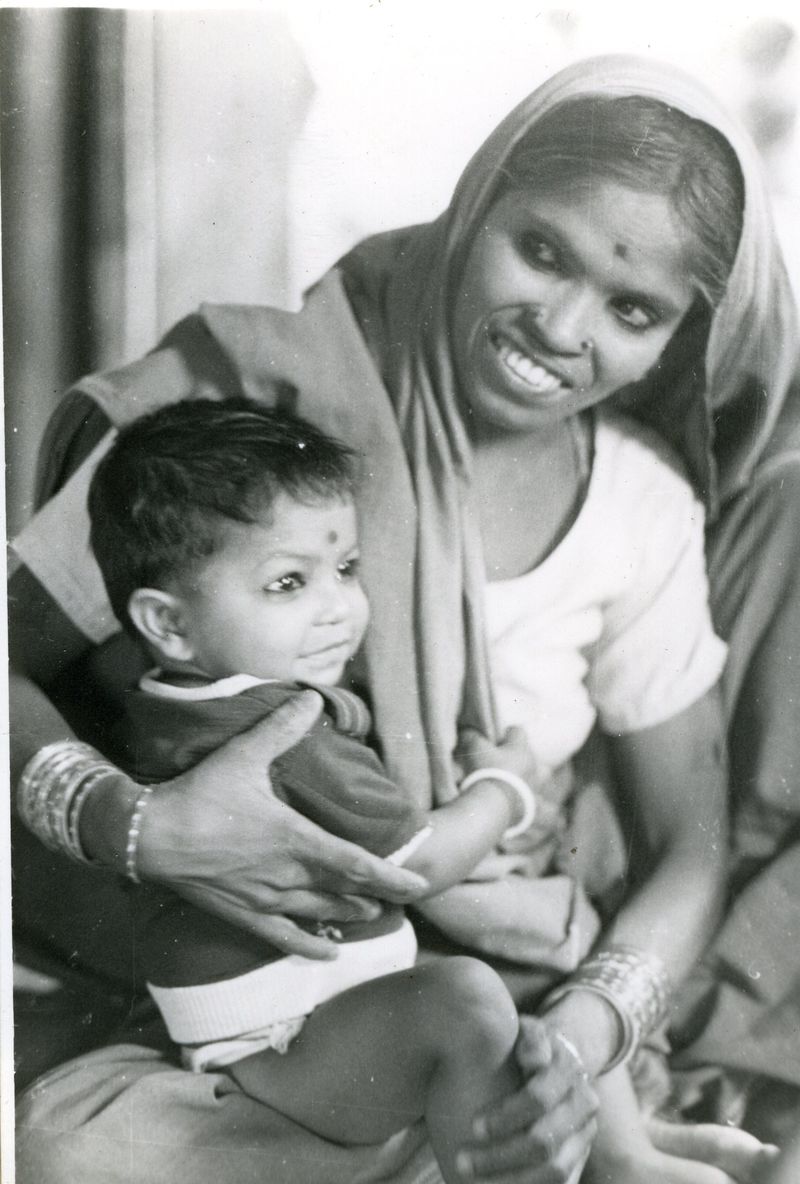 MC’s 50 th  anniversary has been a great occasion to reach across many friends, partners, donors, and supporters. Continuing with the spirit of celebrating early childhood, this year MC is participated in the Airtel Delhi Half Marathon-2019 on 20 th  October 2019, to inspire more supporters to run for the cause, spread the word, and donate to MC. HCL Foundation’s support has strengthened MC’s efforts to run community based crèches for the most marginalised children of women working as waste pickers and domestic workers of Noida. Their support has also enabled MC to train organisations in Lucknow, Chennai, Madurai and Bangalore to set up and run community crèches for vulnerable young children of poor working mothers. North Delhi Municipal Corporation, Mobile Creches, and PVR Nest joined hands to launch an innovative programme to run crèches within the premises of municipal schools of North Delhi. A weeklong campaign on the importance of crèches was organised by Neenv Delhi FORCES - a state level forum for crèches for young children, in November 2019. Live demonstration in the form of a crèche Jhanki (roadshow) drew public attention on quality services for young children. The door-to-door campaign covered 20 slum areas in Delhi and 30,000 community members signed the petition to demand quality crèches.

In mid March when crèches were shut down, MC distributed Anaj Mishran (high protein ready to eat food) to last children a fortnight. Little did we know we would not meet them for 12 weeks, and still counting! Since the lockdown was announced on 25th March, crèche workers have stayed in touch with families daily to check on children’s safety, health and nutrition.
MC grounded its disaster response around three pivots:

All emergency relief distribution was possible due to a strong network of community leaders, site teams of developers, field partners, local suppliers, and support from police, school, and civic officials. MC and its partner teams tracked relief requirements, procurement, distribution, and data tracking through phone and online modes. 24,083 HOUSEHOLDS MAPPED AT CONSTRUCTION SITES AND URBAN SLUMS, COVERED 4,569 CHILDREN UNDER 6, 21752 RELIEF KITS DISTRIBUTED by MC and Partners.

Support the nutrition of poor girls to aid education by Sapna