by Indian Association for the Blind 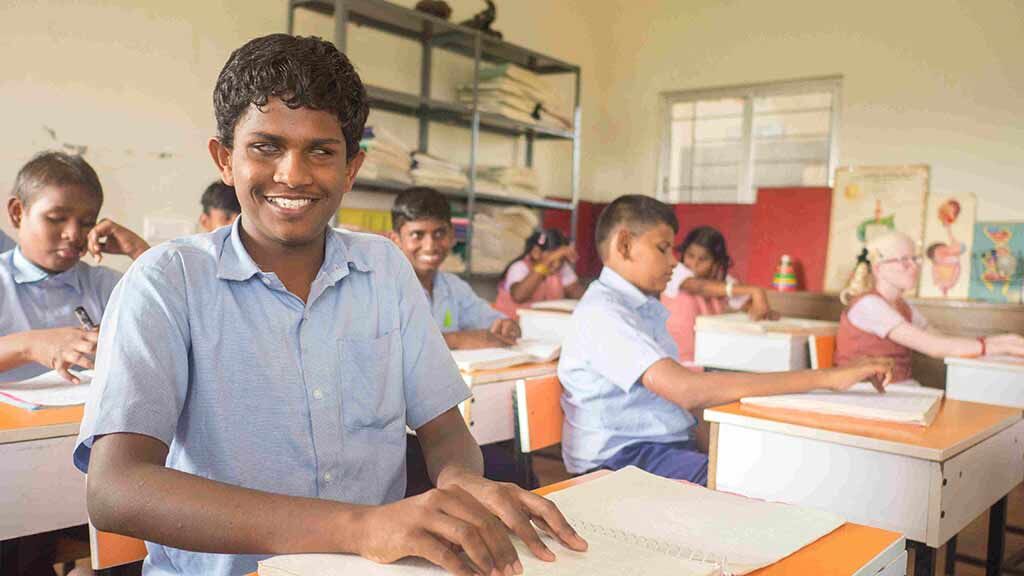 Kabilan lost his eyesight but not his will to thrive!

Kabilan was born with bad eyesight. He is from a poor family and his parents did not have the knowledge or resources to get him treatment.

For a large part of his childhood, his parents tried a variety of treatments they heard of. They even tried phototherapy without the supervision of a qualified doctor. This caused him severe nerve damage in both eyes. Several such ill-advised solutions made his condition worse and Kabilan’s family was feeling guilty and hopeless.

When he joined Indian Association for the Blind in class 4, his life changed. They taught him how to function without his eyesight. He learnt Braille and several life skills that improved his quality of life. He began to enjoy learning with his new tools. He was even able to pick up activities such as yoga and karate.

The positive impact IAB had on him made him believe that he could do whatever he wanted to. He has a special interest in computer classes and anything related to technology. He aims to be a Computer Science teacher when he grows up.

Nestled in the village of Sundararajanpatty in the outer fringes of Madurai in Tamilnadu, the Indian Association for the Blind (IAB) promises the visually challenged a life of confidence and opportunities.

Donations made to this program support the cost of groceries, fuel expenses, and the salary of the cook at the school. When you donate to the program, you will help in educating a poor blind child whose journey you can follow.

The Indian Association for the Blind (IAB) is popularly known as the temple for rehabilitation, that affirms its commitment to empower visually challenged people to practice self-reliance by providing comprehensive rehabilitation, education and employment opportunities to them.

With over 24 projects that enhance the quality and quantity of educational and employment opportunities, their activities have benefited 20% of the visually challenged population of Tamil Nadu.

The long list of awards that this association has been honored with includes the Millennium Award by All India Confederation for the Blind, New Delhi, CSR Award, IBN7 Super Idol Award and the National Award by the President of India. Providing assistance in education, career, and residence, the members of IAB are committed to raise the living standard of visually impaired people and help them travel the road to independence and self-reliance.

Indian Association for the Blind has

Your Fund fulfills their hungry stomach.

This project aims to provide nutritious & timely meals to visually challenged children. Being special children, they are facing difficulties both physically & financially. Some of the children have a partial eye sight but due to inadequate nutrition, they are losing their vision completely. Hence, we understand the pressing need of food for the underprivileged community. We are providing three times meal for children at free of cost. Currently 150 visually challenged people are benefitting through this program. They are from remote areas of Southern Tamil Nadu.

The ferocious waves of COVID throws many hurdles in each and every life. Many children had lack of food with no safe environment. Initially, it was difficult to follow the necessary protocols like establishing a safe, hygienic and secure campus, social distancing, frequent handwash, wearing masks etc. Later, we taught them about the necessity and severity of COVID. Also, we were in lack of essential items like masks, sanitizer etc. and by GIVE INDIA’s support, we were able to provide timely & nutritious meals without any delay.

Impact story from the ground: Amutha, aged 18, is a visually challenged girl by birth. Born in a lower middle class family where having a meal a day is a battle. Her parents are astrologists and she has one elder sister(Visually challenged) and a younger brother. Due to her father's single income, her parents have only one time meal, and sometimes that too is not possible. Then she came to know about Indian Association for the Blind (IAB). She and her sister got admitted here. From that day, they had been receiving good and healthy meals. During COVID, her family also got supported through free ration kit scheme. 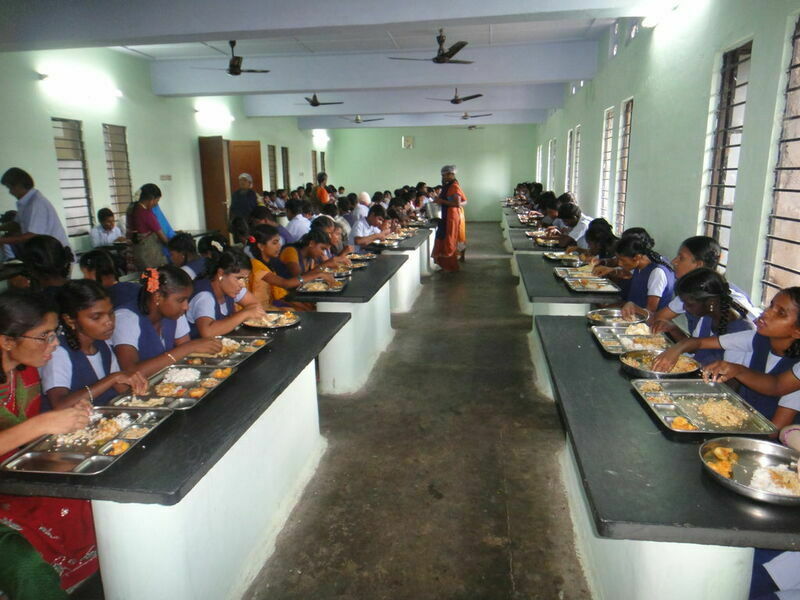 Amutha – hungry no more is studying in 12th standard at Indian Association for the Blind School. Her father is a worker in a Daily Wagor and mother is a housewife. She has one sister who is also a visually impaired. She starts her day without eating anything. She relies solely on other for her education & the meal for wholesome, nutritious food.
After joining at Indian Association for the Blind (IAB) she received quality education along with 3 times wholesome meals & accommodation. She says that she feels better and satisfied and also has become regular in school after she had admitted here.
On behalf of INDIAN ASSOCIATION FOR THE BLIND(IAB), We thank you for your generous donation of towards the Feed a visually challenged Project. Your contribution will go a long way in helping us serve thousands of needy children.

Thank you for offering meals 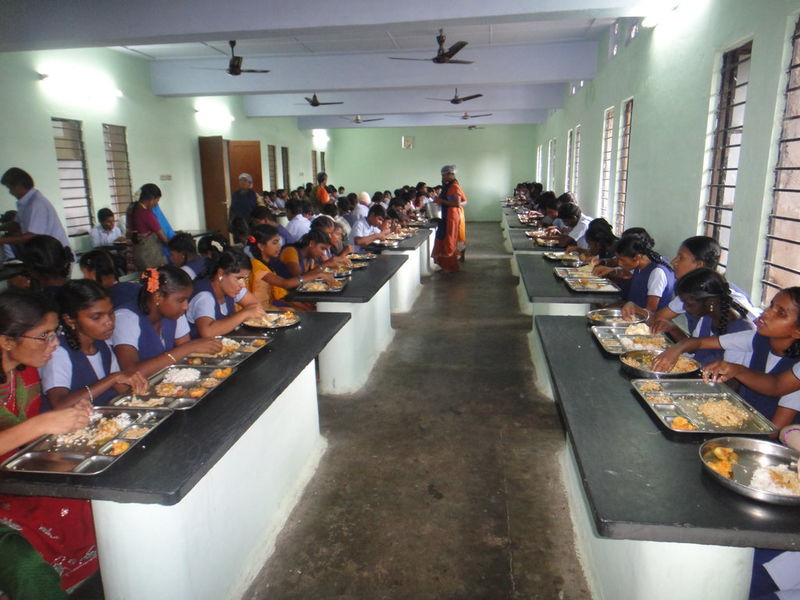 Thank you for offering meals

Your support has helped us to feed more than 100 + visually challenged students who haven't had three meals a day. They are from socio economic background deprived of basic amenities like food, environment etc..

Nutrition rich foods like cereals, wheat, Ragi were included in their meals regularly. We are more conscious on avoiding packed snacks and healthy snacks like chikki balls, grountnut bars are prepared in our own kitchens and served to them.

Students are hale and healthy and they can focus on their studies. Medical attention has gradually reduced.

IAB provides three times meals for the visually challenged students and employees those who are from socio-economic background. This program offers healthy and nutritious meals to the students.
Healthy and timely food helps them the students to be active and focus on their studies.
Last year, we have renovated our dining hall and kitchen area with all necessary amenities for VI.
Healthy snacks like sprouts, Chikki’s are provided to students instead of junk foods. Morning & Evening tea and biscuits are also offered which makes them more refreshing. Students health level is monitored periodically and based on the report additional care for the needed kids.

Veerasanjay was born as visually impaired in a very poor family in the small town of Thirumangalam. His parents are construction labors with very poor wages. As they had to report at the working site at very early hours, Sanjay was not taken care of. Even one meal a day is a distant dream for him. With their poverty, education became not as important for them.
Since he was deprived of good food and health care, he was an undernourished child. He would be too tired and weak to focus on anything by evening and would fall asleep after dinner. He was sent to a nearby school which had no facilities for CWSN. But he has an irresistible desire to learn. Their parents came to know of IAB institution which is being run exclusively for VI.
After he was enrolled in IAB, he was given nutritious food and his health improved remarkably. After regular intake of the nutritious and tasty mid-day meal with proteins, he started to gain strength. At least one good meal is essential for a child’s well being and development. As a result, he developed a significant interested in education and extracurricular activities like football, cricket, etc.
One healthy meal can make a big difference in a child's future.

Indian Association for the Blind's Update 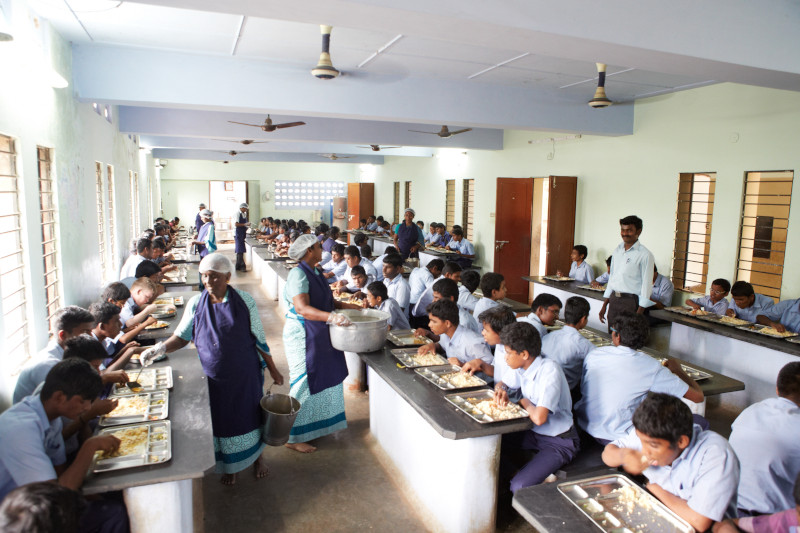 Students are provided with highly nutritious and healthy food. Reserve Osmosis is installed for the drinking water to ensure the student's health. Monthly monitoring on food items is done.

PETER IMMANVEL belongs to a very poor background. During his admission to our organization he was very weak and nutrition less. Due to his weaker health, he cannot able to focus on his studies. Day by Day he was fed with healthy and timely food. Now he feels better and medicine intake level has reduced. Now he feels healthier and much focused on studies.