Educate a visually impaired child by Indian Association for the Blind

by Indian Association for the Blind 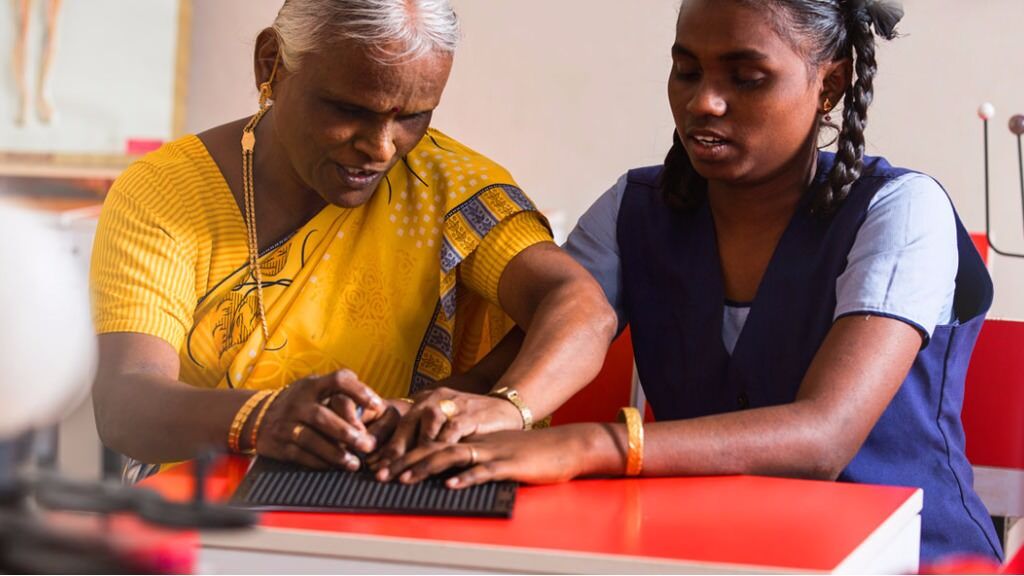 Amudha did not believe that anything limited her.

Amudha’s story of strength and hope had an unbelievable start. When she was born, **her parents were disappointed to have had a girl. Since she was also visually impaired, they thought that she would become too much of a burden **and left her with her grandfather.

Amudha’s grandfather believed in her. He did not think that being a girl or being visually impaired determined her future. He motivated her to stay in school and to continue secondary education at The Indian Association for the Blind.

IAB gave Amudha the chance to learn the same syllabus as children across India. She completed class 12 with their help and went on to get a Bachelors and Masters degree in History, followed by a B.Ed from Stephens.

Today Amudha is a teacher in a government school in Tamil Nadu. She is a pillar of strength for her family and a source of inspiration for many around her. She motivates those who think that life is unfair by showing them how she could change her story with the right help.

The Indian Association for the Blind is committed to empowering the visually challenged by providing them with the best possible education. IAB took its first step by setting up the IAB Higher Secondary School in 1992. The effort and commitment of the teachers have paid off with the school achieving almost 100% results in the class X and XII board exams since 1995.

The School follows the same syllabus as institutions for sighted children. It is only the method of instruction and mode of examination that varies with students writing their board exams with the help of scribes. The IAB Higher Secondary School started with just a handful of students. Today it is the only co-educational higher secondary school of its kind in Tamil Nadu with well-equipped classrooms, computer labs, libraries and a playground.

Donations made to this program support the cost of uniforms, shoes, braille material, and staff salaries.

The Indian Association for the Blind (IAB) is popularly known as the temple for rehabilitation, that affirms its commitment to empower visually challenged people to practice self-reliance by providing comprehensive rehabilitation, education and employment opportunities to them.

With over 24 projects that enhance the quality and quantity of educational and employment opportunities, their activities have benefited 20% of the visually challenged population of Tamil Nadu.

The long list of awards that this association has been honored with includes the Millennium Award by All India Confederation for the Blind, New Delhi, CSR Award, IBN7 Super Idol Award and the National Award by the President of India. Providing assistance in education, career, and residence, the members of IAB are committed to raise the living standard of visually impaired people and help them travel the road to independence and self-reliance.

Indian Association for the Blind has

Your contribution helps them to purse the dream of Education. 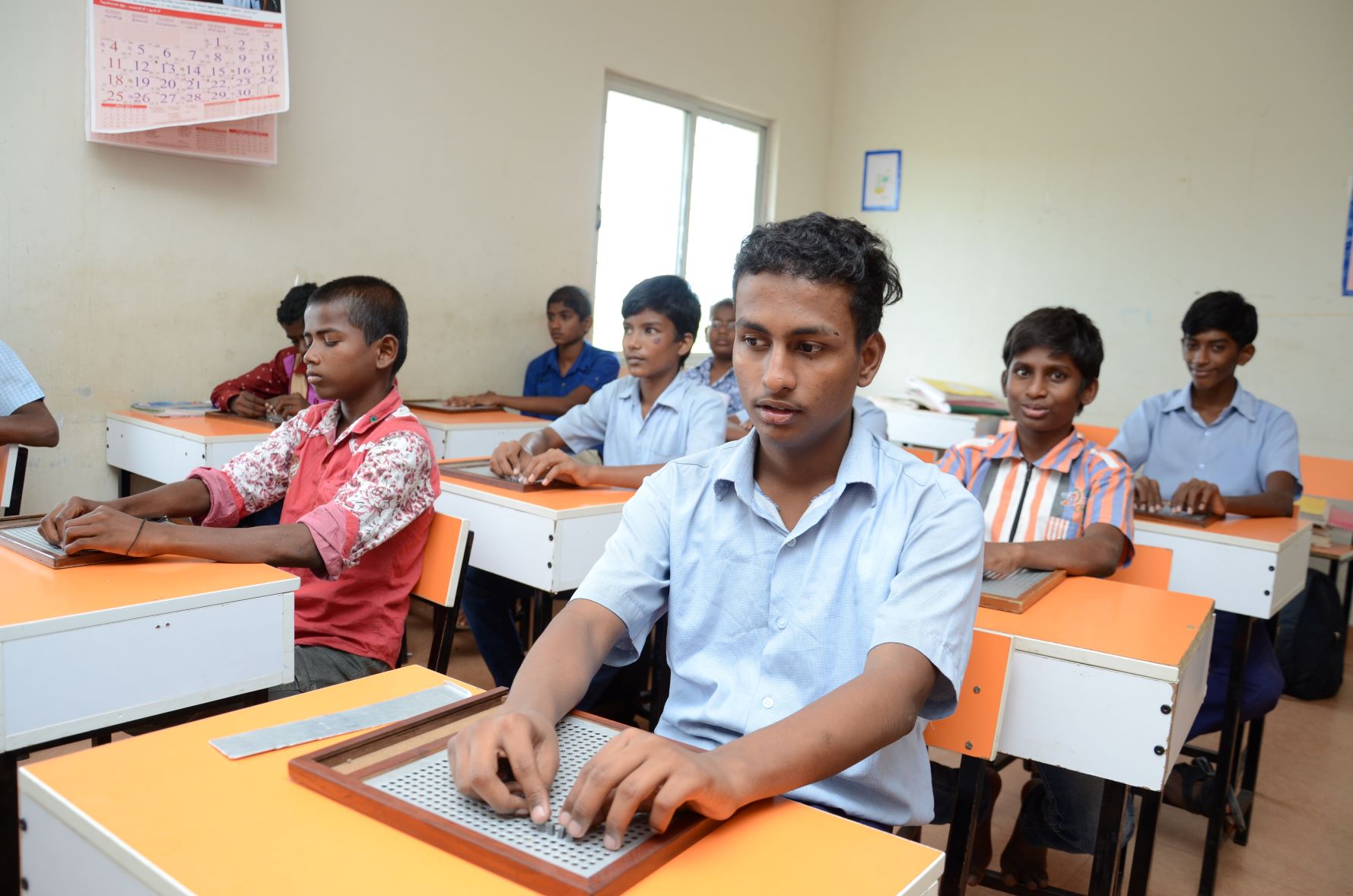 This project supports the socio-economic visually challenged students with standard education. Due to COVID, Physical classes were halted and moved to virtual classes. Different Meeting Rooms were created, and classes were conducted by our regular teachers from their residences and later from school. Both the teachers and students were given dedicated training on online training pedagogy. It was amazing to see that they raised our expectations and the online classes were almost as effective as the regular classes. The routine chores like assessments, improvement plans, separate coaching for the slow learners were all conducted through the audio bridge. Now they are comfortable and excel in online platforms. Nearly 75 visually challenged students were benefitted from this program. The majority of them are from the southern Tamil Nadu region. It's very happy & proud to see that visually challenged students on par with normal students are studying online.

The COVID-19 pandemic has not stopped at national borders. It has affected people regardless of nationality, level of education, income or gender. Education is no exception. During the pandemic, remote learning became a lifeline for education. The government has taken measures to help students learn at home. When it comes to visually challenged students education, it is quite hard to frame the pattern of virtual classes. We strived our best to ensure that there is minimal loss in imparting education to our students. Team of teachers worked on different applications & software in finding the best and many mocks have been conducted. Based on the outcomes, we conducted online classes through dedicated Audio Bridge subscribed through Tata Telecom. Access to the Internet is quite challenging today in certain areas. As Government has planned to open schools for Grade 9- 12 by Sep 1st. The mode of teaching is back to physical classes and students were back to school. Special care will be provided for the students who need it. Emphasis them by maintaining safe and social distancing, Frequent washing of hands etc by awareness audio /video.

Impact story from the ground: Hi, I am Anushya, daughter of a daily labourer studying in Grade 11. I have completed my Grade X with good marks. I feared that COVID Lockdowns and shutdown of schools will let me down from the path of my Educational Journey. But never. With the help of the Indian Association for the Blind (IAB), I am continuing my education online. Initially, I faced many struggles like Basic Mobile, inadequate Data plans. IAB has provided smartphones. My class teacher, helped by downloading Audio Bridge software to attend online classes, read books and submit my assignments. Study Materials are also provided to my home by my School.Received a lot of support for my education from the Indian Association for the Blind (IAB) through GiveIndia & their donors.

Educate a Child; Strength their future 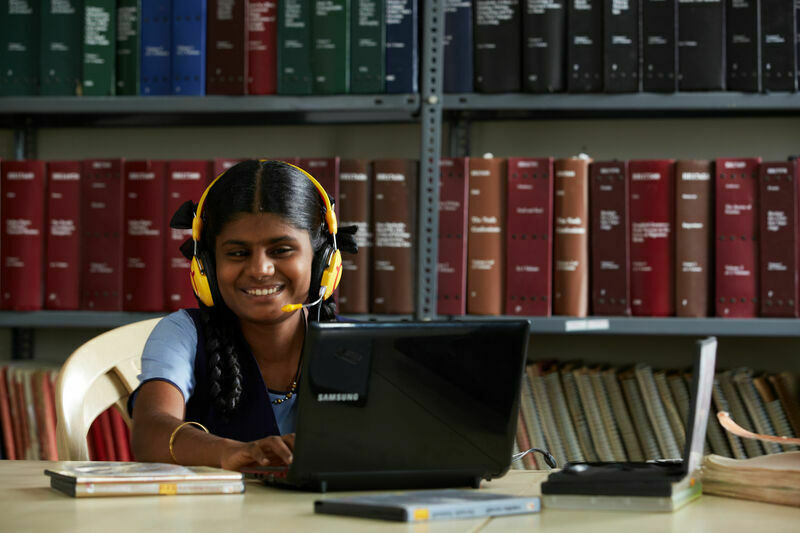 This program supports us in providing the special education to the visually challenged children who belong to below poverty line.
Due to this COVID Crisis, physical classes are stopped and classes are being taken through online mode.
As this is a completely new approach in case of school students , they are much excited and enthusiastic in learning their classes. Visually challenged students have learnt more in field of technology by using Google Meet, Zoom Etc. With this technology bases education, Visually challenged students benefits a lot by recording their classes, hints rather than physical writing which saves their time.
We have arranged one to one weekly assessments to monitor their performance and additional sessions will be conducted for the needed ones.
They are preparing & submitting their assignments independently and attending their classes, exams promptly. From last week , Physical Classes for Grade XII & X has been started considering their board examinations. With respect to Government rule, offline classes for other grade will be soon started.

Thanks for educating us. 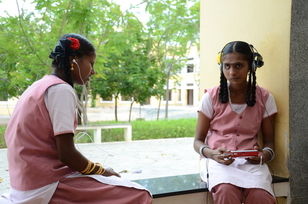 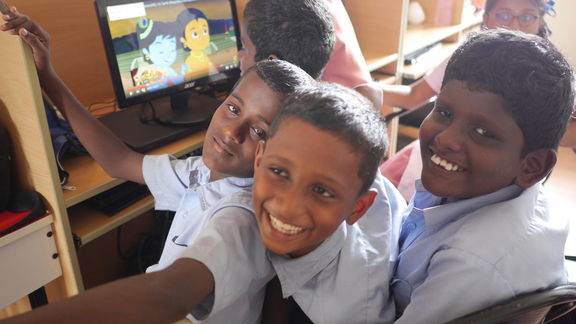 Thanks for educating us.

As part of entertainment, we have celebrated school annual day programme and executed our excursion trip etc . Several competitions like eloquation, speech were conducted through
Elakkiya Mandram and interactive clubs.
Students have actively participated in sports day celebration. Events like March past, yoga, karate were took part in that occasion.

Year 2020 had started up in a pleasant takeoff and unfortunately COVID 19 has messing up it. Hope we all bang back with safe and healthy. 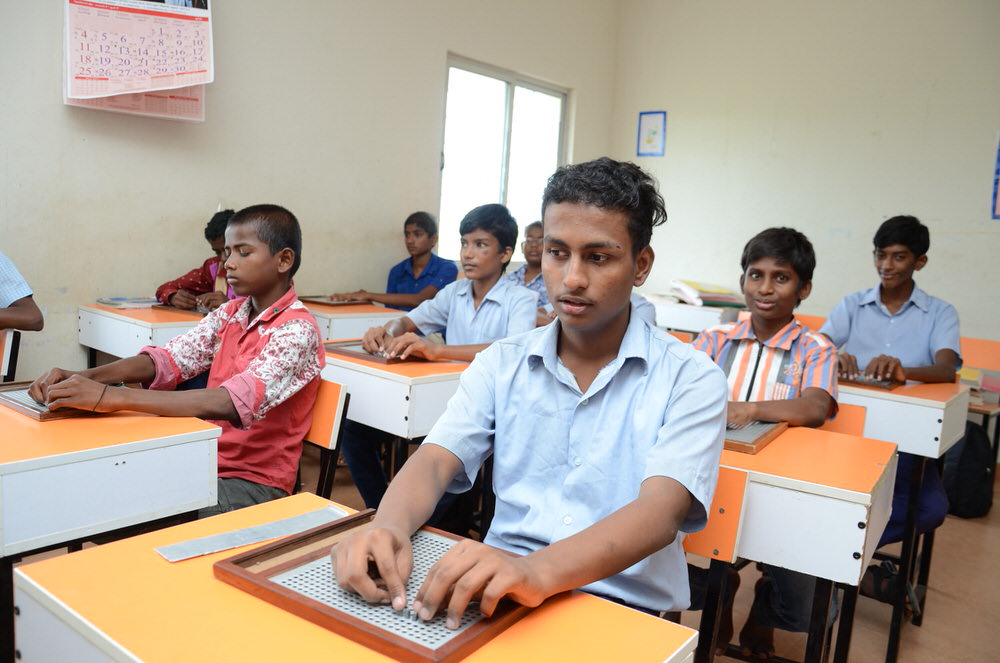 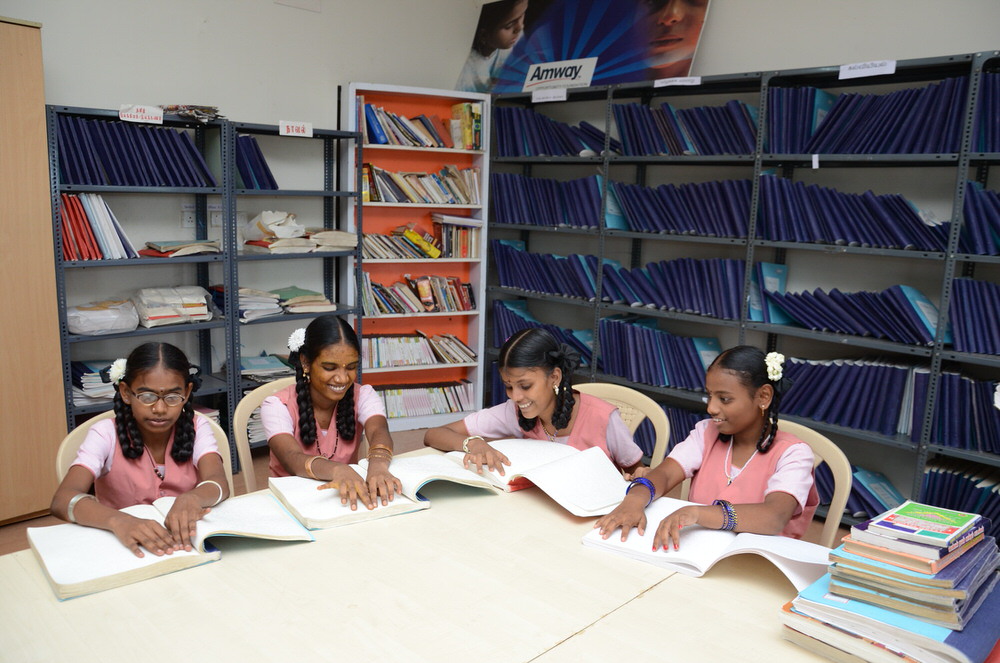 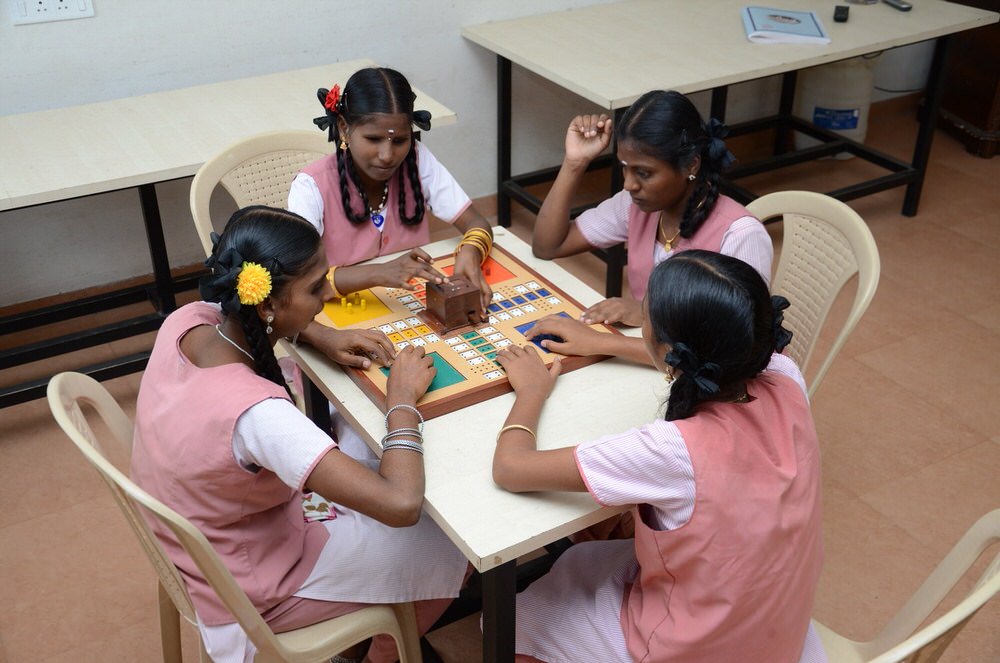 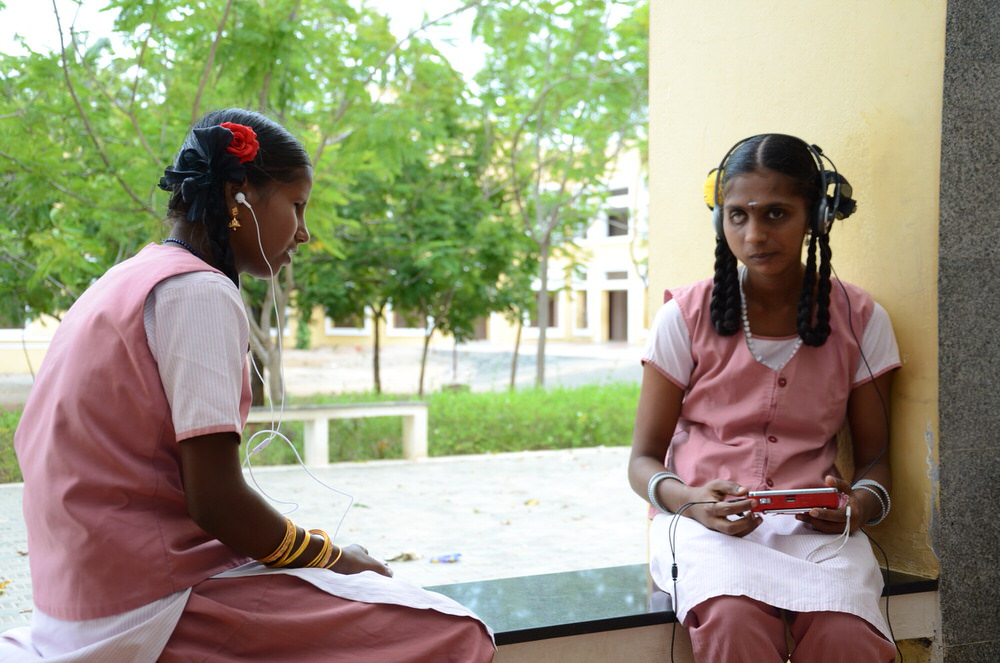 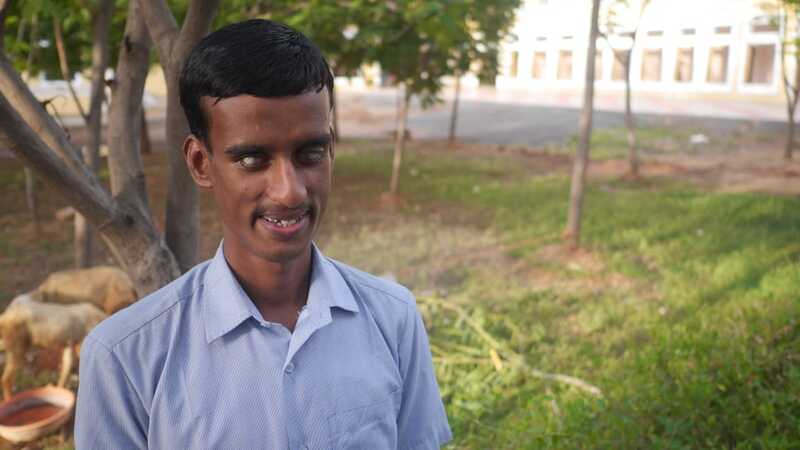 We have mainly focused on technology based education like using smart classes. Students can record their lesson and retrieve it anytime anywhere . Now a days they are using smart phones as their learning aid.
Our Students have been honored by our Honorable Governor,Mr.Banwarilal Purohit for being the champions in state level Braille reading and writing tournament. Several day celebrations like white Cane day,International White Cane day were celebrated with several competions like essay writing, elocution, etc..
As treat for an eye , our students were taken to pettai Movie as an entertainment. Another feather on a cap – IAB students showcased their performance in Board examinations with 100% result. training on E-pub file creation, computer and android mobile is conducted .

Gurusamy belongs to a remote village in Tamilnadu. His parents are daily wages and the annual family income is less than INR 40000. He is born blind. He had to discontinue his studies due to his blindness and family’s financial status. But his dreams of serving his society never stopped him.
He studied at home by his friends and later his family came to knew about IAB. Initially, his parents refused to send gurusamy to residential school. IAB team members convinced them by creating awareness of the importance of education in life, especially for visually challenged students.
Occasional support and a few words of encouragement were all that was required for this miracle to happen.
Then he admitted in IAB. With the help of teachers and donors who covers his educational expenses, gurusamy excelled well in his studies and obtained a good percentage in Grade X. Now he feel s happy and build a confidence that he can achieve his dream and support his family.
Gurusamy can now speak English, and the confidence is amazing. He is not only self-reliant but supporting his siblings in studies as well.
Today, he is studying in class XI and he aspires to pursue a bachelor degree in social welfare studies.
Children like Gurusamy can safeguard their future if they get a second chance at life.

Indian Association for the Blind's Update 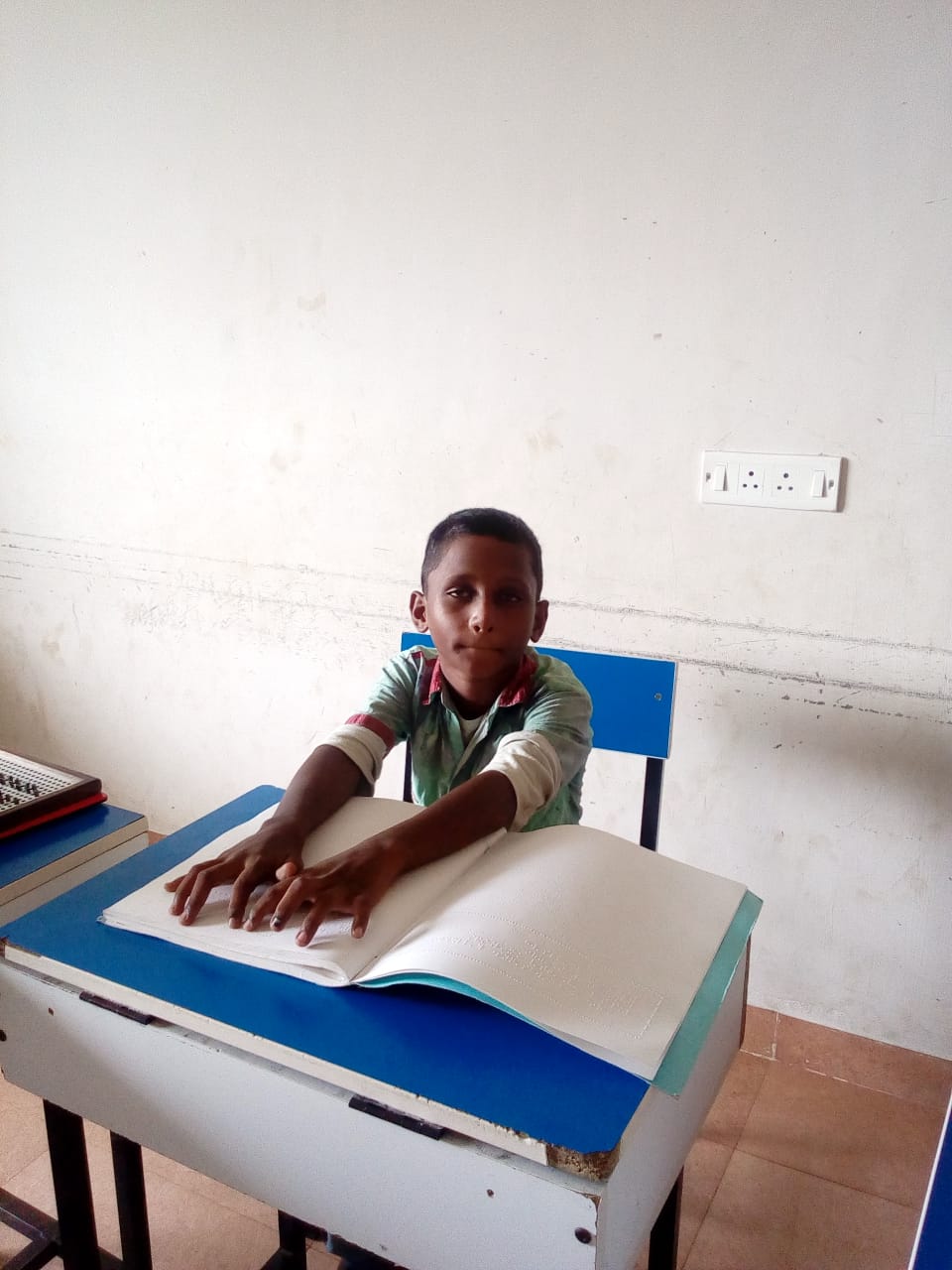 Several new initiatives has been implemented in the last 6 months. Increased the learning sessions of Computer class, Spoken English and Moral studies. Literature meetings, Motivational workshops have been conducted for the development of students. The educational visit had arranged to learn the theories effectively instead of memorizing. Special care is being given for slow learners. Students have cracked their quarterly examinations with good results. Day celebrations (Independence Day, Environmental Day) are celebrated by the way of creating awareness and realizing their responsibilities in today's world. We are planning to bring Visually challenged students as par with Normal students in all the floors (Education, Games, research etc..)

Master Sivaraj is a young and energetic boy belonging to very poor family. His eye sight keeps deteriorating day by day. Her parents are daily wages. Their family income is not up to the level. Though his educational expenses become a barrier for his father he never ready to give up sivaraj's education. Till last year sivaraj studied in nearby normal school. He cant able to perform well due to his sight problem and lack of braille knowledge. He struggles lot. After joining in IAB, he studied Braille language and got confident that he can achieve his dream. He is very happy and now he can able to read , study and write in Braille.