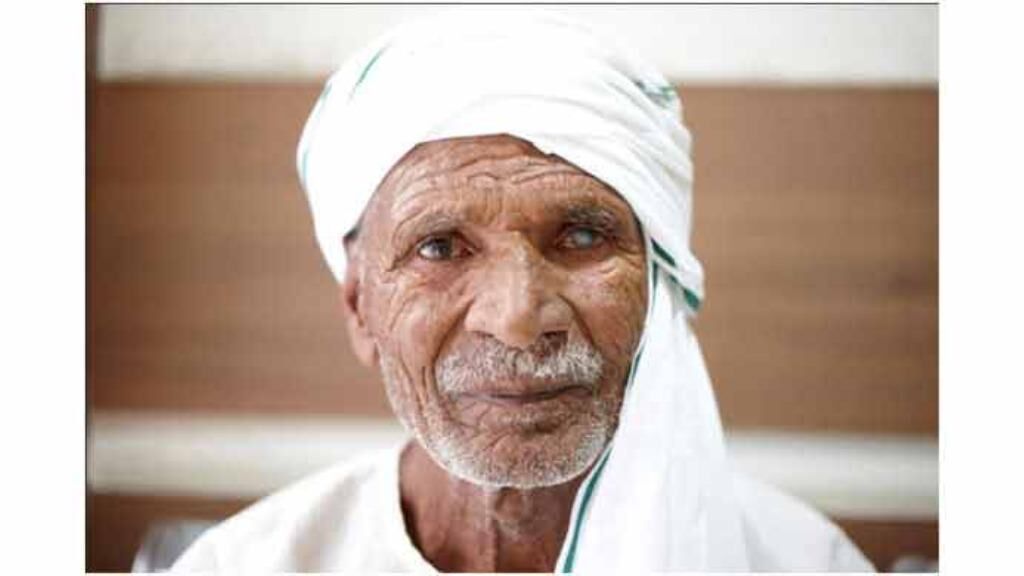 Nathu Lal is a forest guard from Bhadurpur in Uttar Pradesh. His hardships began when he became paralyzed. He earned very little because of his bad physical condition and all his earnings went in making sure his three children got married.

His situation became worse when his vision started to become hazy. When he attended an ICARE eye screening camp, the doctors informed him that he had cataract. He knew that he did not have the money for an operation and the hospital expenses. He felt completely hopeless.

He did not want to get into the ambulance to go to the hospital and tried to stay back. That was when he found out that the surgery would be free. He was thrilled to know that for once, he was getting the care he deserved.

He was taken into the base hospital along with other patients. He was examined again and his operation was done was successfully the next day. Although he still has a tough life, being able to access this surgery gave him the strength to go on.

Rural elderly poor have little or no access to eye care facilities. Often suffering from easily treatable ailments, such as cataract, they are forced to live with blindness. ICARE's Outreach Programme aims at providing these services to the elderly and empowering them to lead an independent life.

Patients requiring surgical interventions are identified through free eye camps and are transported to ICARE Hospital in Noida.Surgery is performed the next day and on the third day, the first postoperative examination is done. Patients found fit are discharged and sent back by ambulance.Their stay, food, medicines, transportation, and surgery is provided free of cost. Postoperative follow up is done at the campsites to help the elderly to avoid traveling back to the hospital.

An average number of 738 surgeries are conducted per month. With a small donation, you can become the reason for someone to see the world.

ICARE was established with the aim to provide quality ophthalmic services of International Standards to all sections of society at an affordable cost. With 2 centers at Noida, state-of-the-art equipment and highly skilled workforce they provide comprehensive diagnosis, treatment and surgical services covering the entire range of ocular sub-specialties that are comparable to international standards.

As an NGO, their Outreach Program provides the same standard of eye care to the underprivileged rural population in the community. This program arranges around 900 screening camps and treats approximately 150,000 people annually for eye disease. They perform around 15,000 surgeries annually that are either free or at a very subsidized cost.

Their valuable support was acknowledged by the Uttarakhand State Ophthalmological Society when they were awarded the Community Ophthalmology Award. 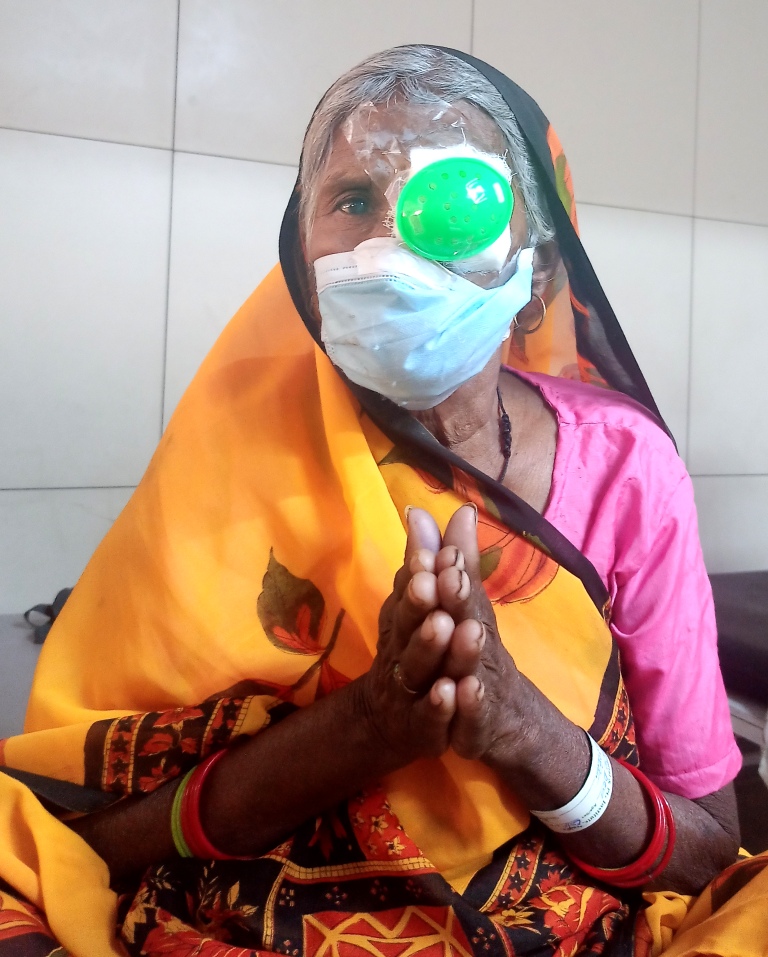 In 1982, Ishwar Charitable Trust was established with the paltry amount left upon the demise of Dr Sushil Choudhry’s mother, it was set up, to provide qualitative ophthalmic care to all sections of the community particularly the rural needy. ICARE Eye Hospital & Post Graduate Institute a unit of Ishwar Charitable Trust was established in 1993, has been providing free of cost eye care services to rural/urban underprivileged communities in the National Capital Region (NCR) for the last 29 years through its Rural Outreach Programme Operating on a hub and spoke model – screening and collecting patients requiring surgery from remote Rural Peripheral Centers (RPC’s) and urban slums, bringing them to the hospital and providing them high quality diagnostic, surgical, post-operative care, three days stay and transportation to and from the hospital at no charge.The hospital has screened 41.81 lakhs and restored the eyesight of 3.27 lakhs patients. Out of these total numbers, almost 65 per cent of work is for Charity. In FY 20-21, ICARE examined over 1,20,000 screenings and performed more than 14,000 surgeries of which over 7,800 (nearly 55%) were charitable, making it an organization with the largest proportion of charity compared to any other ophthalmic non-government hospital. “The free surgeries were achieved with the help of revenue generated from the surplus generated from our paid wing and help received from individuals, corporate, NGOs and other good wishers”.

The Coronavirus pandemic has brought life to a standstill all over the world. The worst affected are the lower socio-economic strata of society, daily-wage earners, migrant workers, the homeless and the poor elders. These needy people continuously face enormous challenges for healthcare in terms of availability, accessibility and affordability. To address this challenge, ICARE is now prepared for a tectonic shift. The new normal brings new challenges, new work patterns and an opportunity to reflect on our practices. We have enhanced our working with Clinical & Non-clinical training, occupational health & safety protocols, in line with available International National Guidelines. Despite these changes, we currently face enormous financial challenges in continuing our present work. We can overcome the challenges if we get enough support from our good wishes to support the free surgeries for the underprivileged.The goal of our organization is to be able to provide 1700 free cataract surgeries within 6 months.

Patient Name – OmwatiHusband Name - DeepakMRD No – OP62724 Age: 80 yrsGender - Female Address – Village Sabota, Gautam Budh Nagar, U.PEye operated – Right Eye (PHACO+PCIOL) Date of Surgery: 10-08-2021Aadhar Card - 283328610738Omwati, 80 years old lady toils day and night along with her husband in a small piece of ancestral agricultural land, she has two sons and a daughter. She hardly got any help from her in-laws and husband to raise her children with great difficulties she managed to provide basic education to her children and got them married. Omwati's life only got bleaker with her vision gradually failing over the years and she had no clue as to why it was happening. She was helpless with her condition and started living thinking of it as a curse. One day she shared her pain with her daughter, her daughter knew about the charity work of ICARE through her mother in law and told her not to be a worry about the treatment. Omwati and her daughter in law reached ICARE on 10th August 2021 for the eye checkup at ICARE Eye Hospital. The doctor after a thorough examination diagnosed her with a bilateral cataract case, she was advised for surgery. Omwati shared with the doctor about her financial condition and requested support. On the same day, her right eye was operated first free of cost. A simple cataract surgery saved Omwati's eyesight, giving her the ability to do take care of her life and her family with more strength and courage. She is thankful to GiveIndia for the financial help and wishes to come back for getting her left eye operated on after few months. 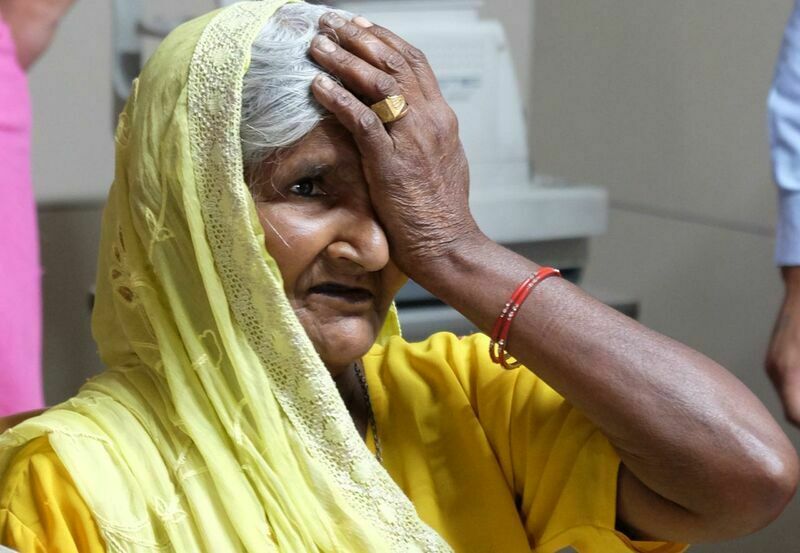 Out of the 39 million blind people worldwide, there are over 18 Million blind residing in India. This makes every 3rd blind person in the world an Indian and makes India the country with the largest absolute number of blind people in the world. According to the National Blindness Programme for Blindness Control, cataract is the single largest cause of blindness in India (62.6%) of total cases followed by refractive errors (19.7%). Both these causes are easily treatable. 90% of the blindness in India is avoidable through prevention or cure and is mainly related to cataract in adults and refractive errors in children. Blindness mostly affects the most vulnerable segment of the population – the elderly – and can cripple not just the lives of these individuals due to dependency and exploitation but also that of their families. They try to seek services that are distant and of questionable quality and at a cost beyond their reach. To expand its reach and relevance ICARE conducts a rural outreach program to provide modern Eye Care Services at the doorstep. ICARE over the last 26 years has been providing sight care services to all sections of the society irrespective of the person’s ability to pay.

ICARE does this by conducting over 1200 screening camps each year at its rural pick- up centers in neighbouring states of Haryana, Uttar Pradesh and Rajasthan. Patients requiring detailed examination or surgery are transported to ICARE Hospital at NOIDA. Post surgery they are dropped back to the campsite from which they were picked. Their 3 days stay, surgery, board and lodging including their transport are all free.