by National Society for Equal Opportunities for the Handicapped 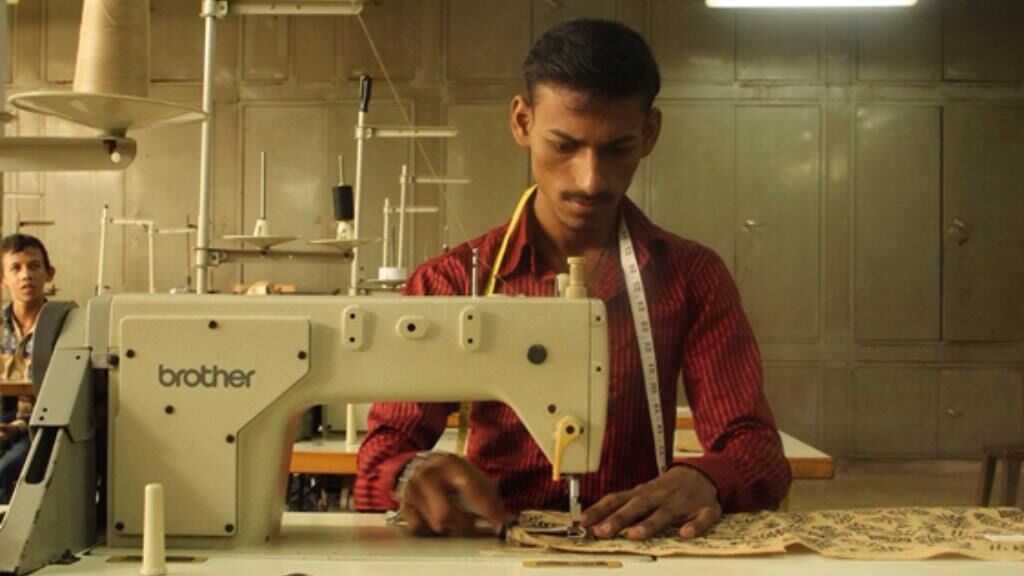 Polio did not stop Vitthal from providing for his family

Vitthal is from a poor family and is the eldest of three siblings. He had to start earning from an early age to help his family make ends meet. This was harder for him than most people.

He had an acute attack of polio when he was just three years old. He soon lost function in his right leg and could not walk. He had to drag himself around for years after the illness but he was determined and would not give up.

By the age of 14, Vitthal pushed himself to walk with a lot of struggle. He completed class 10 and joined NASEOH’s Vocational Training Unit.

The unit’s social workers trained him in tailoring and gave him a sewing machine. He has set up a shop at home with this and earns around Rs. 5000 every month. The unit also gave him mobility aid that helps him move around. These contributions enable him to look after himself and his family.

You can donate and help train a differently abled person like Vitthal. You can give with confidence because every program on our platform is GIVEASSURED. A little help from you will give them a chance to earn and lead a life with respect and dignity.

As one of its core activities, NASEOH runs a Vocational Training Center for imparting vocational training to the differently-abled. The key objective of the programme is to ensure employment for the differently-abled and providing them with economic independence. Apart from trades like Pottery, Welding, Gardening, Tailoring, Electronic assembly, Computers, and Baking, beneficiaries are also trained in Communication Skills.

Beneficiaries are first assessed by Social workers and paramedics for occupation suitability, according to which they are assigned trades. The training provided is completely free of cost, after the completion of which the trainees are given placement assistance, either in the form of external placement or self-employment. NASEOH's students have secured employment as Clerks, Telephone operators, Computer operators, Machinists, Binders, Tailors, Data Entry Operators etc.

National Society for Equal Opportunities for the Handicapped

National Society for Equal Opportunities for the Handicapped

The concept of creating an umbrella organization for the differently-abled emerged as a result of a conference held in 1968 on "Rehabilitation of the Differently abled", following which a group of eminent professionals, doctors, and social workers came together to establish the National Society for Equal Opportunities for the Handicapped (NASEOH).

Apart from this, NASEOH also assists the differently abled by identifying and providing them with suitable mobility aids like wheelchairs, calipers, tricycles, crutches, and splints. Most of these appliances are manufactured in-house by trainees and employees in their Welding workshop in Mumbai. 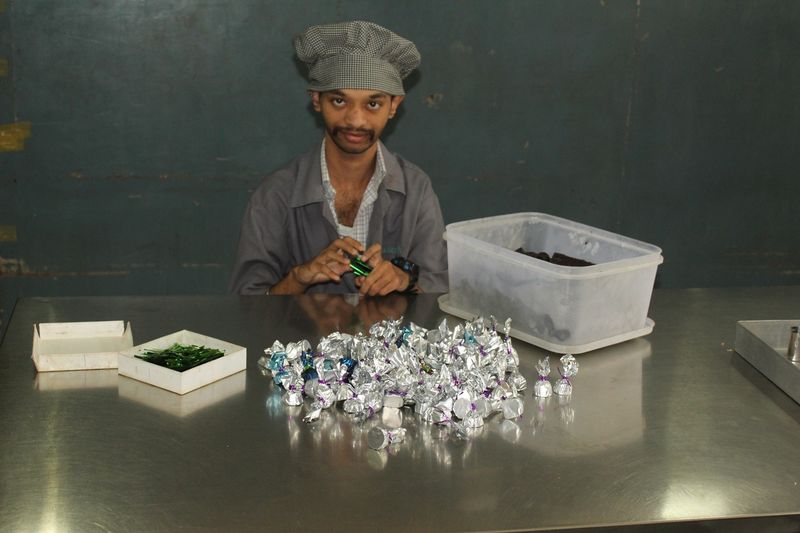 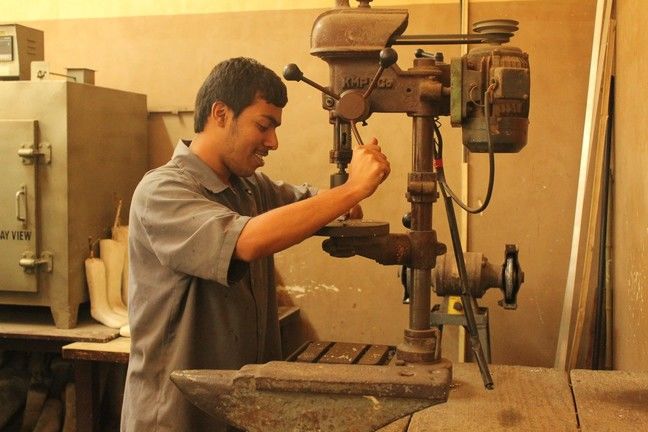 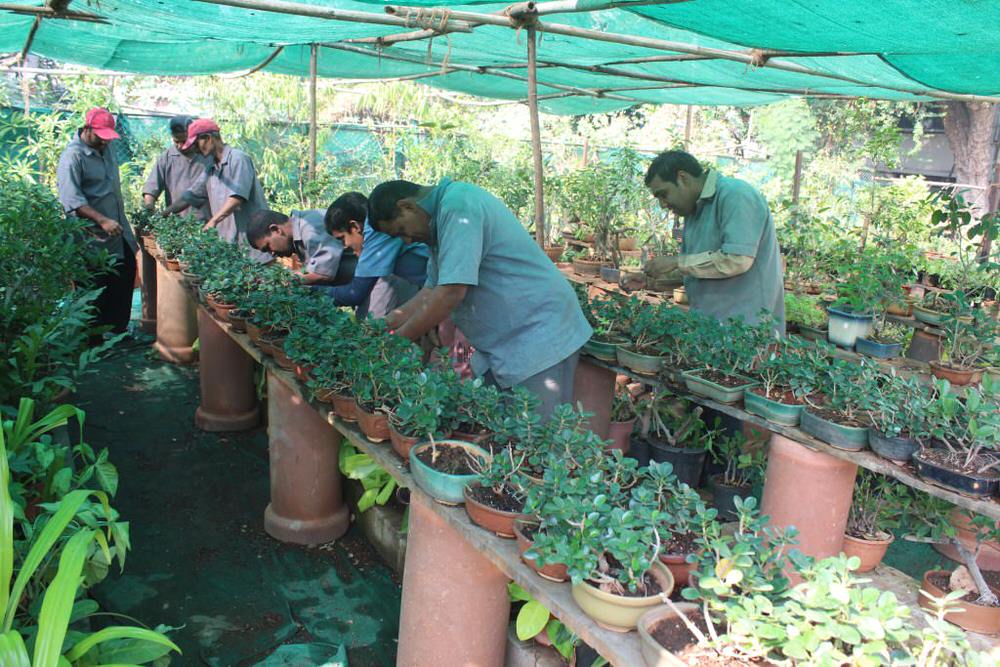 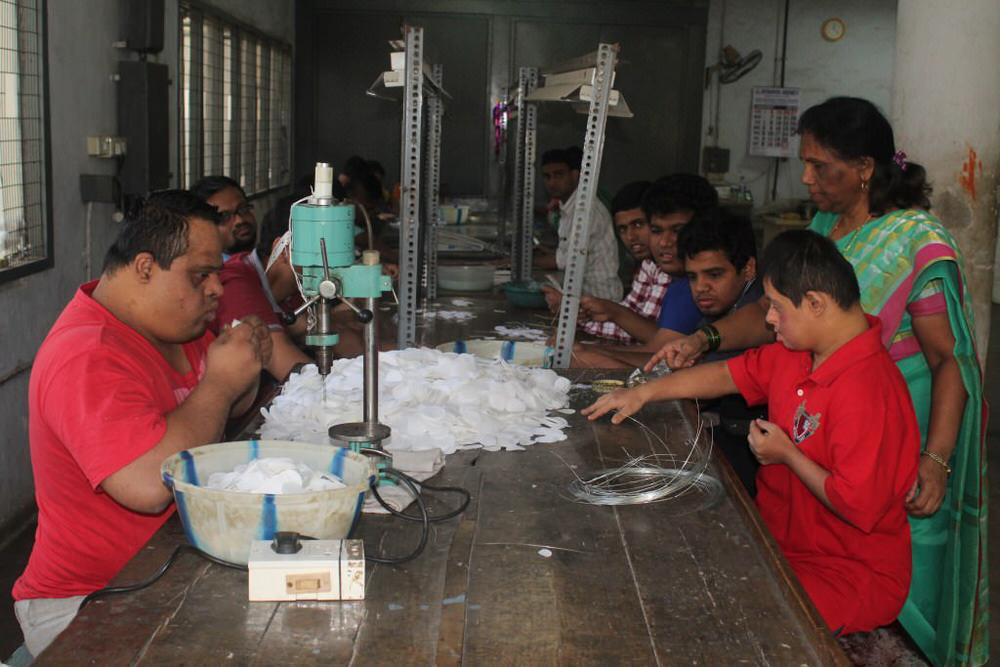 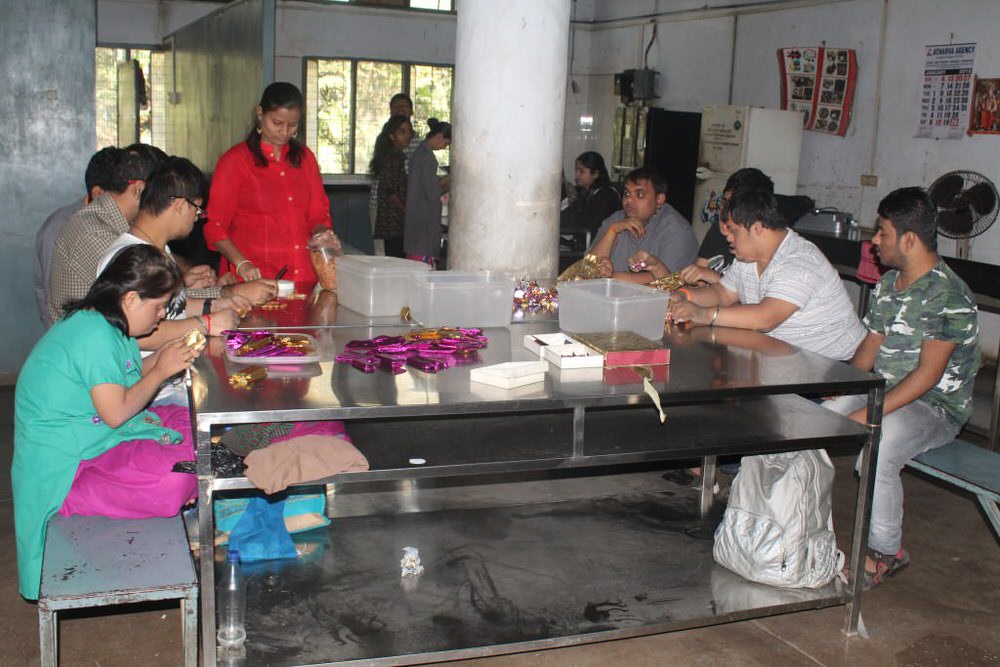 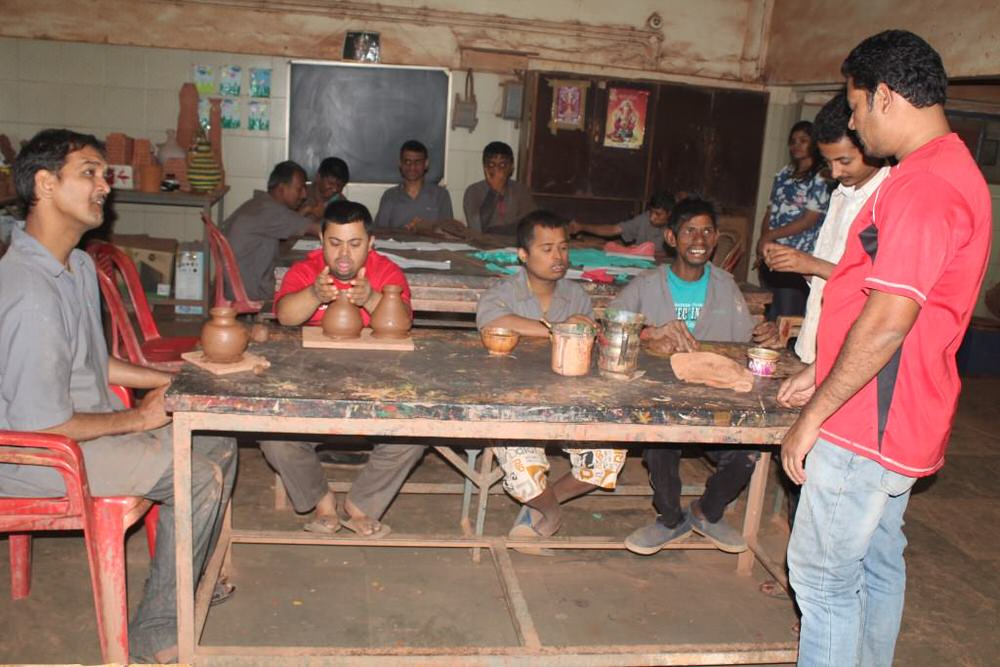 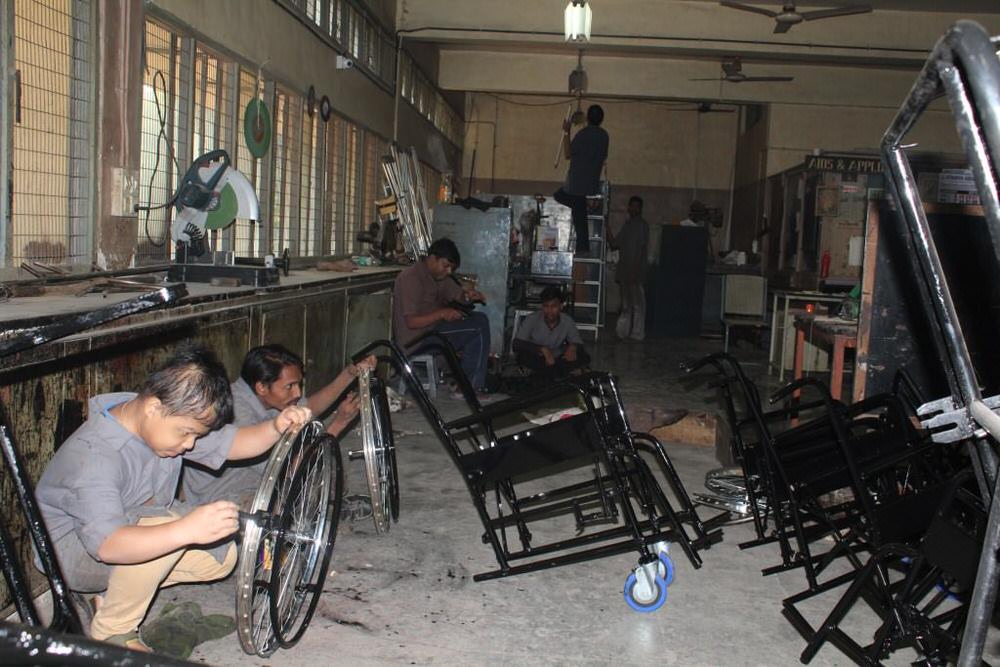 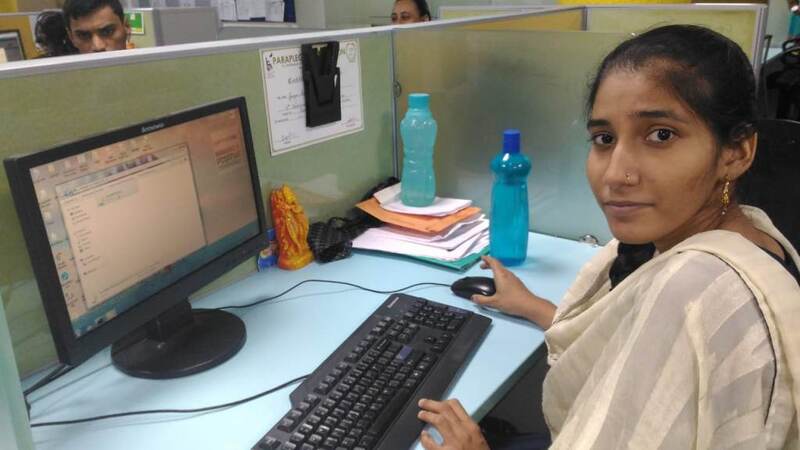 In the last quarter we have distributed 12 tricycles to the needy disabled persons, out of the donations received through Give India, though we keep getting continuous requests for this support.

Sponsor Vocational Training NASSEOH has been focusing to build capacities through the various vocational skill development program for the disabled persons. Employment and income generation options are the most important factors which help a person with disability in addressing his multiple issues and challenges. In the last quarter the donors supported 7 persons for three months Vocational Training. We need more support to NASEOH in sustaining this core activity.

PICNIC : Dated: 30.12.2018 It was winter time. The weather was idyllic and cajoling. The old inmates pined for a break from routine. We decided to take them out for a picnic. A magnificent site at the river bank of the mighty Brahmaputra was chosen as the place to enjoy and feel nature’s bounty. A local school lent their school bus. So we set off, all the 25 inmates and the entire staff to the spot on the early morning of 30th December2018. All the members of the trust and a large number of well wishers decided to join in with their families albeit by sharing the cost of the picnic. It was a day of rejoice, fun and frolics. The able bodied danced and played games like music and chair and hitting the pot blind folded. The others sat through, had the sumptuous lunch. It was a fun full day out, The routine of the inmates was broken in style.

My family has always been a great support system in my life. I stay with my family in Govandi. My father works in a tailoring shop. Although he didn’t earn much yet he was able to support me and my 3 siblings. He also managed to provide education to all of us. I, being the youngest one enjoyed all the pampering. My disability was not by birth but was caused due to the wrong injection given by a doctor for fever when I was just 6 months old. The injection caused an attack which led me going in to coma. I was kept in a clinic for about 21 days. After that, when I started recovering, it was observed that a nerve in my right leg is completely dried due to which I may not be able to walk. I was completely disabled by my right leg after that but the support from my family and friends helped me to face all hardships that came along all these years. I went through a surgery at the age of 13 in Mumbai and it was then I first joined NASEOH, on a relative’s advice, to get physiotherapy from the doctors here. For a year I came to the organization for the therapy. As the operation resulted in some progress I started using caliper for some time but as I found it difficult to use started using crutches later on. As travelling was quite difficult for me I decided to join NASEOH after completing my H.S.C as it was close to my house. Here, I was suggested to do a course in MS Office. After completing with good grades, “Certificate Course in Computer Operations with MS Office”, I applied to Eureka Forbes Call Center on the suggestion of NASEOH. I was selected for the job after an interview. Last month, I have completed my training and currently I am working there as a Customer Support Executive with a salary of INR 5500 which will increase up to INR 9500 after my certification. I am really grateful to NASEOH for providing me with the opportunity to stand on my own. 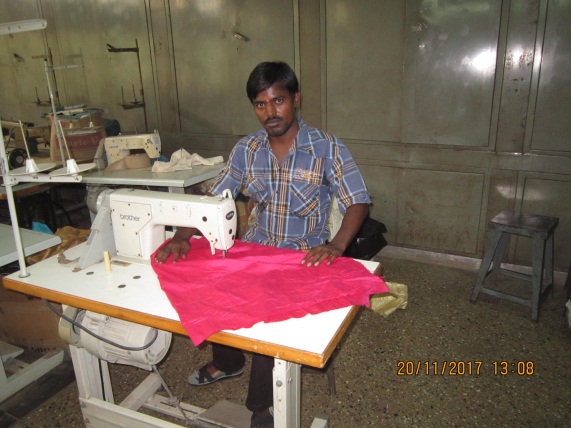 The provision of a tricycle to a person with Loco-motor disability opens to several possibilities for the person to improve his quality of life in all fields e.g. rehabilitation in the areas of education, training, medical support, employment and social activities.

In the last quarter we have distributed 10 tricycles to the needy disabled persons, out of the donations received through Give India, though we keep getting continuous requests for this support.

NASSEOH has been focusing to build capacities through the various vocational skill development program for the disabled persons. Employment and income generation options are the most important factors which help a person with disability in addressing his multiple issues and challenges.

In the last quarter the donors supported 6 persons for three months Vocational Training. We need more support to NASEOH in sustaining this core activity.

Mr. Vitthal Rathod, a 23 year old man self employed as a tailor, was born on 22nd October 1993 to a construction worker in Bidar, Karnataka. Both his parents worked as casual construction workers and later migrated to the city of Mumbai in search of work when Vitthal was 10 years old. Something very tragic happened to the family before they moved into the city for good. Vitthal survived an acute attack of poliomyelitis at the age of 3 years that affected his right leg leaving it entirely limp and functionless. Without support he would drag himself forward till he pushed himself hard to start walking without support when he turned 14. Being one of motor development stages, walking just comes naturally to us as a child but for him he had to teach himself. Vitthal had to devise his own strategy through self observation of some of his friends who had similar motor disabilities. He found his own way that helped him move forward in an upright position. This wasn't easy. He had to endure a lot of pain and as he grew older he became more conscious of his disability. When he had turned 10 years old his parents had decided to migrate to Mumbai due to lack of work as they sustained themselves on nominal wages they earned as casual construction workers. As construction work in urban spaces are driven by real estate there was better promise. Family settled itself in Mankhurd, a suburb in eastern Mumbai and has been living there for the last 14 years. Vitthal is the eldest child in the family with two younger brothers. One of them working as a construction worker like their parents and the other has dropped out of school after failing to clear his 10th standard exams. Parents no longer work and Vitthal alone supports the entire family with his earnings. He had studied till 10th standard in Shivam Vidya Mandir, a school in Mankhurd. Simultaneously he had tried acquiring tailoring skills from a man called Ajay who had a shop very close to Vitthal’s home. He did learn few techniques from Ajay but latter was hesitant to take him up as an apprentice hence learning was limited. Vitthal was told about NASEOH by a friend which prompted him to enroll himself for vocational training with the organisation. After assessment he was given mobility aid ( caliper ) that helped him in walking. Apart from this as his interest in tailoring came to the fore he was asked to take up training in NASEOH’s tailoring unit for 1 year. Nonetheless according to Vitthal he is now satisfactorily doing well for himself. He was provided with a sewing machine when he decided to leave NASEOH. This enabled him to set up a shop in his house. He charges Rs. 250 to 300 for a pair of pant and shirt and this gets upto an average earning of Rs. 5000 per month. For Vitthal he says it comfortably meets their basic needs and nature of work is such that it isn't too demanding on him with respect to time. However as tailoring is a sedentary job it does cause some stiffening of the lower back for which he has been advised to come to NASEOH to consult the Physiotherapists. Reflecting upon Vitthal’s story it reaffirms our believe in our principles, objective and goals of NASEOH that tirelessly dedicates itself towards creating a conducive environment for Persons with Disabilities, enabling them to achieve their maximum potential.

Your donation will support 1 Trainee

17 people are currently supporting this.