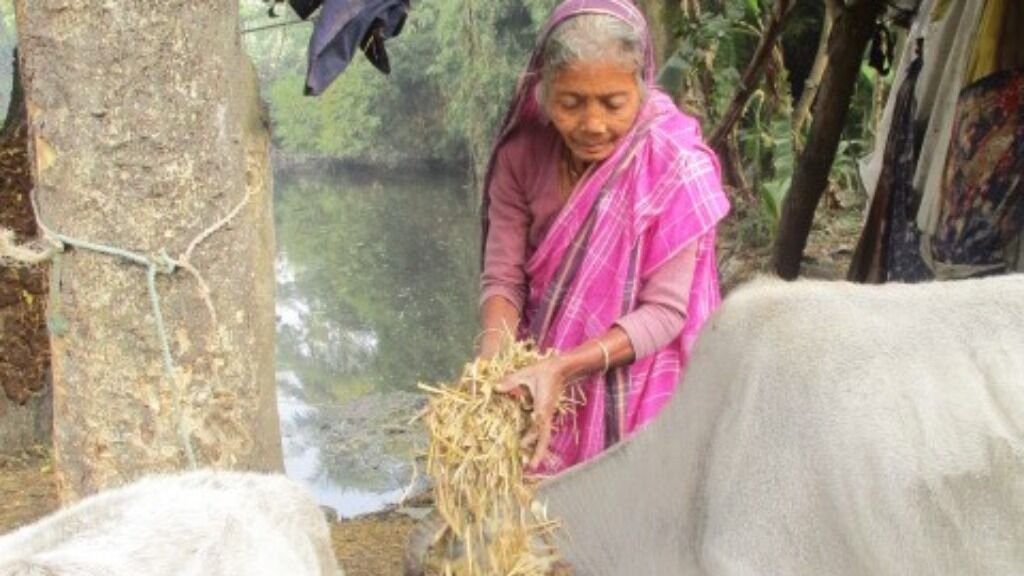 Amiya Mondal is 72 years old. She lived in Khordanahala, a small village in West Bengal. Amiya always had a very hard life. She has one son. Even with the minimum family income they had, she managed to raise her son and get him married.

As days passed by, she lost her husband to age-related illnesses.

She became frail and unable to work anymore. She was fully dependent on her son. However, her son who was not earning much began to consider her as a burden. Her son and daughter-in-law couldn't even provide her with two meals a day.

She was mistreated by her son and his family every day. She was humiliated and depressed but didn't know what to do. She resigned herself to a fate of hunger, and illness.

It was then that the team from Bani Mandir noticed her and enrolled her in the /Sponsor-a Grand Parent' program.

As a member of the program,** Amiya received food, clothing and health care support**.

Amiya, being a mother decided to share everything she received from Bani Mandir with her son and his family. Seeing this, her son realized his mistake and was sorry for the way he treated his mother. He promised to take better care of her in the future

Amina also received counseling at Bani Mandir to help her cope with her depression. She was motivated to live and assured that she would be taken care of.

Amiya now lives with self-respect. The help of monthly rations and medical help she receives does not make her feel like a burden to her family.

Today, she enjoys a normal dignified life that she deserves at her age.

Your help can make many more seniors like Amiya live their golden years with dignity. You can donate for the monthly rations and medicines the destitute elderly. You can give with confidence because every program listed is GIVEASSURED.

Bani Mandir runs a 'Sponsor-a Grand Parent' program to provide food and health support to the needy elderly in need.

One unit of donations to this program covers the cost of medical check-up and medicines including a hygiene kit, rations as well as administrative expenses for one senior citizen a month.

The staff and volunteers choose the beneficiaries based on surveys, with the help of the villagers and VDC based on the program's requirement and the village Panchayat's recommendation.

The first list of deserving elders was made in 2008, and this is regularly updated for new people while the people in the list continue to get support.

Every month, the beneficiaries come to the Bani Mandir office to collect their rations. If they are unable to due to fatigue or ill-health, the Bani Mandir staff delivers it to their doorstep.

Regular medical checkups at the camps in different villages are conducted for the members for preventive healthcare. They also have access to a doctor if required on non-camp days as well.

Medicines are provided by prescription.

The number of beneficiaries that receive support depends on the donations. All donations are usually utilized within 2 months due to a large number of recipients.

When you donate to this program, you help destitute elderly citizens with access to food and essential medicines in their golden years.

Happy to receive the grocery packages

Happy to receive the grocery packages 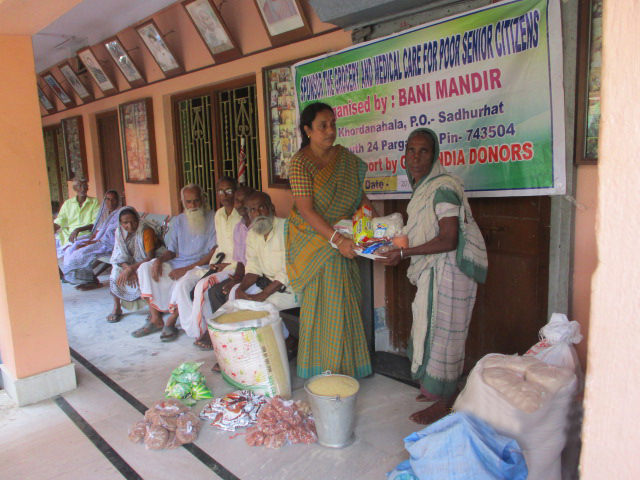 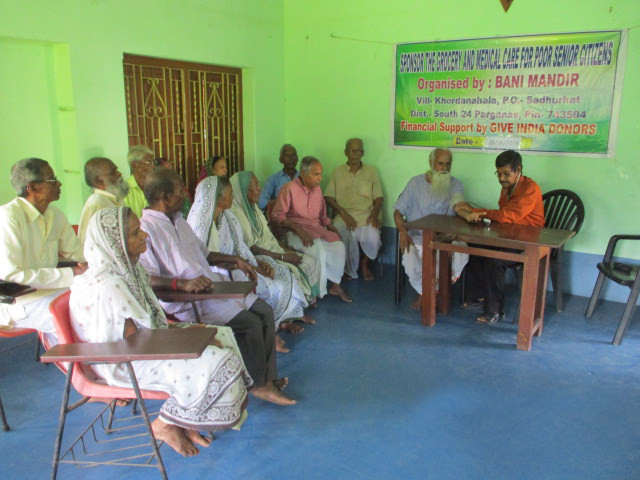 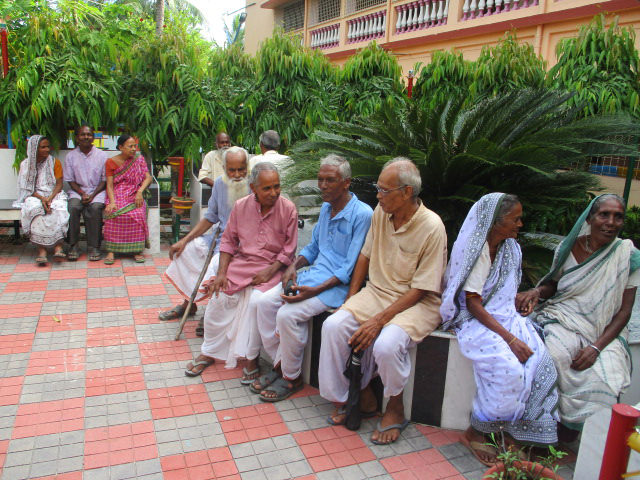 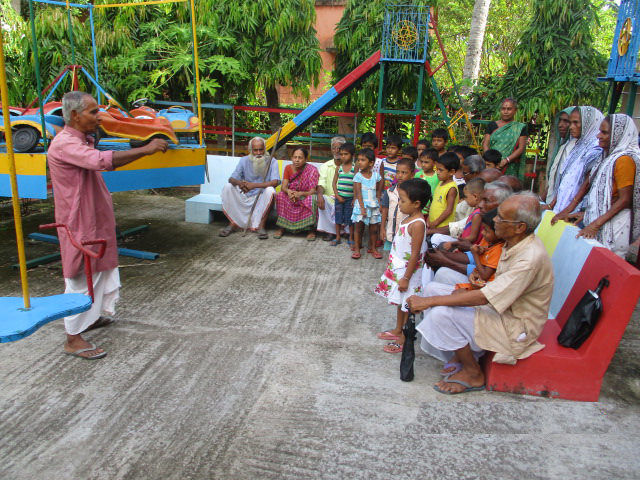 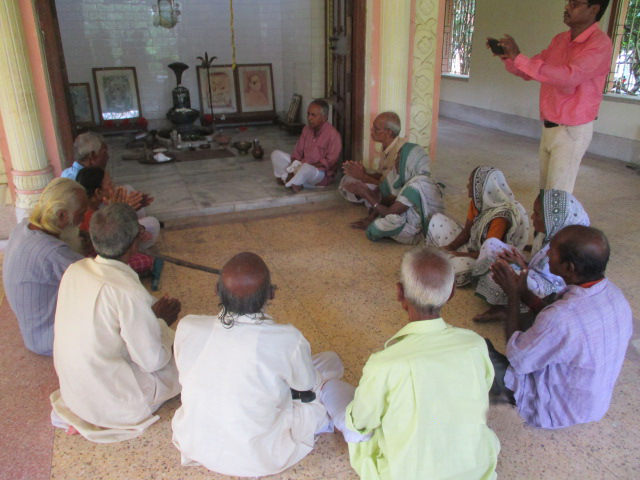 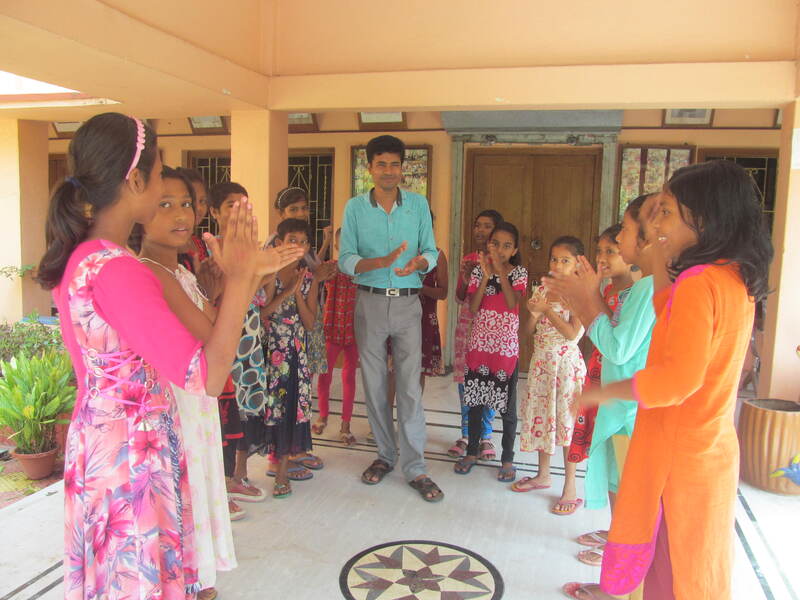 Under considering of the rural helpless and destitute senior citizens of our local villages in our operational area, our organization has come forward to stand by them for the development of senior citizens living under poverty. They are not only poor but also helpless. They badly need the grocery and medical care to rehabilitate in the main stream of the society.

To fulfil the noble mission, we have planned to help 300 such persons in our operational area. According to your sponsorship programme, we have selected 4 persons out of 300 through proper verification. Then a date is to be fixed and informed the beneficiaries and after taking all necessary papers with signatures, they are given according to your rules and norms. We have planned 300 such persons for the next quarter.

Palash Mondal son of Rohit Mondal of Village – Khordanahala, Post – Sadhurhat, District – South 24 Parganas, PIN – 743504, belongs to a poor and needy family living below poverty line. He lives with his parents and wife in 2-room semi pucca building roofing with tiles. His father’s monthly income from day labour was Rs. 1500/-. With small income he anyhow maintained his family and he had to spend days in great economic hardship. Palash was then seven year old. He had to face mal-nutrition and want of proper study. That time he got a golden chance as a sponsor child of SAHAY Child Sponsorship Programme in Bani Mandir in 1989. Getting food and nutrition he was able to move forward and carry on his education smoothly. Having completed his education, he got a job in Bani Mandir under Self-Help Group. Now he took different kinds of training alongwith drama training from SAHAY Child Sponsorship Programme. Now he carries on a workshop on drama taking sponsor boys and girls of Bani Mandir. Now he has able to stand erect on his feet and able to change his family status. Now his family members are living peacefully and smoothly. Now Palash is a self sufficient and contented person. It would not be possible if SAHAY Child Sponsorship Programme does not stand by him through Bani Mandir. Now he expresses his hearty thanks and profound gratitude to Sahay Child Sponsorship Programme and Bani Mandir.

Your donation will support 1 Elderly

22 people are currently supporting this.