Sponsor the expenses of an underprivileged visually impaired girl by Drishti 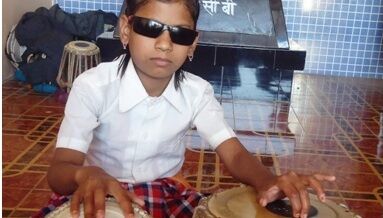 Reena Pal was visually impaired from birth. She lived with her family in the village of Barha of Kasara Tehsil of Satna district, Madhya Pradesh.

Her family belonged to an impoverished community. She had five siblings, four sisters, and one brother. Her family earned a very meager income and found it very hard to make ends meet.

They were not aware of Reena's unique needs. They didn't know about braille education, and because of the lack of awareness, she wasn't going to school.

A well-wisher counseled her parents about Drishti. They were convinced that this was the best option for Reena. So, they enrolled her in the Drishti Netraheen Balika Vidyalay.

The teachers in the Drishti Netraheen Balika Vidyalay discovered Reena's talent in singing. She had a god-gifted voice. The teachers worked with her to train her professionally. She also showed aptitude in mastering musical instruments.

She is just in class 5 but is extremely talented in both singing and playing the Tabla. She looks forward to learning western musical instruments as well. She practices her music every day under the guidance of her music teacher.

She aspires to grow as a musician. She has won many medals and praise on Louis Braille Jayanti, which is an all India competition held by Drishti since from 2009.

**Without the guidance of Drishti's teachers Reena's life would have been spent without education and a future. The care and training she is receiving will help Reena achieve her dreams.

You can also help poor visually impaired children like Reena move from their dark future into independence. You can donate so that they can get the support which can make them independent. You can give with confidence because every program listed is GIVEASSURED.

Drishti Netraheen Balika Vidyalay is a residential school for visually impaired girls. The school aims to provide them with a holistic education so they can be trained in many skills to help them be independent.

One unit of donation to this program will cover the cost of food, music trainers, and teaching staff for one visually impaired student for a month.

Drishti was established in 1995 for educating visually challenged girls in the town of Karwi at the district of Chitrakoot, Uttar Pradesh. Chitrakoot district is an economically backward area in Uttar Pradesh.

There were no schools for visually challenged girls in the town of Karwi till Drishti started operating this program.

12 full-time teachers impart the best possible education. The students use Braille books, Braille slates, and kit for reading and writing. The girls are also trained in music which helps in recognizing their talent in singing.

Exposure visits and workshops are conducted for the development of the visually challenged girls.

All the residential students are provided with food free of cost. Healthy, nutritious, and hygienic food is cooked in Drishti's kitchen.

When you donate to the program, you will help in the holistic education of a poor blind girl whose journey you can follow.

Shankar Lal Gupta is the head and founder of the organisation. He himself is a visually impaired person, and has very good experience in the social sector. He has inspired many with his determination and perseverance in starting and running an organisation.

No. of blind girls being provided with higher education: 25

No. of blind students being provided with Computer Traininig: 58

No. of blind students provided with Home Management : 6

No. of blind girls being provided with Primary education: 79

No. of blind students being provided with vocational training: 58

The mission of the organisation is to make visually impaired girls self-reliant by providing awareness, education, training and skill development. 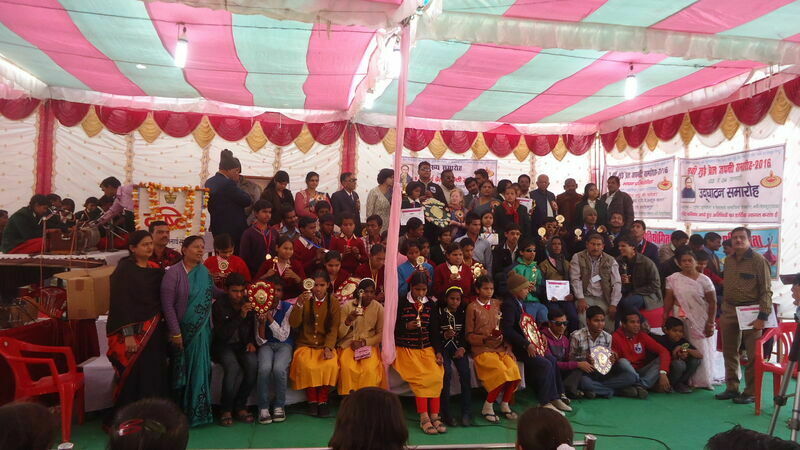 Due to Covid-19 pandemic, schools were remained closed from July till September. As a result, students continued learning through online classes. This was the first time these visually impaired girls experienced education through online mode at their home which proved to be an adventurous journey for them. Students attended Independence Day program by sitting at their home in which they participated in many cultural programs such as national songs and freedom struggle stories, paying tribute to our freedom fighters. From October month, Students of class 9th to 12th started coming to school and their classroom education started. 15th October witnessed Drishti's 25th Foundation Day in which students again participated in singing and speech programs with full enthusiasm. Children's Day was celebrated on 14th November in which many sports events were organised among students and prizes were distributed to the winners. Drishti keeps organizing many programs from time to time to inculcate all types of new talents and sills in these visually impaired girls in which these students participate in large numbers. Along with the academic knowledge, Organization also strives to give Computer training and vocational training to these students. Many workshops are also organized in which they perform as per their area of interest and talent. On the occasion of International Braille day organized on 3-4 January, this year many students participated in Drawing competition, in which they filled colors in the tactile (raised by dots) drawing through touching it with their fingers. This was very new experience for all of them. Along with this, many students participated in the speech competitions in which they conveyed their thoughts with open heart about What are their aims and desires in life. Also, they were given opportunity to discuss on the contemporary topics. Here at Drishti, students fell very happy and they regularly strive for achieving new heights.

Way to a bright future

Way to a bright future 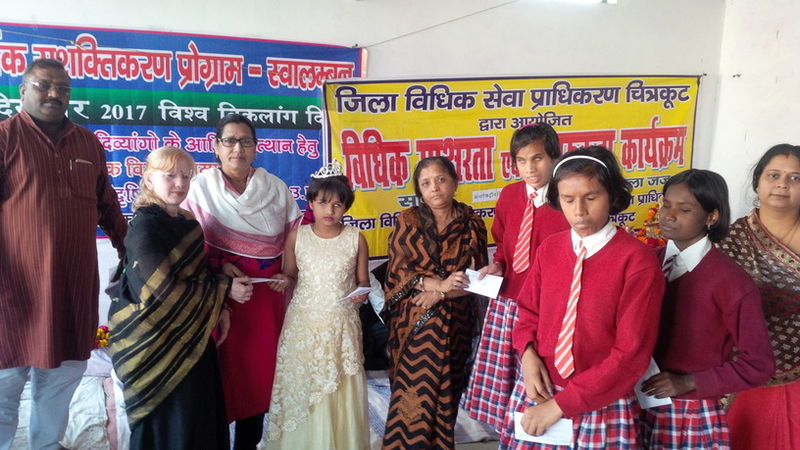 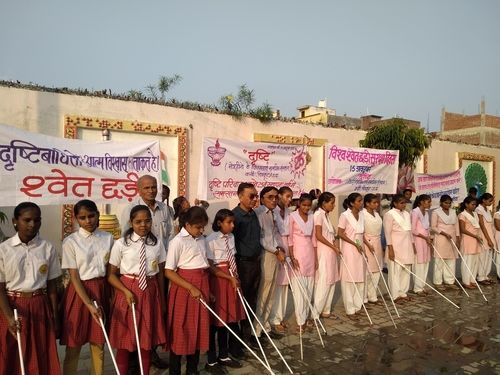 On October 2nd, on the occasion of Gandhi Jayanthi, several competitions were held where many schools participated, Drishti was also among those. The children won numerous awards and we were immensely proud of their achievements. On October 15th,the institution celebrated the Foundation day and World white stick day with great pomp and joy. On this day all the students had to participate in a rally. They also had to make people aware of visual impairment, what it is like and how one can help and support this cause better. We celebrated Sardar Patel's birth anniversary on October 31st with great pomp and joy. We conducted programs where inspirational stories from his life were spoken about and shared with students. This month we also celebrated Deepavali. Many children celebrated the occasion at their homes. For the ones who could not go home, they celebrated with us in the institution. Children were served with special meals and the entire complex was decorated and lit up. In the month of December, we conducted the half-yearly examinations for all the children. We also encouraged participation in many competitions conducted nationally, like – General knowledge quiz, solo and group music, fancy dress and dance competitions. We also celebrated the Republic day on January 26th with children singing, playing musical instruments and many other programs and activities. In March, we conducted the annual examinations and also celebrated Holi with bright colors. All the children are extremely happy here and enjoy while also benefitting from all the facilities provided.

Educate a visually impaired child by Indian Association for the Blind