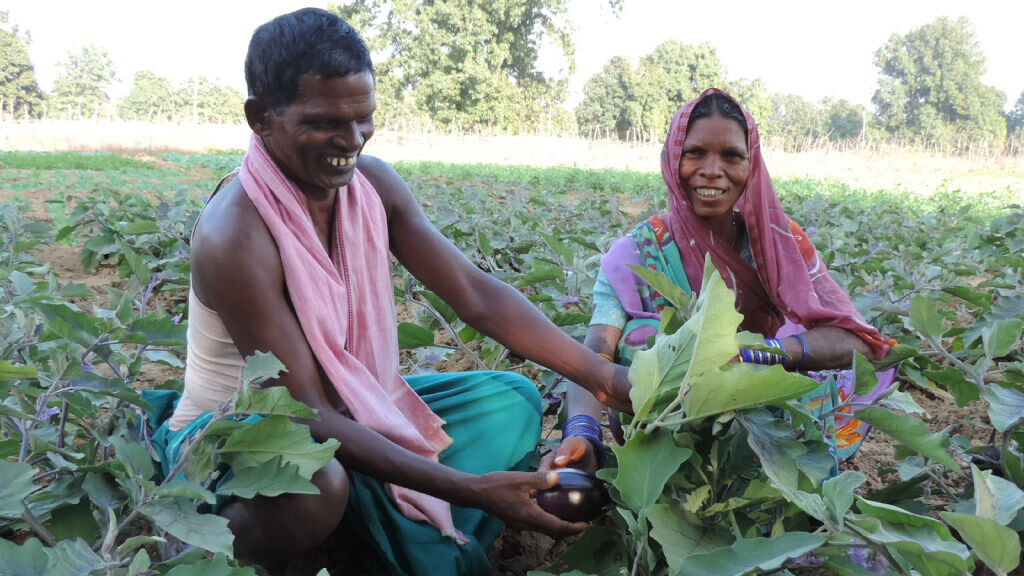 Appeal Manjhi family goes from being debt-ridden to making Rs.76,000/- in a year!

Appeal Manjhi is 52 years old. He belongs to the Manjhi tribe and lives with his family in a little village called Puri.

Puri is a small village in Raigarh, Chhattisgarh. The Manjhi tribe depends on the forest for their livelihood. The area is rich in non timber forest produce. Appeal family used to work in the forest. But most of their produce went to a few businessmen at a nearby town called Kudumkela.

This was the reality for most of the Manjhi tribals in Puri. The businessmen in Kudumkela provided cash, clothes, and other requirements on loans. The loans were repaid with forest produce.

This led to the family living hand to mouth. They longed to live without having to worry about their next meal. Their problems became worse when Appeal son, Rajnikant got addicted to alcohol.

It was during this time that Janmitram started the agriculture development program in their village. They worked to make better use of the degraded and waste land by developing horticulture and vegetable promotion.

Appeal wanted to take their help and develop his land. However, the program failed as villagers were unwilling to cooperate with Janmitram.

But Appeal vowed to change this with help from Janmitram. He planted fruits and vegetables on whichever parts of the land he could. In the first year, the produce was not good. Puri was a place where open grazing was common which affected his crops.

His son Rajinikanth also squandered the minimal earnings they received on alcohol.

In spite of all this, nothing could derail Appeal from the path he chose.

With the support of Janmitram, he brought up the issues he faced with open grazing in the panchayat. He erected a fence around his land. *Janmitram helped Appeal choose crops that improved soil such as sunflower, pea and cauliflower. He erected a hut in the field and kept around the clock vigil. He then helped his son stop his alcohol habit with constant motivation and got him to work on the farm with him. *

All the hard work paid off and that season he sold a whopping Rs. 76,000 worth of vegetables.

His farm inspired those around him. In the next season, many other residents of Puri replicated Appeal farm. Most of them enrolled in the Janmitram program and succeeded in earning well.

Over time, more and more villagers began to shift to agriculture until the old system was completely done away. In 2016, the whole village produced 26 tons of onion alone!

f you do good, things will turn good for you,says Appeal, with a toothy grin.

Appeal Manjhi appeal in Puri is now unanimous. He is however, most proud of his son Rajinikanth who left alcohol and turned into a passionate farmer.

Your help can transform many more villages like those of Puri. You can donate so that the poor farmers can get resources to start farming and get out of the cycle of debt. You can give with confidence because every program listed is GIVEASSURED.

Janmitram runs the wadi program with the objective to optimize use of the degraded/waste land by integrated horticulture development and vegetable promotion in tribal areas.

A survey is conducted in the villages and farmers are selected based on prevalent tribes.

The list of beneficiaries is then drawn up. Janmitram works with National Bank for Agriculture and Rural Development (NABARD) for funding and support for the wadi programme.

The resource material and capacity building is done by Janmitram with the support of NABARD. The tending of farms is done by the farmers. They sell the fruits and vegetables produced through the federation and benefit from selling their produce at good prices

Janmitram also provides support in marketing and linkage of their crops.

Donations to this program support the cost of vegetable seeds, cow-dung fertilizer, and pesticide applications for the farms.

When you donate to this program, you help a farmer become self reliant.

Janmitram' translates to ""Friends of People and that is exactly what the organisation, Janmitram Kalyan Samiti has been for the tribal people in remote Chhattisgarh. The organisation was established in October 2002. Since then it has been working with the government and community towards development.

Janmitram Kalyan Samiti was started by a group of youth with a common aim to fulfil their desire of serving the society.

The founders of the organisation have had an academic and professional background in forestry. Therefore the organisation naturally started working in forest-related programmes in tribal and rural areas. Janmitram initially worked for livelihood enhancement and natural resource management. Health and skill development programmes were added in due course of time.

The mission of the organisation is to intervene, among backward and disadvantaged communities, by raising awareness and skill, to make them able to recognize better opportunities, offered by our nation.

Dr. Mukesh Giri Goswami is instrumental in the inception and growth of the organisation. Dr. Goswami is a specialist in natural resource management including soil, water and forest conservation. In his words, ""Make footprints in hearts to be remembered rather than leaving carbon footprints on the heart of the mother Earth"".

The organisation has a varied range of activities, from making farm ponds, to vegetable garden cultivation, setting pumps and deepening wells as well as creating awareness among female sex workers.

They have also received a number of rewards recently, including the Best NGO by the Women and Child Department, Raigarh under Beti Bachao-Beti Padhao scheme. 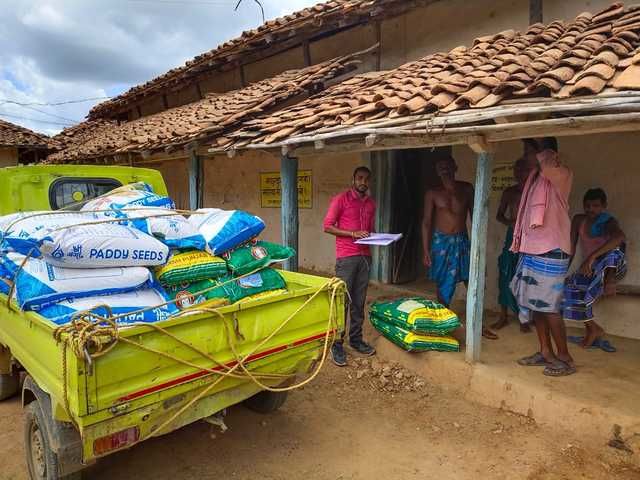 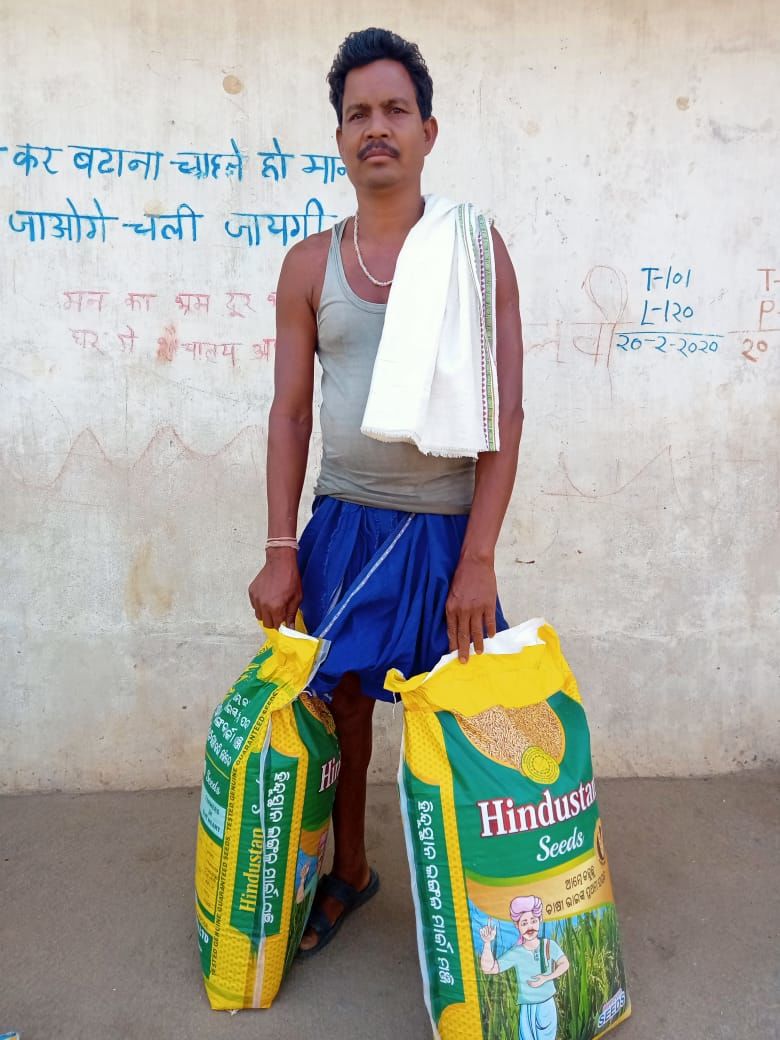 Janmitram runs the wadi program with the objective to optimize use of the degraded/waste land by integrated horticulture development and vegetable promotion in tribal areas. Tribals have small land holdings, less-productive lands. Many of our beneficiaries have developed wastelands into paddy field through help of MGNREGA scheme of GOI. Such lands are initially less fertile. This programme helps to get certified seeds of improved verity. This helps farmer to take-up and try new varities giving better yield and better price. Which in turn helps in per acre income improvement up to 12-14K in a crop cycle which is almost 1.5 times better then earlier. In last quarter, we delivered this help to 11 farmers in village piyayidraha, Bulekera and Pordi of Ghaghoda block in Raigarh district of Chattisgarh.

Your donation will support 1 Garden