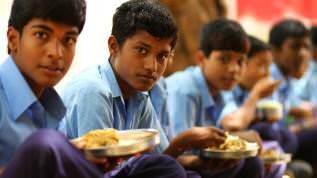 Give a warm meal to a poor child like Kishan today.

Kishan is a 12-year-old boy from a small village called Baran in Rajasthan. His family belongs to the Saharia community, one of the most primitive tribes of India. The community is extremely poor and suffers from illiteracy and hunger.

Kishan’s father is a farmer and the only earning member of their family of six. They never had enough money to provide food for everyone. Kishan did not get proper nutrition and had no energy during the day.

Although his parents sent Kishan to school, they did not care too much about his education. He was not interested in studies and had trouble concentrating in class.

When The Akshaya Patra foundation began to work with his school, Kishan started getting fresh and tasty meals every day. This got him excited to come to school. Eating a nutritious meal for lunch every day also gave him the strength and energy he needed. He is now able to concentrate and take part in class as he is not hungry or sleepy anymore.

Kishan’s progress has motivated his parents to send their other children to school. They now have faith that their children will get the nutrition and education they need to sustain themselves while they try to move forward in life.

Your contribution will bring a warm meal to poor children who have no other source of nutrition. Contribute to help more children like Kishan get the food they need to learn and grow. You can give with confidence because every program on our platform is GIVEASSURED.

The Akshaya Patra Foundation helps underprivileged children by providing them with a healthy meal. The surest way to break this cycle of poverty is through education. Education can improve the quality of life of a family for future generations.

When the basic needs of a child are not met, education often becomes the last priority. At times like that, a mid-day meal is an incentive for them to continue their education and reduces dropout rate.

The food is cooked in centralized kitchens and the program is implemented across schools in partnership with the government of India. Close to 1.5 million children in 10 states are provided with mid-day meals through this program.

Donate to this program and you will support one child in a school in a government school in Rajasthan get access to a meal. This may be the only good meal they eat in a day and will help resume their education. 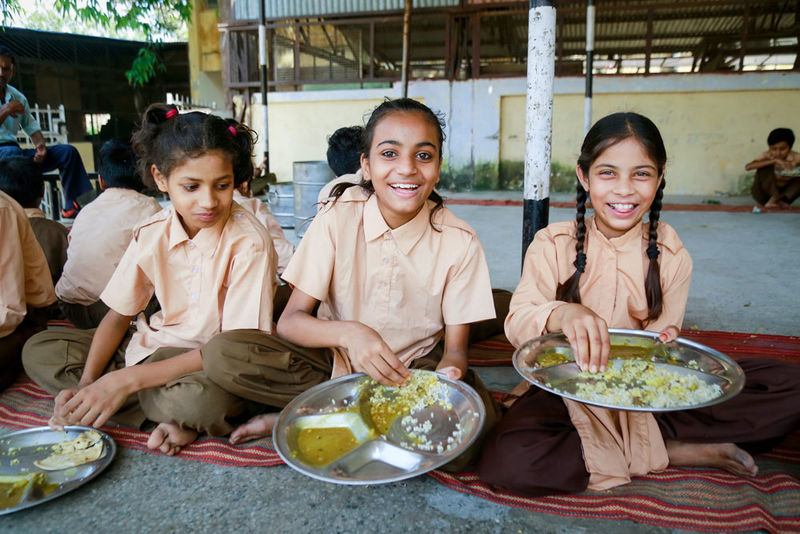 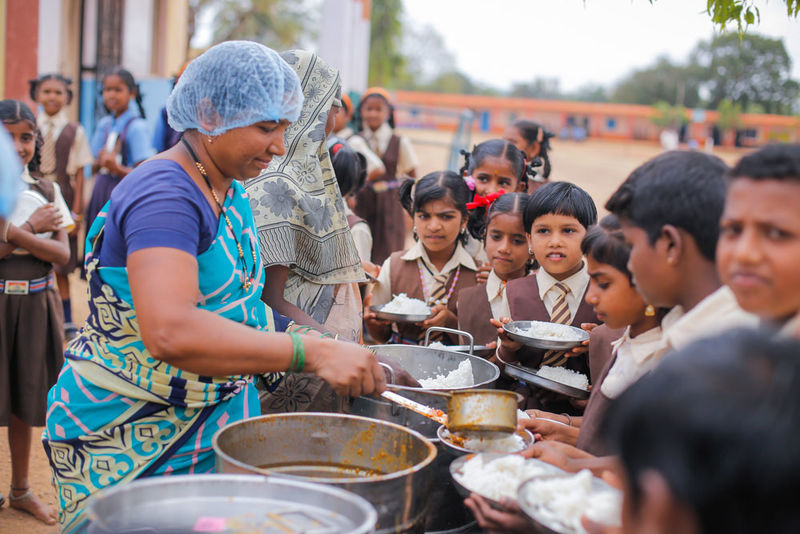 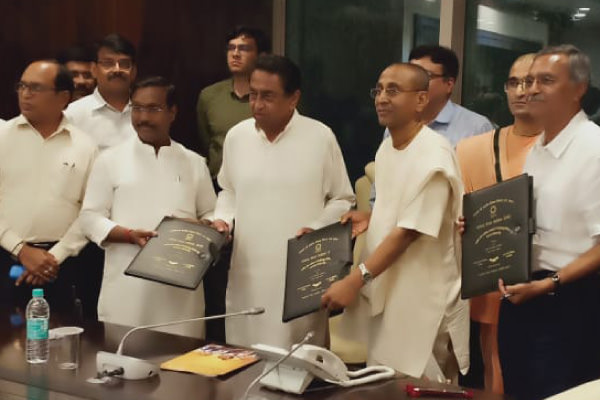 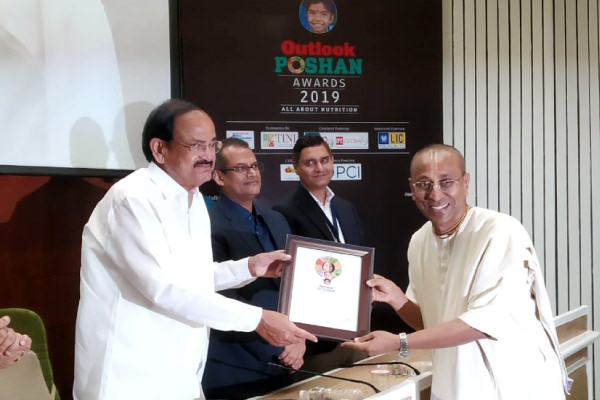 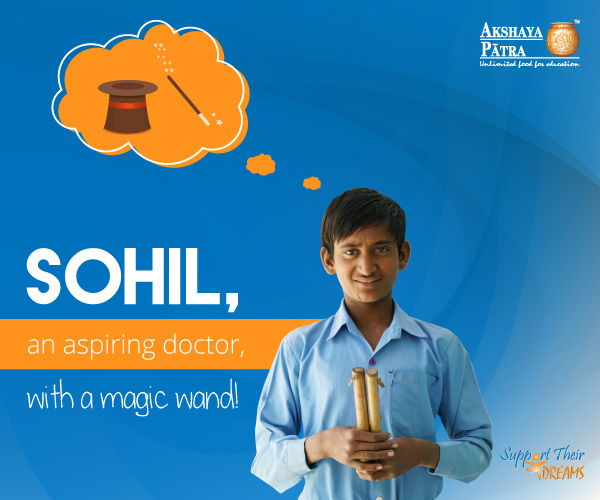 Akshaya Patra reaches out to 1,762,133 children in 42 locations across 12 states of India, providing them with freshly cooked meal on all school days. Currently, we implement the mid-day meal programme in 15,024 schools of the country, with plans to increase that number to hundreds more.
The Akshaya Patra Foundation has been chosen as the BBC World Service’s Global Food Champion 2019.
Shri Chanchalapathi Dasa, Hon’ble Vice-Chairman of Akshaya Patra, received the award at a ceremony held in Bristol City Council, United Kingdom. The CEO of Akshaya Patra UK, Mr Bhawani Shekhawat also attended the award ceremony.
This was the third edition of Global Food Champion, an annual award that honours people or causes that help societies and inspire lives. In 2018, a very talented chef and caring humanitarian, Mr Jose Andres – the man who helped provide 3.4 million meals to people in Puerto Rico in the aftermath of Hurricane Maria – won the award.

Madari Basti in Sanganer, Jaipur, has become synonymous with street magic. It is the bread and butter for most people residing there. Almost every household has one street magician to its credit. Some of them are veterans who can make a rubber snake come to life and dead pigeons fly, while others are amateurs who are learning the tricks of trade. For these budding street magicians, the first task is to learn the trick of making coins vanish in thin air and reappear in someone’s pockets or behind someone’s ears. One such upcoming entertainer is 12-year-old Sohil Khan. Sohil, a Std IV student in the Government Upper Primary School in Pratapnagar, Jaipur, is among the many children for whom school is a silver lining. Street magic has long been a form of art which has been passed on from one generation to the next. Of late, however, it has lost its sheen. Even the veterans of the trade want their children to get a proper job instead of walking the path of struggle that they have endured all this while. After Sohil’s mother passed away, his father, Umad Khan, married Jafran. He has three sons with his first wife: Sohil, Ronit, and Taufiq, and three with his second wife, Mohit, Tauheed, and Shoaib. Sohil and his younger brothers, Ronit and Taufiq live with their grandmother, a few blocks away. Both of them are in Std III in the same school as Sohil. His stepbrothers, in contrast, are too young to attend school. 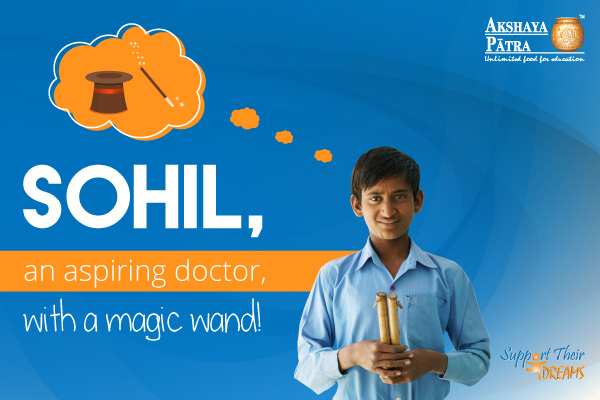 Sohil is a Std IV student in the Government Upper Primary School in Pratapnagar, Jaipur. After Sohil's mother passed away, his father, Umad Khan, married Jafran. He has three sons with his first wife, and three with his second wife. Sohil and his younger brothers, Ronit and Taufiq live with their grandmother, a few blocks away. Both his brothers are in Std III in the same school as Sohil. His stepbrothers are too young to attend school.

"My grandfather taught magic to my father. He in turn taught it to me. I don't really like it, but I don't hate it either". Young Sohil aspires to become a doctor. He likes studying, Mathematics and English are his favourite subjects.

His intention is to earn good money and get his grandmother and his entire family out of the throes of poverty. "We have a small house, which is not in good shape. I want to renovate it and maybe add another floor, so that all of us can live together," he says. Sohil goes out on holidays to perform street magic in different parts of Jaipur and during vacations, he even goes to other locations with the elder boys in the neighbourhood and works as a jamura (assistant). Like other children, even Sohil likes to play with his friends. The idea of banter with friends brings about a smile on his face. Then there are days when, instead of stepping out to play, he has to step out to support the family. On a good day, he earns Rs 50-100, but on most days, it's around Rs 10-20. Sohil has fond memories of the time he spent with his father.

"We just taught them these tricks so that they can earn for themselves if need be, but I would prefer if they work hard and get a proper job instead of depending on Rs 40-50 that they earn from performing on the streets," says Sohil's grandmother. According to her, street magic had no future.

Sohil's family lives in such difficult conditions, so it isn't surprising that he likes the variety of food that is served at school. "My favourite is Dal Chawal, but we also get Roti, Halwa, Kheer, Rabdi and even biscuits and bananas at times." Even his grandmother is thankful that the three of them get one good meal in school.

Support the treatment of a baby at risk by EKAM Foundation