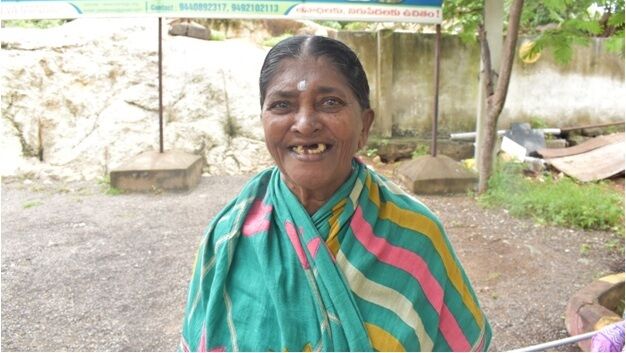 Life had deal Lakshmi a hard hand. She was widowed at a very young age. She raised her son by working as a maid in several houses. She earned very little and struggled hard to raise her son.

When he grew up, she found him a wife. She had a hope that he would start earning and she could finally rest.

He went to Mumbai to find work. However, he never came back. She lodged a missing complaint in Mumbai. The family never found out if he went missing or abandoned them.

With her son missing, her troubles increased. She was over 70 years old but went back to working as a maid in homes. She was very weak, but she used to go to work to earn a square meal for herself and her unemployed daughter-in-law. Her daughter-in-law began torturing her regularly. She would verbally and physically abuse her. Lakshmi Bai became depressed and fell ill frequently because of age and abuse.

At last the neighbors took pity on Lakshmi. They decided to rescue her from her torture at the hands of her daughter-in-law. An elderly neighbor having heard of Priyadarshini Seva Mandal called the organization. He informed them about the sad plight of Lakshmi Bai.** Lady Volunteers from Priyadarshini Seva Mandal reached the area where Lakshmi stayed. They and brought her to the home.**

Within a short time, Lakshmi recovered from her depression. She now lives a peaceful life with no need to work.

Priyadarshini Seva Mandali runs a Home called NEST for the abandoned elderly senior citizens. Their kin abandons them or deserted by their children because of poverty or serious illnesses.

Lakshmi finally a place she could call home at the NEST. The residents at NEST are now her family. They share their joys, sorrows and all their experiences in their lives.

Without the support and care of Priyadarshini Seva Mandali, Lakshmi would have spent her old age going through abuse. The home has given her a new life and hope in her golden years.

You can also help poor destitute seniors get a safe shelter and medical care that they deserve. You can donate so that they can get the support with which they can live their golden years in peace. You can give with confidence because every program listed is GIVEASSURED.

Priyadarshini Seva Mandali runs a NEST, a home for the destitute, homeless senior citizens who have been abandoned by their families. This was started in 2012.

One unit of donation to this program covers the medical expenses, the salary of the caretaker and cleaning staff as well as rent of the home and admin expenses for one person for a month

The residents are well cared for by the staff. They are provided with free accommodation, medical expenses, and food. While most of them are too old to take on regular work, some of them keep themselves busy by making cotton wicks and paper covers.

These senior citizens are provided with breakfast, lunch, and dinner. An in-house doctor and medical facilities take care of the healthcare requirements.

The home can accommodate 20 -25 residents. The minimum age of senior citizens living in the center is 60.

When you donate to the program, you will help abandoned senior citizens get access to three meals in their golden years.

Priyadarshini Seva Mandali (PSM) commenced its journey on 27th April, 1991 with the aim to provide a platform for the unprivileged ones. The organisation is registered under A.P Fasli Telangana Society registration Act 1350 F.

The organisation currently works with the grassroot level of the society in order to bring them back to the mainstream of life. They work in 5 revenue mandals in Khammam district, with headquarters in Khammam.

Initially they started with a small group of people. However, with time, several like minded people joined them and became a wonderful part of their journey, contributing precious time in shaping the dream of a beautiful nation. They are focused on facilitating community organization and women empowerment that leads to sustainable development of the society.

R Venkatamma Going Strong at 75! Thanks to NEST HOME of PSM! 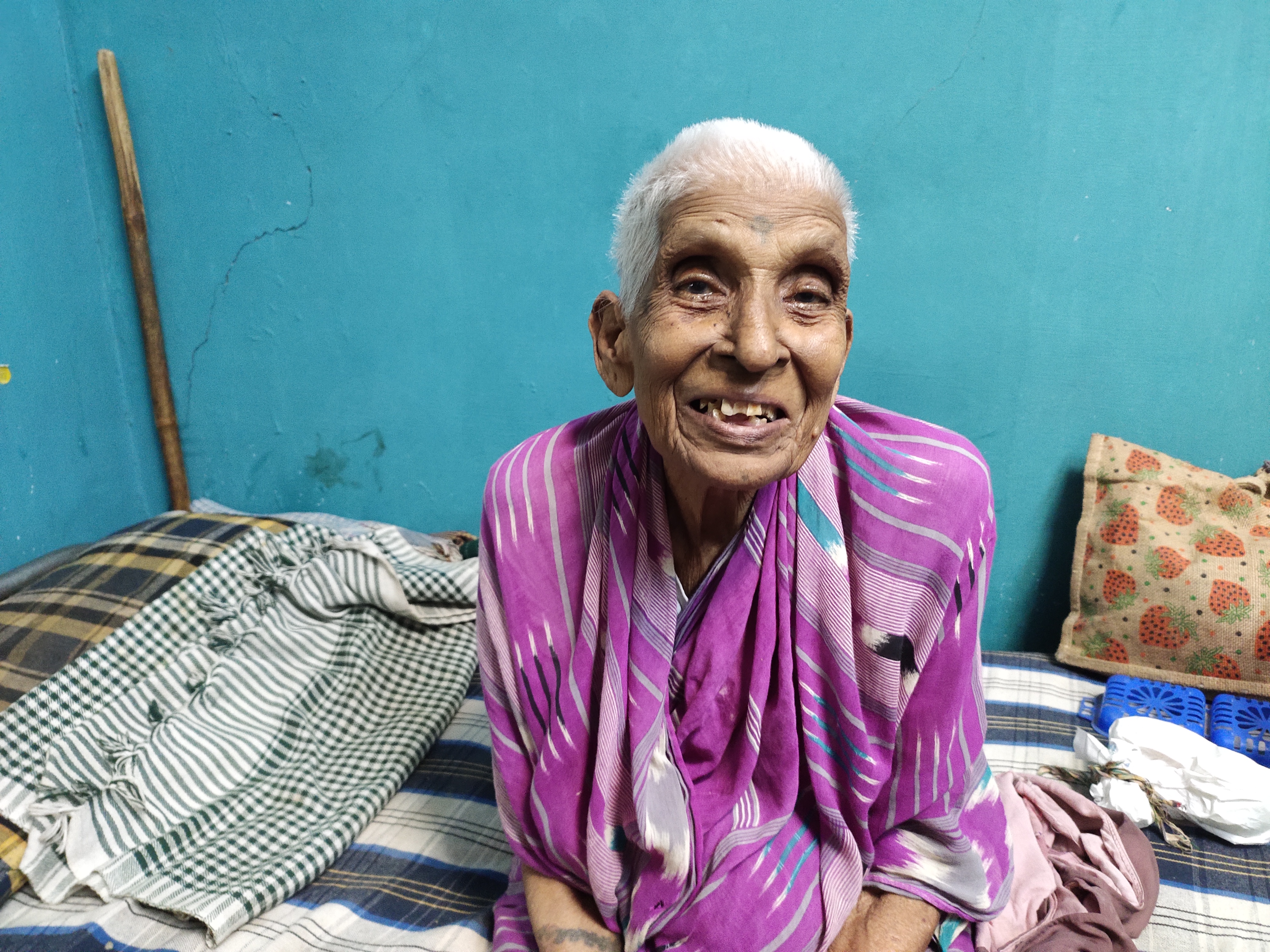 Thanks to your support, we have been moving forward with much enthusiasm in our bid to provide secured shelter to abandoned senior citizens, enabling them to lead a qualitative life in our NEST HOME. We conduct regular checkups on our beneficiaries given the dreaded COVID situation and take care of them by providing medicines and a healthy diet. We also ensure that they regularly exercise and do yoga and meditation to stay fit and healthy. We monitor all our inmates to keep them happy, hale and hearty. We have kept the dreaded COVID at bay... miles away from our PSM and NEST HOME. Celebration of festivals like Sankranthi, Holi, Ramzan is what our inmates enjoy the most. They help in preparing sweets. We have extended our programs to cities and districts in Telangana and Andhra Pradesh with much success despite facing a financial crunch. 90 people benefitted from our program. They are all doing well health-wise and are living happily. Through our program, we could help them maintain their health in good condition.

There were no particular challenges in carrying out our operations. Covid was at bay with due care, medication and yogic exercises. We would love to continue in the same spirit and vein for years to come. It is our mission and goal to provide quality life to abandoned senior citizens.

Stories from the ground:R. Venkatamma, who is 75 years old, hails from a very poor family. Soon after her husband died, her only daughter began to ill-treat her and tortured her. Poor Venkatamma, whatever she earned through working as a maid at few homes was taken away by her drunkard daughter. When she became old and could not earn, her daughter drove her away from home. She has no one to take care of her. Someone took pity on her and got her admitted to our NEST HOME. She soon gained her health under our due care. We provided good food, regular checkups and made her do yoga, meditation and walking. She is now healthy but has age-related weaknesses. We are grateful for your support.

Now, Susila has a family 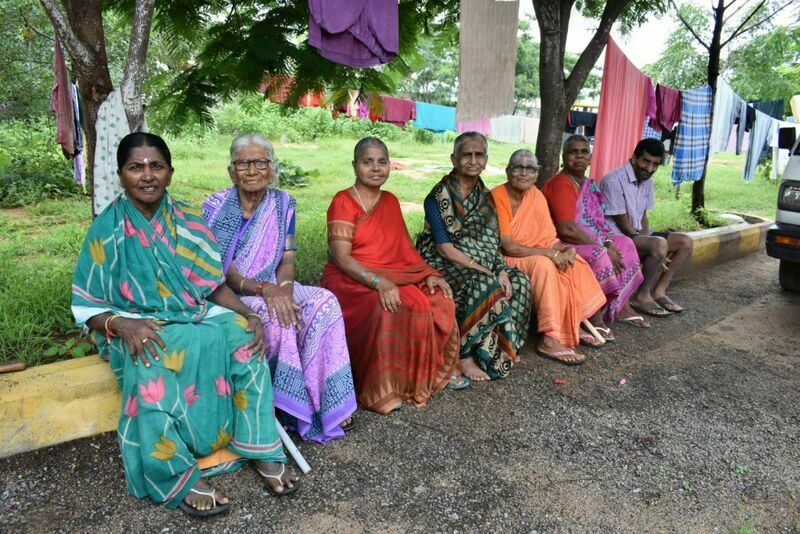 Besides providing good quality life to the inmates of our NEST Home, providing medical attention is a basic principle and a necessity at our Priyadarshini Seva Mandali. In fact, without good health whatever wealth we have is all waste and useless, which is why we provide importance to good health. We place utmost importance on medical care and stress on good healthy life for all of our inmates. Under this medical program, we regularly conduct health check-ups on all our inmates. General Doctors and Specialists regularly visit our NEST Home to check the health condition of our inmates. Following due medical care under our doctors' advice, we at NEST provide good medical care, provide medicines, allow them total bed rest and ensure our inmates follow the strict dietary regimen as prescribed by our doctors. Apart from medical care, we ensure that these old-age people at NEST take care of their health through yoga, exercises, walking, jogging and meditation etc. This way, we provide good health to all our old-age people residing at our NEST HOME ensuring they live a happy healthy life

M. Susila, aged 60 years was abandoned by her children, kith and kin. After her husband died, her two daughters and sons-in-law took away whatever little property and savings she had. They gradually began neglecting her, not feeding her properly. They made her go hungry. They used to give Susila the stale and leftover food. The daughters made her work like a donkey in their homes. They treated her like a slave. Susila suffered all this in silence. When she fell ill, they could not even provided her medical care or purchased a tablet. Unable to bear the torture, she one day ran away from her family and went to live with her relatives. For a couple of days, they looked after her very well. Soon there too, the torture began. She was half-fed and worked like a slave there too. She was finally fed up and ran away from her relatives place too. She roamed the streets and lived by begging. She slept on roads and footpaths. There was no one to look after her. When she fell ill and was unable to even get up and walk, a kind gentleman, after knowing our noble charitable activities and how we take care of abandoned destitute old-age people informed us about her condition. We then brought her to our NEST HOME. When we took her for medical check-ups, she was found to be having diabetes and heart problems. We provided her good medical care and nursed her back to good health. She soon regained her health under our due care and love. She participates in all the activities happily like a little child.

Medical check-up to the inmates of old age home 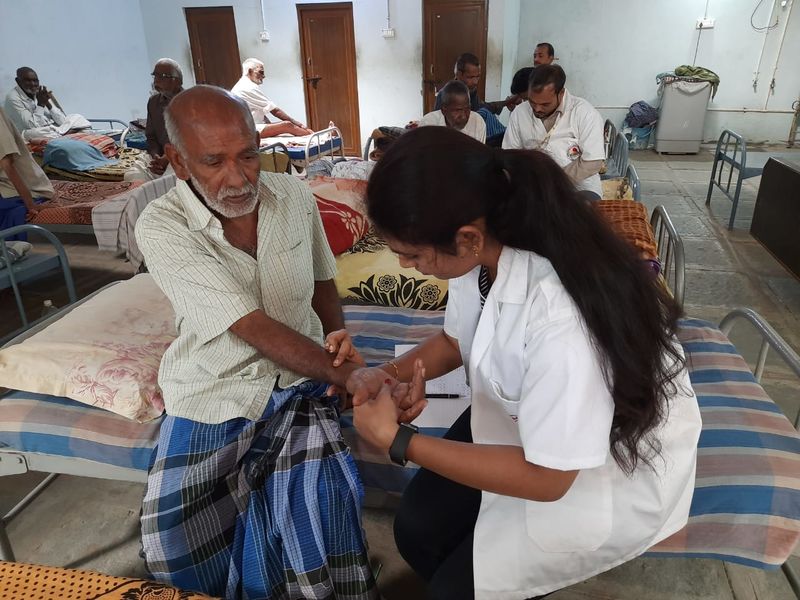 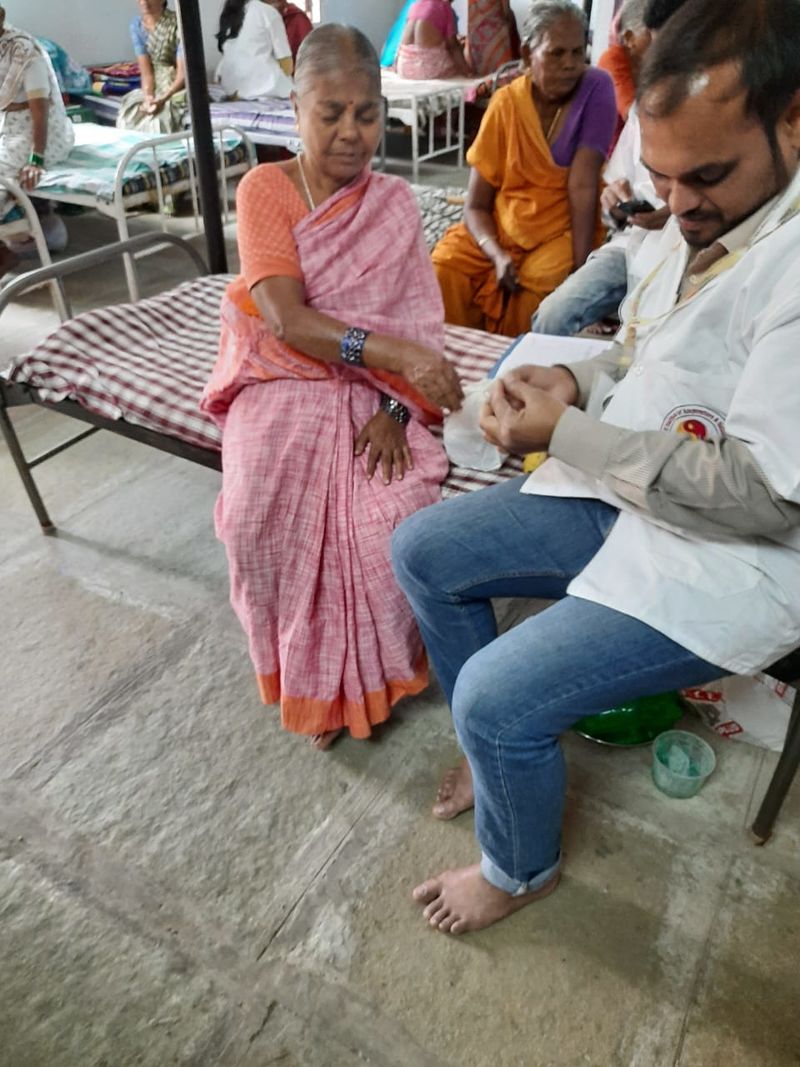 Medical check-up to the inmates of old age home

The inmates of the will undergo regular medical checkups with B.P, Diabetes and general check up which is very useful for us and this time we tried a Acupuncture treatment for the inmates of old age which really works and many of them felt better from their knee pains and other body pains. 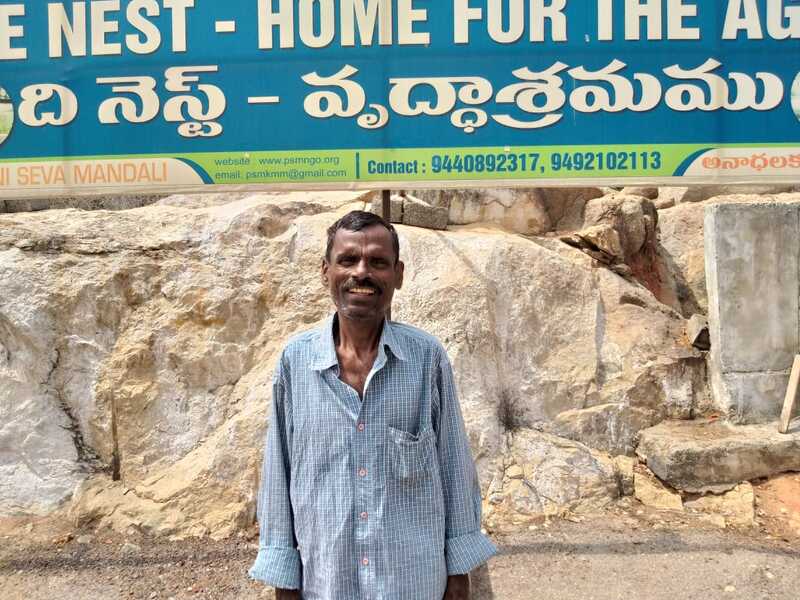 Besides providing good quality life to the inmates of our NEST Home, providing medical attention is also the integral part of our Priyadarshini Seva Mandali's Preamble. We place utmost importance on medical care and stress on good healthy life for all. Under this medical program, General Doctors and Specialists regularly visit our NEST Home to check the medical condition of our inmates. Under their guidance, PSM provides good medical care including medicines, bed rest, and prescribed dietary food. Besides, providing medical attention and care, we also ensure that these senior inmates at NEST take care of their health through yoga, exercises, walking, jogging and meditation etc. Thus, we ensure that all the senior inmates live a healthy happy life ever after.

Janardhan was once an orphan was abandoned by his own daughters after he performed their marriages. He was left penniless after spending everything on his daughters' marriages. The mental torture he suffered at the hands of his own daughters and sons-in-law left him in a depressed state, which gradually turned him into a mentally deranged man. Soon his daughters and sons-in-law kicked him out leaving him orphaned. Besides his mental condition, his physical condition too worsened due to lack of food and proper medical care. There was no one to take care of him. No medical attention. He hardly ever got a full meal in a day. He used to go without food for days together. Under this condition, someone told him about our Priyadarshini Seva Mandali and our NEST Home and the good jolly life at NEST. Having found our address, he straightaway walked into our office and joined as an inmate. Under our care, over a period of time he picked up his health condition and became physically fit. As for his mental condition too, through meditation and proper medical attention he became mentally fit too. He was, along with other inmates, enjoying good quality food, nice clothes to wear and a roof over his head, and friends and associates at NEST made his life more comfortable and enjoyable. He is now peacefully and blissfully living at NEST enjoying his life.