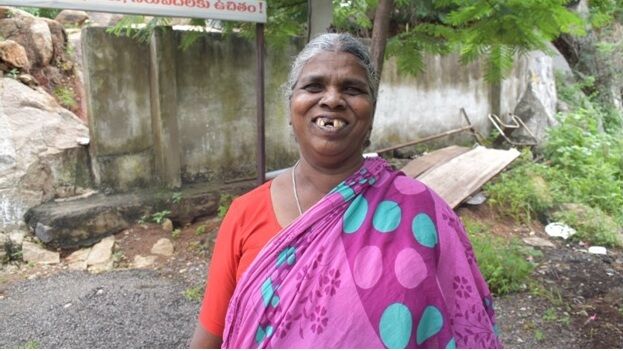 After spending ten years begging on the streets, Yellamma finally finds a home

Yellamma lived with her husband. She had three sons and one step-daughter from her husband's earlier marriage. Even though they lived within minimal means, they were happy. Her husband and her sons earned for the family, and she was a homemaker.

When her husband passed away, she lost her primary support. Unfortunately, all her sons got addicted to alcohol, and all of them passed away due to alcoholism. Her step-daughter got married to a daily wage laborer. Even though she wanted to Yellamma, her own family's limited means didn't let her.

Eventually, Yellamma became homeless. She was almost 60 and couldn't find work. She took to begging and slept on the steps of temples. She hardly ate one full meal on a day.

Many a time she fell ill with no one to take care of her. She could not sustain the hardships of being homeless. For almost ten years, she begged on the streets and slept on pavements and steps of the temples.

One rainy day a good Samaritan saw Yellamma begging at a temple. Her clothes were wet and shivering. She had a high fever. Taking pity on her plight, he called Priyadarshini Seva Mandal. He enquired whether the organization could take this lady into their care.

Priyadarshini Seva Mandal rushed its lady volunteers to the spot to pick Yellamma. They brought her into the NEST, a home for the destitute, homeless senior citizens. They gave her medical treatment, and she soon recovered from her fever.

At NEST, Yellamma gets good quality food, clothes, and toiletries. She even receives regular medical checkups, medicines, and medical treatment whenever required.

Yellamma finally a place she could call home at the NEST. The residents at NEST are now her family. They share their joys, sorrows and all their experiences in their lives.

Without the support and care of Priyadarshini Seva Mandali, Yellamma would have spent her old age hungry and homeless. The home has given her a new life and hope in her golden years.

You can also help poor destitute seniors get a safe shelter that they deserve. You can donate so that they can get the support with which they can live their golden years in peace. You can give with confidence because every program listed is GIVEASSURED.

Priyadarshini Seva Mandali runs a NEST, a home for the destitute, homeless senior citizens who have been abandoned by their families in Andhra Pradesh. This was started in 2012.

One unit of donation to this program will cover the cost of provisions, vegetables and the salary of the cook for a day.

The residents are well cared for by the staff. They are provided with free accommodation, medical expenses, and food. While most of them are too old to take on regular work, some of them keep themselves busy by making cotton wicks and paper covers.

These senior citizens are provided with breakfast, lunch, and dinner. An in-house doctor and medical facilities take care of the healthcare requirements.

The home can accommodate 20 -25 residents. The minimum age of senior citizens living in the center is 60.

When you donate to the program, you will help abandoned senior citizens get access to three meals in their golden years.

Priyadarshini Seva Mandali (PSM) commenced its journey on 27th April, 1991 with the aim to provide a platform for the unprivileged ones. The organisation is registered under A.P Fasli Telangana Society registration Act 1350 F.

The organisation currently works with the grassroot level of the society in order to bring them back to the mainstream of life. They work in 5 revenue mandals in Khammam district, with headquarters in Khammam.

Initially they started with a small group of people. However, with time, several like minded people joined them and became a wonderful part of their journey, contributing precious time in shaping the dream of a beautiful nation. They are focused on facilitating community organization and women empowerment that leads to sustainable development of the society.

Sonabai at 62 Looking Fit and Younger Than Her Age! Thanks to PSM! 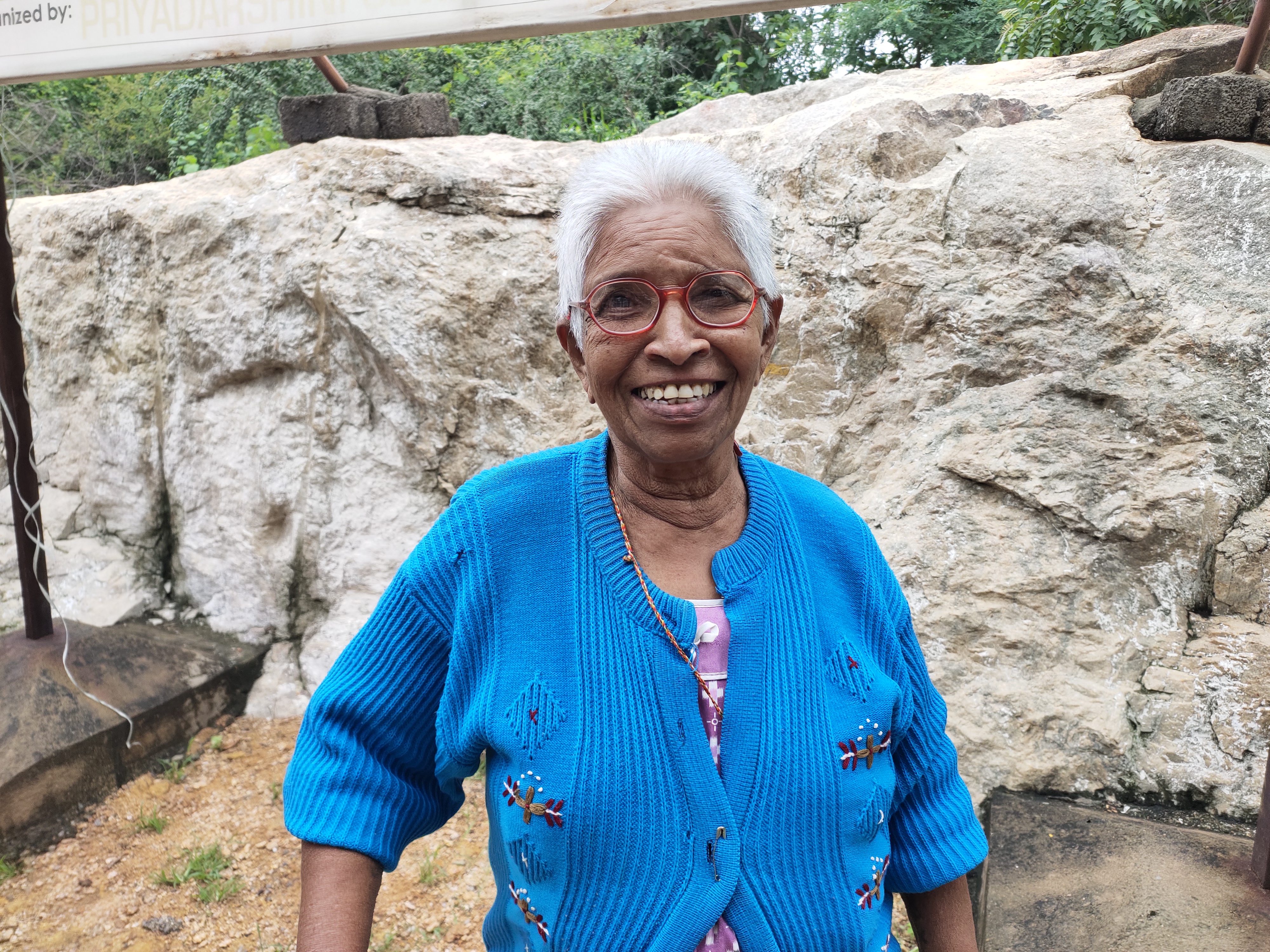 Our dedication to doing something for the abandoned elderly people has kept us moving forward in our task of providing good quality and healthy lives to these hapless senior citizens at our NEST HOME. We help them live a quality life. We take care of their health, providing them medicines and regular checkups. We also provide good food three times a day with tea and coffee. They do yoga and breathing exercises under our trainer to make them fit and healthy. We kept all our inmates safe from COVID through regular monitoring of their health. The major events that we celebrate are festivals. We took our programs to cities and districts in Telangana and Andhra Pradesh with much success, extending our services further. There are 90 people whose lives were impacted with positive results, as they are living a quality life at our NEST HOME. They are all doing well health-wise and are living happily. Through our program, we could help them maintain their health in good condition.

All the usual challenges we face in our implementation of programs, we have easily surmounted. With due care, medication, yogic exercises and a good diet, we could keep COVID at bay. We could surmount all our problems with our enthusiasm and commitment to serve our inmates, keep them in good health and help them live a qualitative life. We continue to go on with our activities of providing a quality life to abandoned elderly people at our NEST HOME.

Stories from the ground:Sonabai is 63 years old lady. She comes from a very poor family. She lost her husband a few years back. She has a daughter who was married off to a labourer son-in-law. Because of the problems at her own home, her daughter could not take care of her mother. Sonabai had her own problems and health issues. She was weak and could not even walk on her own. A distant relative of her brought her into our NEST HOME. After a few weeks of spending at our HOME, she gained her health back. She was unable to even walk at the time she joined. But now, not only is she walking, she is able to do her daily routine chores. This is the speciality of our care. We provide regular checkups; provide medicines and a good diet with nutritious food thrice a day with coffee and tea breaks. 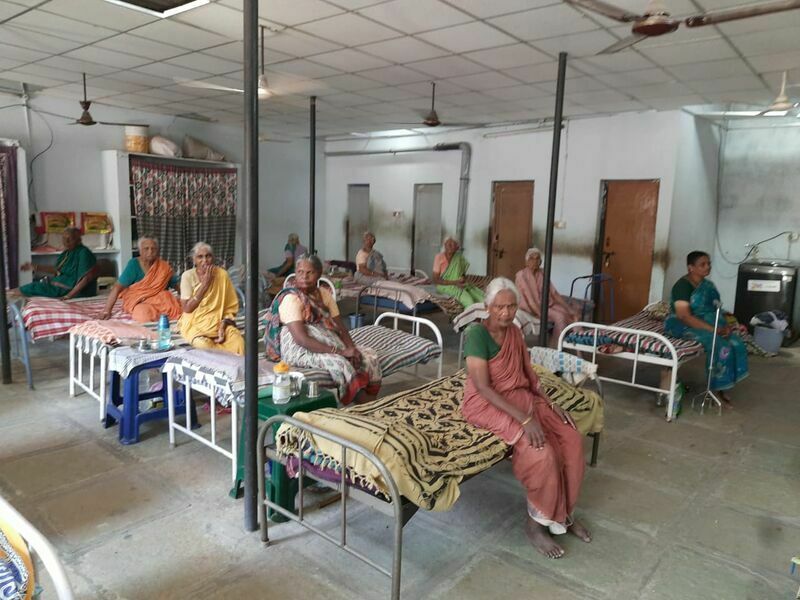 To take care of orphaned abandoned old-age people, Priyadarshini Seva Mandali has started a Home called NEST – a Home away from Home in real sense. At NEST, we are providing these poor abandoned orphaned destitute old-age people the best of everything in life. We are providing nutritious quality food, nice clothes to wear, and a roof over their head. Besides, we are also providing excellent medical care and attention. The other activities at NEST include yoga, meditation, and aerobics sort of warm-up exercises to keep them fit and healthy. At NEST, we have created an ambience of extended family where the inmates live like one big family. From the next quarter onwards we are planning to provide dry fruits and other healthy confectioneries and nutiritious food items. We, at NEST ensure that our inmates should have all the comforts of life.

Narasimha Swamy, aged 63 years is an orphan who was driven away by his children in his old age. After he lost his wife some years ago, he hit the bottle. Soon he was addicted to it. This was too much for his children to bear and they began neglecting him and stopped giving him food making him to go hungry. His daughters-in-law too ill-treated him. Unable to bear the torture, he ran away from home and began to live by begging. The little money he got through begging he used to buy a bottle of cheap liquor. As days went by, his health deteriorated. He became very weak. One of his relatives spotted him on the road in a drunken condition. Taking pity on him, he informed us if we could take care of him. Our volunteers went to the spot and found this Narasimha in a bad condition. We picked him up and put him up at our NEST HOME. Soon under our good care and medical support he regained his health. With our de-addiction counselling he stopped drinking too. Today, Narasimha is very active at NEST helping in gardening activities. He does not feel like he is living in an orphan house. For we maintain our NEST HOME and make them feel it is their own home with a large family. 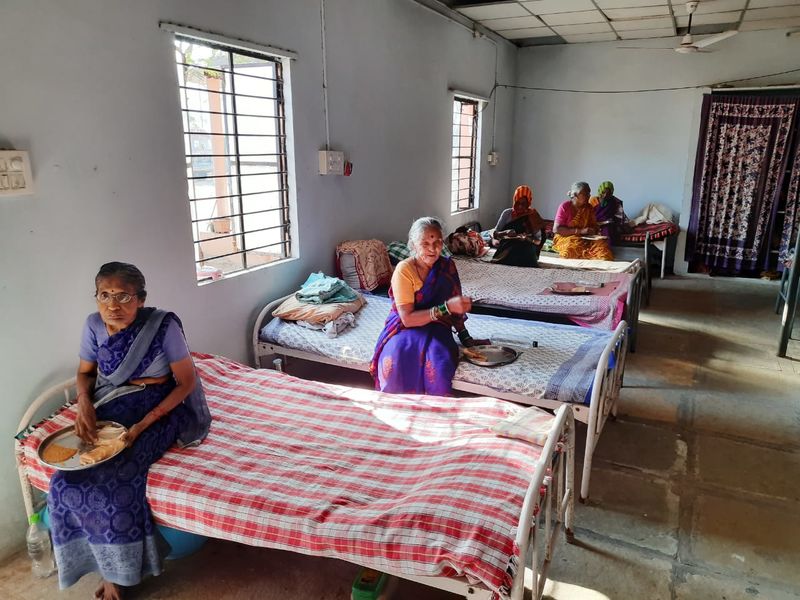 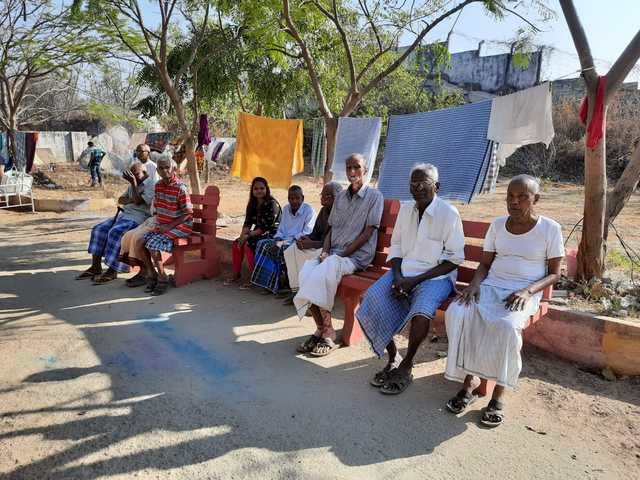 In this quarter the inmates of old age home are increased gradually and for them without telling NO we welcomed into our NEST home. For them we provide free food and shelter as few them are beggars and remaining are abounded by their own families and we celebrated Bogi festival with all the inmates of our old age home. This all can be possible with the support of your donation. 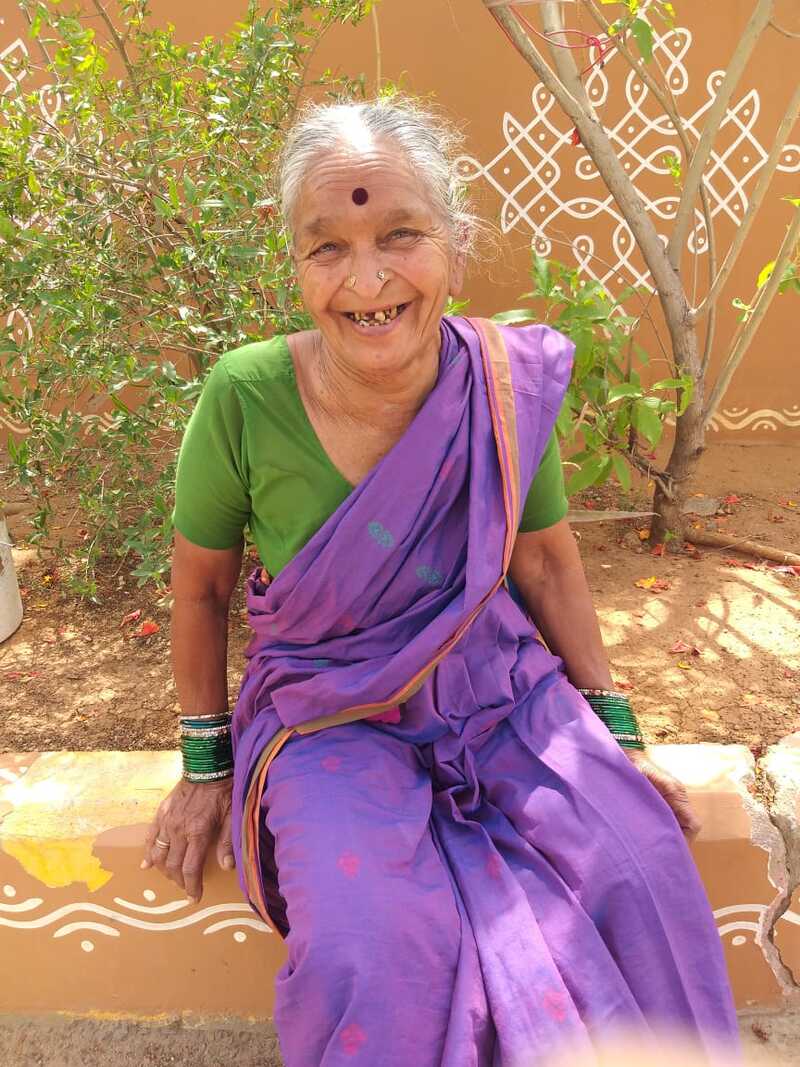 The NEST under the aegis of Priyadarshini Seva Mandali is already rendering yeoman services to the orphaned, destitute, abandoned old-age people. At NEST, we are providing them good nutritious quality food, nice clothes to wear, and a roof over their head. Besides, we are also providing excellent medical care and attention. The other activities at NEST include yoga, meditation, and aerobics sort of warm-up exercises to keep them fit and healthy. At NEST, we have created an ambience of extended family where the inmates live like one big family. From the next quarter onwards we are planning to provide dry fruits and other healthy confectioneries.

Sangamma is an old lady in her late 50s. She suffered much mental torture and physical torture at the hands of her family members. She was too weak and often used to fall sick. Unable to take care of her, her family members neglected her and subjected her to much torture, both physically and mentally. Unable to bear the torture, she one day ran away from the house and reached a temple where she spent her night. From the next day, the temple staff took pity on her and gave her work in the temple that of cleaning, washing and sweeping the temple premises. She was there in the temple living thus for 2 years. As she was too weak and could no longer work anymore, an Anganwadi teacher, nearby the temple, reached out to her and heard her story. Taking pity on Sangamma, the teacher informed the District Collector about her plight and requested her to do something good for her. The government officials, in turn, informed us and brought her to our NEST Home. Soon after reaching our NEST, she picked up her health at a fast pace under our medical attention and excellent care. Today, she is as healthy as a youngster and enjoying her life with other inmates sharing all the joys and pains of their past life.

Feed a grandparent through a community kitchen by Manavlok