Sheela's family kept their hope through all their battles!

Sheela* is a young girl from a poor family in Mau, Uttar Pradesh. Her father worked as a carpenter and a daily wage labourer to sustain them. But no matter how much he toiled, he could never earn enough to take care of the family of eight.

When Sheela was 15, she was kidnapped. Her father searched for her everywhere he could, but in vain. He even got the police involved but they did not help much. When no authority he reached out to helped him, he began to lose all hope of ever finding his daughter again.

When he heard of the NGO Guria, he approached them for help. They pushed the case with the authorities and made sure that it was given the importance it deserved. The police finally tracked Sheela down in six months and a case was registered against the kidnappers.

The accused kept threatening her and her family to withdraw the case. When they didn't agree, Sheela was kidnapped again. She was trafficked to Mumbai by the accused where she was gang raped and sold. When she was being moved again for prostitution, she managed to escape from the trafficker and call her father to inform him about the whole incident.

With the help of Guria, they brought Sheela back home as soon as they could. The staff at Guria ensured that she got the medical care she needed. They also registered her case in the court again and are pushing for her to receive justice.

They shifted Sheela's family to a safer location and provide them witness protection while the trial is pending. They also counselled Sheela and made sure that she got the emotional support she needed to move forward.

Young girls like Sheela need all the support they can get to rise after the trauma they undergo. You can stand up for them by donating to help them with the needed resources to get back up. You can give with confidence because every program on our platform is GIVEASSURED.

*Names changed to protect the identity of the survivor.

Guria provides legal aid to women and children who have been rescued from sex trafficking as well as standalone cases of rape and assault in the community.

They work with the primary aim of ensuring that the perpetrators are put in jail without bail. Conviction is a secondary goal as it takes a long time for court verdicts in the Indian judicial system.

In many cases of abuse, the victims are very reluctant to file an FIR with the police because of social stigma. Many victims are afraid of the authorities and do not have faith that the justice system will protect them. In such cases, they work with the victim and/or their families to help hem lodge an FIR or a complaint in proper sections with the police stations or courts.

After ensuring arrest and submission of chargesheet against the perpetrators they aim to ensure that the perpetrators are retained in jain without the possibility of bail. In case of delayed justice, Guria also work in areas of witness protection, brothel seizures, opposing custody by the same traffickers etc.

The time between the incident and filing an FIR varies from same day to as long as 4 months. The investigation period could by itself be from 6 months to a year. The common roadblocks that are faced are denial of FIR Registration, delayed investigation and filing of chargesheet in improper sections, delayed medical examination of the victims and the accused, delay in recording of statement before magistrate, non-collection of evidences scientifically as per law, no free and fair investigation, facilitating the accused in absconding by delay in arrest

Once the investigation is completed the police file a chargesheet which allows them to arrest the accused and produce them in court.

In parallel to the court proceedings, they also work with the victims providing them counselling aid to help them go back to normal life. In some cases they also provide financial aid along with the government compensation to help them set up income generating activities.

When you support this program you help a survivor of abuse get access to legal aid and counseling.

Guria is a nonprofit organization that is dedicated to fighting child prostitution, second generation prostitution, trafficking of women and children for forced labour or sex primarily in Northern India.

Their aim is to have a world free of these vices, eradicating the slavery of women and their children in brothels, which they aim to achieve by ending their dependency on the criminal nexus involving drugs, sexual exploitation, mafias, police, politicians, and, above all, the impunity enjoyed by all those criminally involved.

Guria’s approach is focused on rescue and legal intervention. Their strategy is to support ageing and former victims of sex trafficking and forced prostitution as well as adolescents so that they themselves do not become victims.

Advocating for improvements in government policy and law enforcement pertaining to trafficking and prostitution is another major activity of Guria. They not only provide justice to survivors, but also work to support them and rehabilitate them.

Guria was started in the year 1993 by Ajeet Singh. His journey into this foray started when he adopted three children of a woman from a red light area at the age of 17!

The strong team of Guria work tirelessly to fight for justice against any form of sexual exploitation of women & children, especially forced prostitution & sex trafficking.

The other programs of Guria include community mobilization, campaigns in schools, sensitization of stakeholders like the police, media, advocates, ngos, cbos, etc, advocacy, international collaborations, health support, literacy and nutrition of children in red light areas through Bal Kendra. 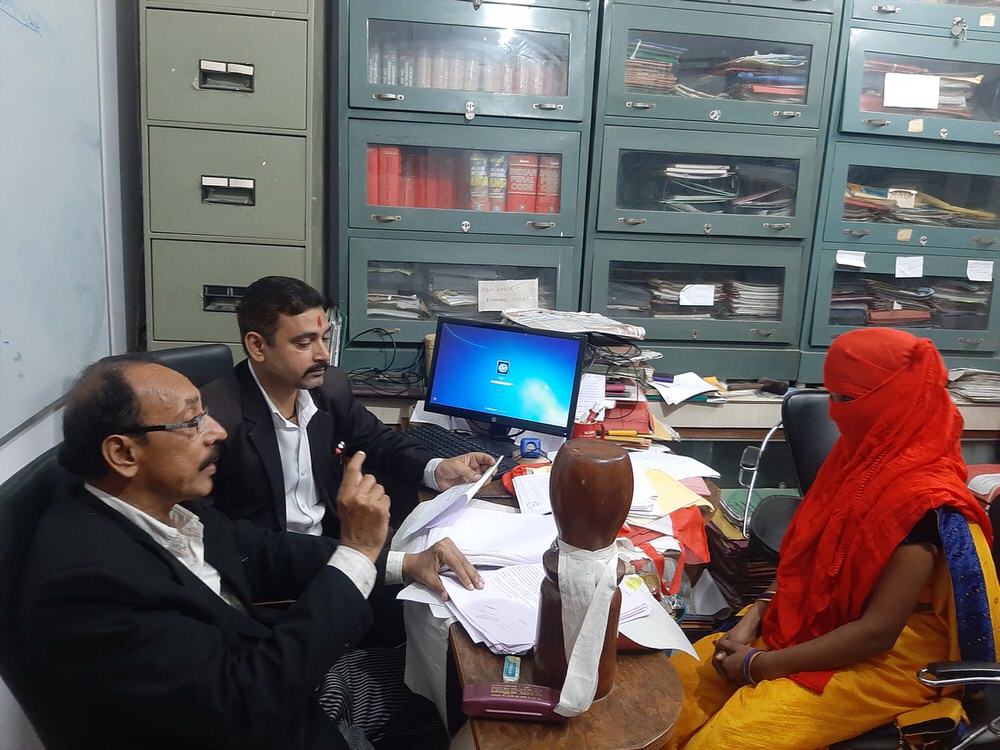 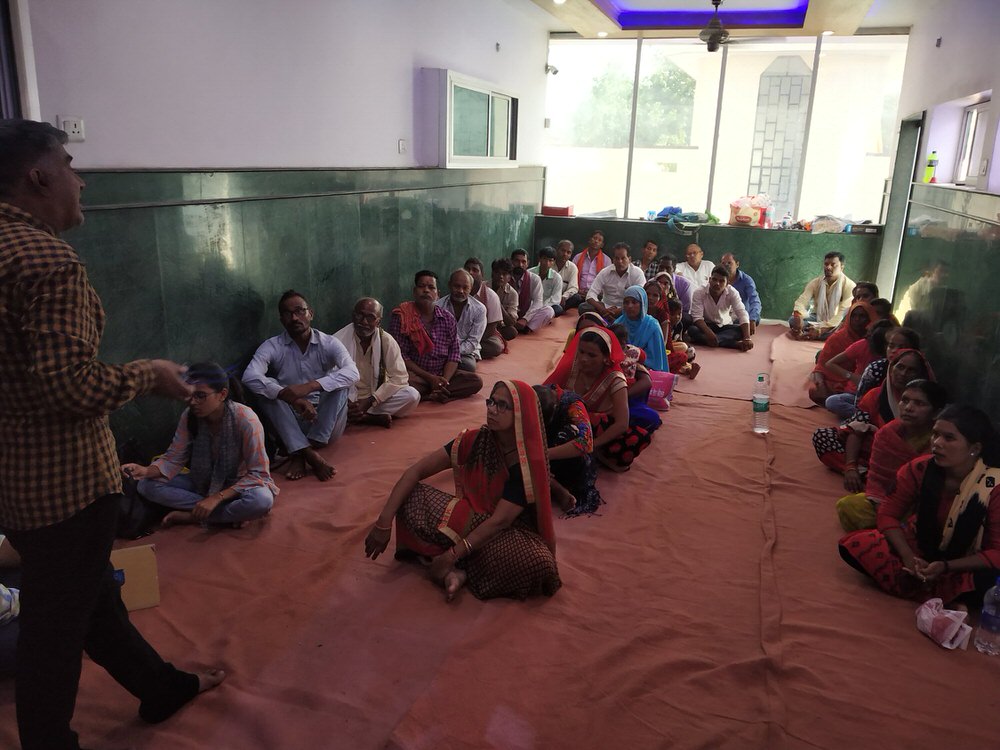 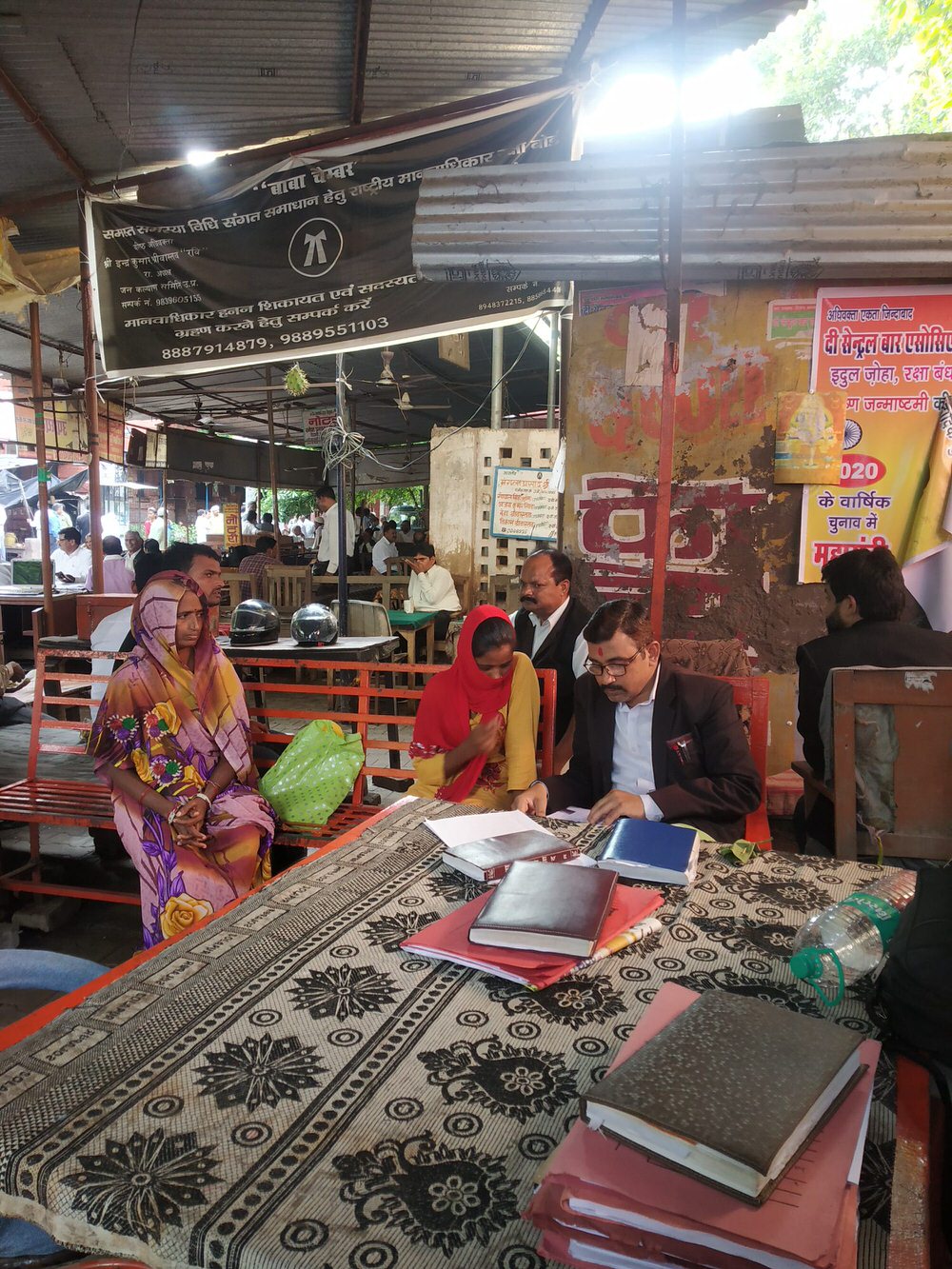 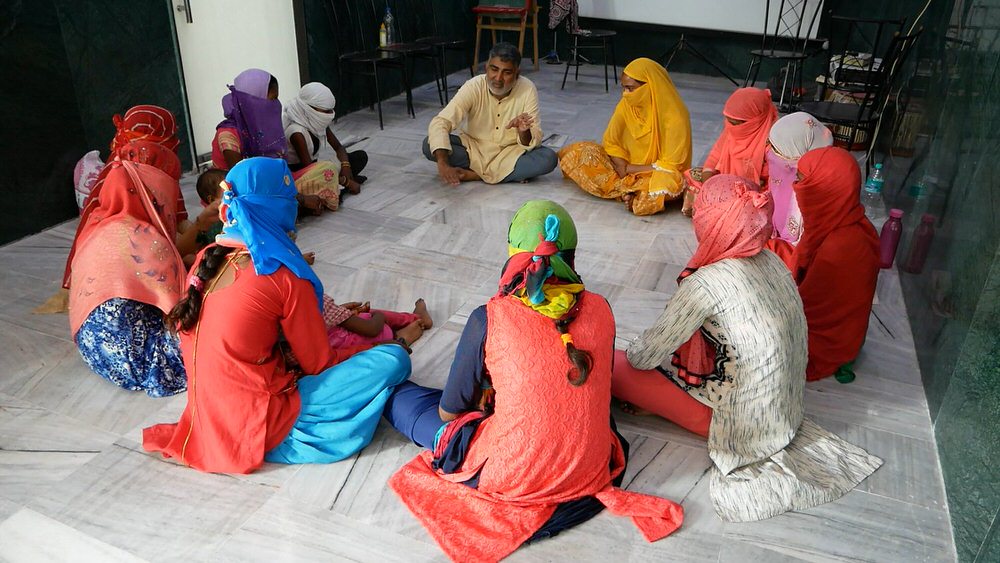 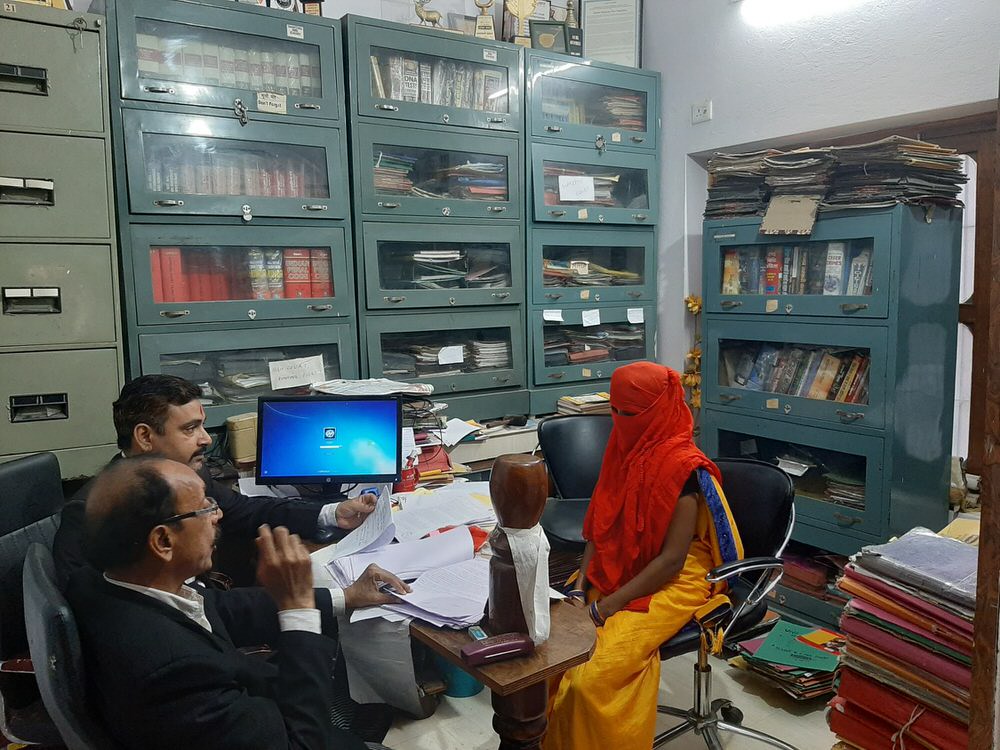 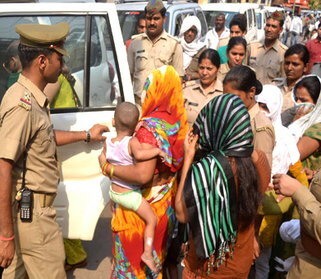 As mentioned in the past, the Allahabad case was one of the historical episodes/milestone in the long run of Guria. The Allahabad case itself extended to about 148 cases in the form of bails, habeas corpus petitions, custody appeals, bail cancellation applications, release contesting petitions right from the district court to the Hon’ble High Court and further to the Hon’ble Supreme Court which are still being pursued. Besides these Guria took up 10 new cases of sexual assault and successfully was able to heal the wounds of 10 victims aggrieved in the said cases. These cases also extended to a total of 18 new cases in the form of bails and custodies. We ensured the safe and secure custody of the victims in the hands of their lawful and biological parents. At the same time, as a part of our innovative strategy, we were successful in achieving the bail rejection of 12 accused from the session court in the theses new cases. There’s a lot to go through in these new cases as well the bigger one at Allahabad. We are undertaking a process of counseling and trauma treatment with these victims together with their socio-economic assessment. Guria also takes the disbursement of government compensation to these survivors on its top priority. Guria has successfully availed compensation of Rs. 1 lakh each to 2 victims out of these 10 from the new cases taken up.

The total number of cases covered and intervened under the program is 176.

Savita (name changed) aged about 15 years and resident of Varanasi was abducted & raped by the accused and his companions. The father of the victim tried hard to search for her whereabouts but all in vain. After a lot pain, he got a complaint registered at the Shivpur police station of district Varanasi under sections of abduction and sexual assault of the minor victim. Guria was following the case from the very beginning and through our regular & tireless effort the minor girl was recovered from the clutches of the traffickers. Guria ensured the safe and secure custody of the minor girl into the hands of her legal and biological parents. The investigation is still going on in the said case and letters are being moved for the arrest of the accused responsible for the crime. Guria’s effort has also lead to the disbursement of Rs. 1. Lakh compensation to the victim. At present the victim is living happily with her family and she is very positive regarding her future. Due to Guria’s support, she is now in a very strong and empowered position to brighten her future. Currently we are holding regular sessions with her and her family so that we could counsel them and help them adopt the best option of livelihood which would make them stand with a much more stronger feet in the mainstream society.

Guria has been making deep effects in the lives of some girl children through this program.

Guria was the first to expose the trafficking of 57 girls from the Government Shelter Home in Agra. This lonely struggle to establish the truth was further corroborated by two new major revelations of sexual exploitation in shelter homes at Muzaffarpur in Bihar state and Devariya in UP state.

In addition to documentary evidences, we were successful in ensuring deposition of 12 prosecution witnesses, including guria's testimony in court. After final hearing and submission of written argument in the matter, the trial court sentenced the Superintendent of the protection home with life imprisonment (till the end of her life) under section 370 of the Indian Penal Code for the first time in the country. This was also the first ever conviction in the country of any superintendent of protection home in the context of recent nationwide revelations of rape, murder and trafficking of the inmates.

Guria in coordination with the district administration Allahabad rescued about 140 victims from the Allahabad red light area. Thereafter, these victims were inhabited in Government Protection Home Agra for their rehabilitation process which was being done by the State. The Superintendent, in collusion with the traffickers/brothel keepers, re-trafficked 57 victims from the Home. Investigation was done and prosecution against the Superintendent was initiated on the written complaint by Guria to the State and other higher authorities. After completion of trial, Superintendent of Government Protection Home was sentenced for her whole life under section 370 of the Indian Penal Code.

Much before the revelations at Muzaffarpur and Deoria, Guira had exposed the trafficking racket in government protection home, testified and advocated in the matter in the trial court. Guria was attacked by the criminals in the process of getting her three bails rejected from the district and high court and while testifying. This was also the first ever conviction in the country of any superintendent of protection home in the context of recent nationwide revelations of rape, murder and trafficking of the inmates.This conviction has created a deterrent for other members of this organized crime and has also set a precedent for others.

120 people are currently supporting this.