Plant a tree to support the rural farmers by SankalpTaru Foundation 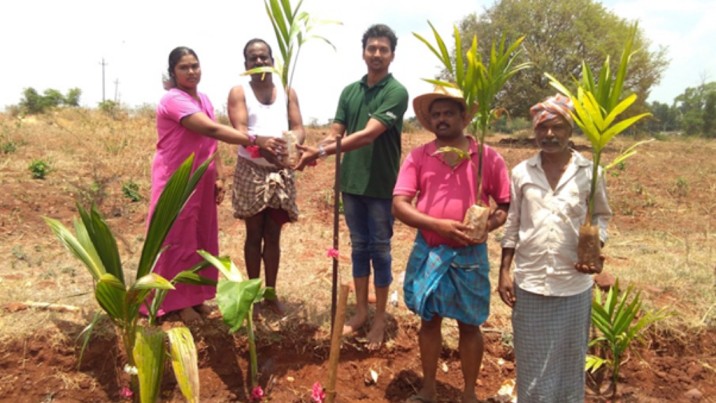 Laxmi Dev Amma is one of the rural farmers in Chikmagalur district of Karnataka on whose land the team of SankalpTaru had carried out its Rural Livelihood Support Program. Because of scanty rainfall, the district faced severe water scarcity to the level of a serious lack of drinking water and utmost level of ground water depletion. Due to this, Laxmi Dev Amma and other farmers in the region faced multiple crop failures leading to the increasing level of suicides among them. Thus, the need to increase the water level and rainfall in the area so as to sustain the livelihood of the farmers came into consideration.

Here's when Team SankalpTaru intervened and came into action. SankalpTaru Foundation initiated Rural Livelihood Support Program in the Chikmagalur district. The team members planted the saplings of Areca Nut on the land of Laxmi Dev Amma and other farmer beneficiaries. Areca nut is one of the most important commercial plants because of its twofold use - the first one being the yielding of 5.5 to 7 kilos of betel nut per tree per year, and the second one being used as an eco-cutlery.

The Areca nut saplings produce maximum yield in minimum amount of water. This had increased the yields in the land Laxmi Dev Amma and other farmer beneficiaries so that they can earn regular income without any major loss. The drip irrigation system is used by the farmers to water the saplings. Also, eco-cutlery made from these plants after they shed are an alternative source of income for the farmers during times when there is little yield.

This intervention by SankalpTaru Foundation has given a ray of hope to farmer beneficiaries like Laxmi Dev Amma and others. Laxmi Dev Amma is now acting as a mentor to other farmers, both men and women. Rural Livelihood Support Program has acted as a pillar to provide hope and strength to rural farmers in the states of Uttarakhand and Karnataka. Your contribution towards the project will act as a major step in increasing the agriculture, enriching the biodiversity, and saving the lives of the farmers. So, don't wait, plant a tree now and save a life!

SankalpTaru Foundation, as the names suggests, is an e-NGO or an IT enabled NGO, as you may call it, active across 18 Indian cities with its pledge to plant trees for the people, by the people. The organisation believes that planting trees has many benefits, ranging from the power to fight pollution, strengthening the livelihood of farmers, to increasing the life expectancy of our planet.

With the mission to create a clean, green and healthy planet and a vision to enrich the biodiversity with lush green plants, SankalpTaru works with all their capabilities to plant as much trees as possible so that our present as well as the future generations can have a bio-diverse sustainable environment.

Since the plantation drive is for the people, by the people, SankalpTaru uses geo-tagging and other advanced environmental techniques in order to make it easier for people to track their planted trees. The plantation drive majorly consists of four operational models, namely Rural Livelihood Support Program, Clean and Green School Program, City Based Plantation Program, and Community Land Plantation Program. All of the operational models are based on constantly escalating happy smiles through healthy trees.

Your Donations : A tree of a lifetime for the Indian farmer. 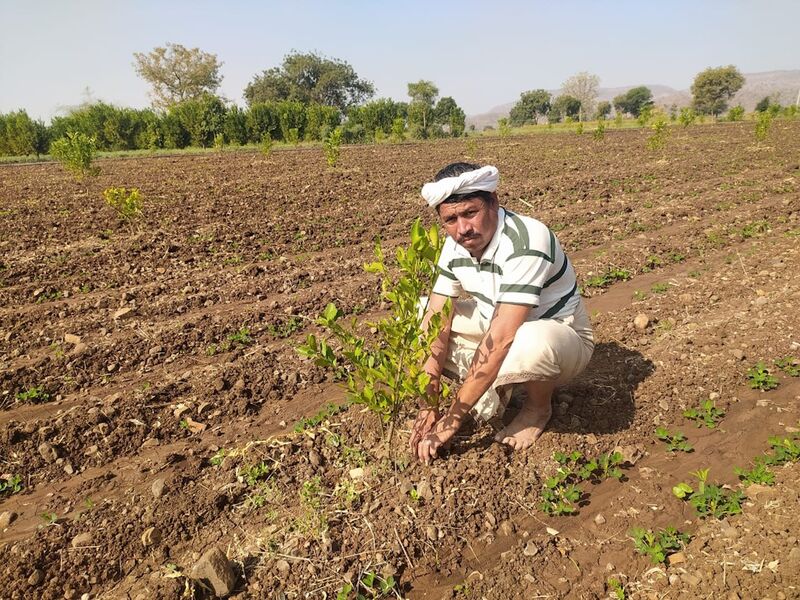 The COVID-19 pandemic which affected the entire globe, had its effects on the farming community as well. Farmers across India were affected by the sudden drop in income and rising debts. However, green patrons like you stepped forward to donate for farmers and planted trees on their lands to give them a ray of hope. Through your donations, SankalpTaru planted more than 500 fruit bearing trees of Guava, Jamun, Arecanut, Coconut, Pomegranate, Mango, Custard Apple etc. on the lands of its farmers beneficiaries across India from May 2020 to December 2020. The trees provided the farmers a sense of security and will help them shield themselves from similar shocks of a global pandemic.

The trees will sequester 2 Lakh Kgs of Carbon in their lifespan, produce 15 lakh kgs of Oxygen in their lifespan, produce 45000 kgs of fruits per season for the farmers and absorb more than 70 lakh litres of water in their lifetime. The trees will help the farmers produce more than 90 kgs of fruits per tree per season and help them earn a decent livelihood. The trees planted by SankalpTaru Foundation have also been fitted with a drip irrigation system to use resources judiciously and ensure maximum efficiency. The farmers on whose lands Arecanut trees have been planted have also set up small cottage industries to manufacture Arecanut tableware as a sustainable and eco-friendly cutlery which is allowing them to earn additional income. Additionally, the trees under the ‘Plant a tree to support the rural farmer’ have been also planted on the lands of women farmer beneficiaries which is helping women farmers get their due in agriculture and also making them self sufficient. 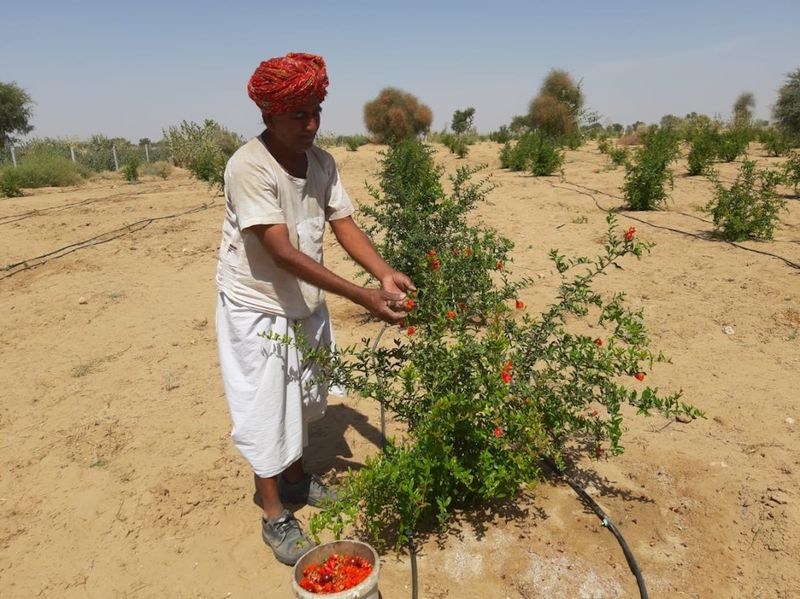 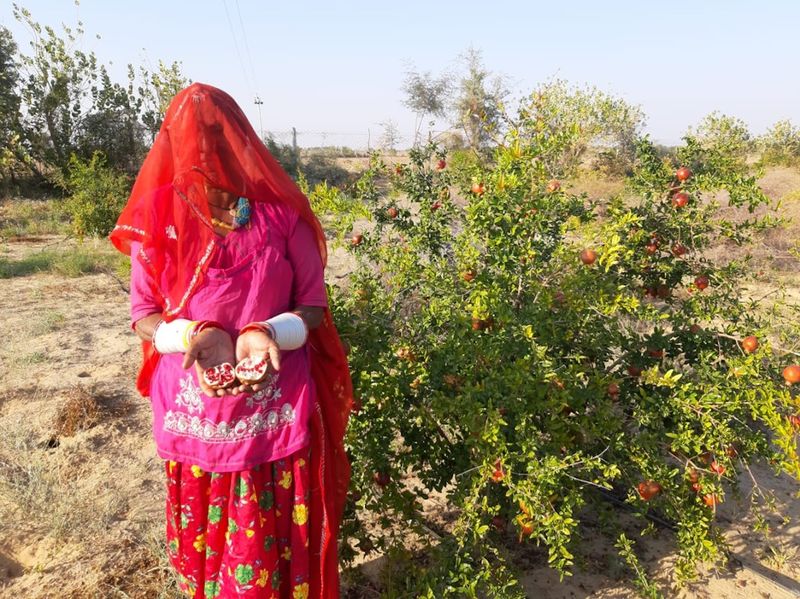 The last quarter had been really a challenging phase for the plantation. However, the team at SankalpTaru Foundation did beat each and every challenge coming their way and planted 25000 saplings. These saplings will produce 300000 liters of Oxygen, will sequester 50000 kg of Carbon-dioxide, will absorb 14395000 liters of water in just 1 year.

Out of these 25000 saplings, 70 percent of these are fruit-bearing plants that were planted on the farmers' lands in the last quarter. After 3 years, these 70 percent saplings will produce 10 kg of fruits on an average in 1 year per tree. That means a total of 175000 kg of fruits will be yielded from these plants in just 1 year. Our fruit-bearing trees are of varied species like pomegranates, lemons, oranges, etc, all of which have a high market value. Taking into account the average market value to be 40 Rupees per kg for each fruit, the total income generated will be 7000000 Rupees. Thus, these saplings will act as an alternate source of income for these farmers who now are dependent on the seasonal crops for earning their livelihoods.