by Saath (Initiatives for Equity in Development) 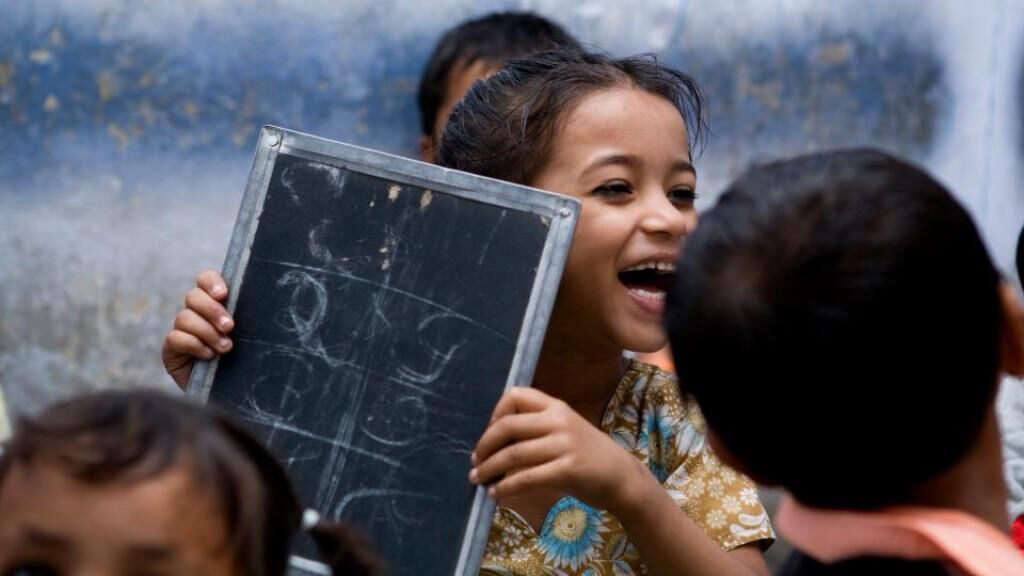 Learning disabilities are no match for Alfeena’s spirit today!

Alfeena had a difficult life from the day she was born. Her birth mother abandoned her at the hospital. But Kausar Sheikh, a woman from a village in Gujarat called Juhapura decided to adopt her.

But Afreena’s life did not get a lot easier. When she was 10, her teachers realized that she had several learning disabilities. She could not express herself and it became hard for people around her to understand her. This made her withdraw into herself.

Her teachers at Balghar met with her parents and told them what was happening. They expressed their worries and asked her parents to join them in guiding her. The constant efforts of the Balghar tutors and her parents helped Afleena develop both mentally and physically.

She has now grown from a shy, fearful and insecure child to a jovial child. This has been possible because of the learning activities she was given. Her teachers say that Alfeena has a sharp mind and learns well with practical learning. She is in the third grade and with continuous practical learning will go on to finish her education with flying colors.

Poor children like Alfeena often do not have the right guidance they need to learn differently. You can change that. Your donation will them a chance to realize their true potential.You can give with confidence because every program on our platform is GIVEASSURED.

SAATH runs Balghars that provide pre-school education and nutrition support to underprivileged children from the slums of Ahmedabad. The curriculum has been specially designed with the help of expert child psychologists in collaboration with teachers to improve and strengthen the quality of pre-school education components.

Saath (Initiatives for Equity in Development)

Saath (Initiatives for Equity in Development)

Saath (which in Hindi/Gujarati means 'together, co-operation, a collective or support'), is an NGO in India registered as a Public Charitable Trust and is based in Ahmedabad, Gujarat. They closely work with the vulnerable communities and empowers the socially marginalized by providing them livelihood linkages, imparting skills leading to employment, health and education facilities. The focus areas of Saath are livelihoods, skill development, health and education, rights, urban governance, financial inclusion, rehabilitation and resettlement and other community development initiatives.

Saath envisions inclusive and empowered communities and individuals.They aspire to make human settlements equitable living environments where all residents and vulnerable people have access to health, education, essential infrastructure services and livelihood options, irrespective of their economic and social status.They have received several accolades for its programs, internal systems, organizational ethics, best practices in resource mobilization and sustainability models, the latest one of them being the - India NGO Award 2014-15 in the Medium category.

In the last 27 years, they have rendered their services to several slum residents, migrants, minorities, children, women, youth and vulnerable people in Gujarat, Rajasthan, and Maharashtra (Mumbai) and have touched the lives of more than 5,00,000 individuals.

Fun Activities during the Pandemic at Balghar

Activities at Balghar • Education • Nutrition Support • Health Checkup • Exposure Visits • Outdoor extracurricular activities • Celebrations of the Festivals • Enrolment to formal education Milestones Achieved: • Ongoing activities focusing on the holistic development of child • Health Check up of all the children • Growth Monitoring and Nutrition Support • 250 households surveyed under the covid awareness campaign • Distribution of sanitisers to the parents. • Sensitization of the parents for COVID vaccination. • Children were fed fruits, eggs, and milk once in a week. They are given healthy take home snacks sufficient for the child. • They received freedom to play, eat, and study as the centres reopened. Major Events • Sensitization of the parents towards educational needs of the children during COVID through door-to-door parents teachers meeting in the community. • 250 households surveyed under the covid awareness campaign Areas Covered • Juhapura- 7 Balghars Number of People Impacted • 1500 Individuals How were they impacted? • Direct reach through door-to-door meetings and household survey for COVID awareness. • Children attending the Balghar

Challenges in Funds/ Carrying out operations • Due to COVID on one hand we had to divert the efforts and funds for immediate relief and on the other hand we had to run our regular programmes amidst the pandemic. Challenges due to COVID • People from the community lost their savings. • Many were indebted due to the loss of employment and COVID related hospitalisation. • Families did not have sufficient food to eat and felt difficulty in sustaining. COVID related hurdles at the centre • Summer activities were not held. • Lack of staff as teachers were infected by COVID at some point of time. • As teachers belong to the same community as the children at Balghar, they also faced financial crunch at home. • The teachers were fearful to do home visits. How did you overcome the challenges? • Immense care was taken once the balghars were restarted. Social Distancing, masks, hand sanitisers etc is compulsory. • Parents Meetings are held in small groups and door to door method. • Children are given the snacks at home rather than allowing them to eat in class. Note: The fun activities like celebration of different festivals, exposure visits, sports day etc. was not carried out due to the COVID 19 pandemic. Plan of next six months. • Group meetings with the parents. • Exposure Visits • Celebration of festivals • Teacher Training • Health Check-up 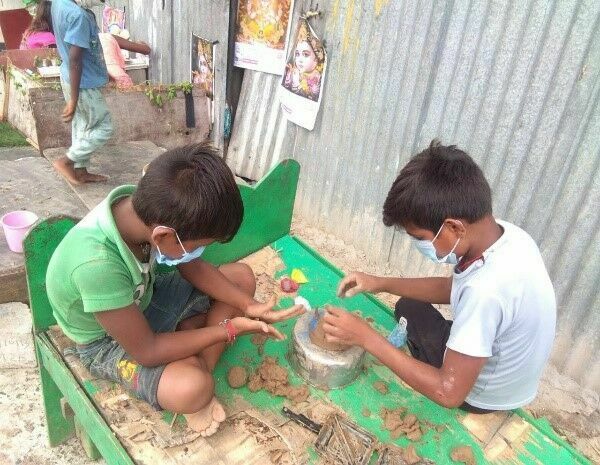 Due to the lockdown caused by pandemic our regular classes are functioning differently to support the children and address their needs. Since July, 2020 our teachers goes to the community where the children live and forms small groups of children and undertakes activities in their respective homes, by following strict social distancing and making sure that the children wear masks. Independence day was celebrated by doing flag hosting in the labour colony. Children were standing a distance, they sang national anthem. Children good cookies and hygiene kits as goodies. During Janmashtami festival children were called to the center and precautions were taken that every one wore mask and were seated in the open. Teacher dressed one student as Krishna and then everyone plays and sang songs. Lunch was served to children and everyone enjoyed and had lot of fun as after so many months they got together. Diwali was also different this year. Due to the rise in cases in the city we cancelled all our plans for celebration, however we wanted children and families to enjoy the festival and spread positivity and smiles. We gave rations to the children and made sure that they and their families stay safe and celebrated Diwali at home. The children celebrated Independence Day, Janmashtami and Diwali with the guidelines of new normal. Several meetings have been conducted with the parents and the community on how to take care of the children during this time and ways to provide them nutritious diet with the available local and inexpensive food. They are also informed about immunization and vaccination of the children. Focused Group Discussions are conducted in the community on a regular basis to understand the perspectives of parents towards a given topic and promote them to take their decisions towards the betterment of the child. Role play, story-telling and activity-based learning has been carried out through door to door visits and learning in small groups. Story Telling and Enacting is another major aspect where the children can speak and understand the concept of education through activities. Through these activities the students can grasp the concepts easily. The children are also made to perform art and craft activities like drawing, painting, origami, clay modelling, structure making out of glass etc. This helps in developing the fine motor activities of the children. Activity based games are also played during the extra-curricular session which allows all the students to participate and engage in the activities and learning. It is seen that such activities are improving the bonding, learning, and experiencing a new way of education among all the students.

Learn with some Fun

Learn with some Fun 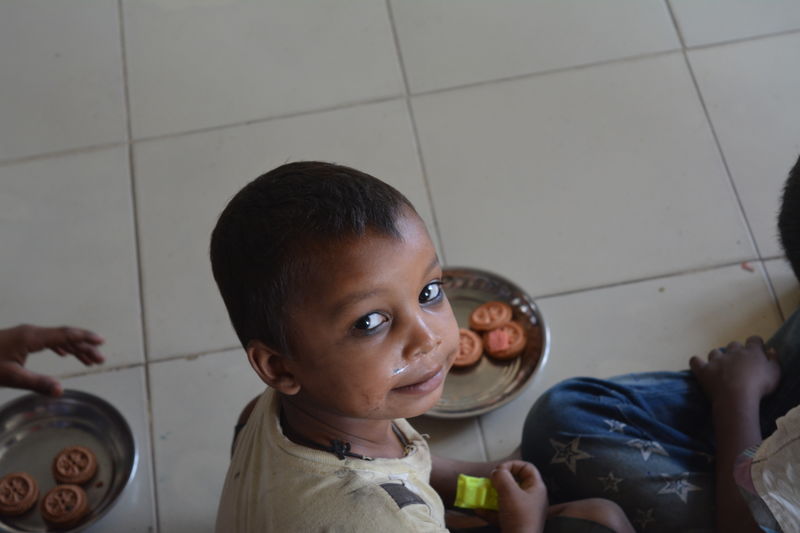 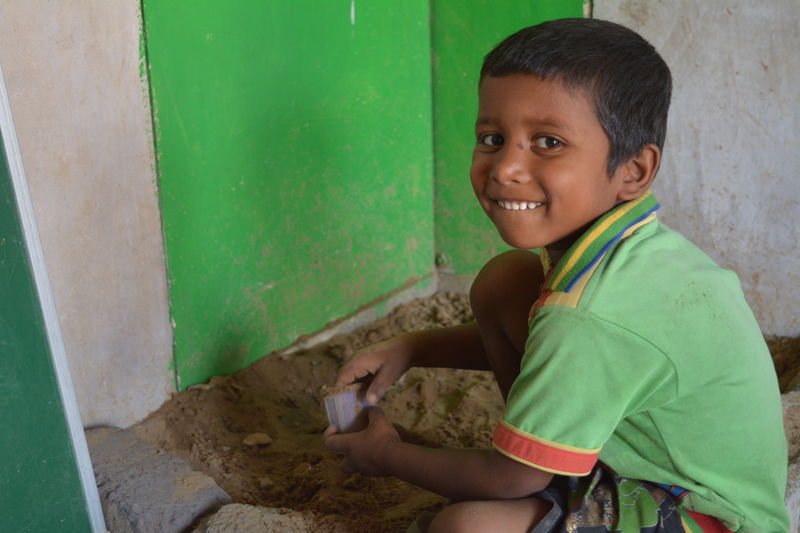 A typical day at the center starts with prayer then with songs and rhymes. Teacher teaches them how to read and write Alphabets, Numbers. Then they play some outdoor games and after that they have their snacks.

We had organized Nutritional awareness session for the mothers of our students. The session was conducted by head of the paediatrician department of VS Hospital. Doctor urged mothers to provide nutritious food to children for strengthening their immunity and discussed daily schedule for children. 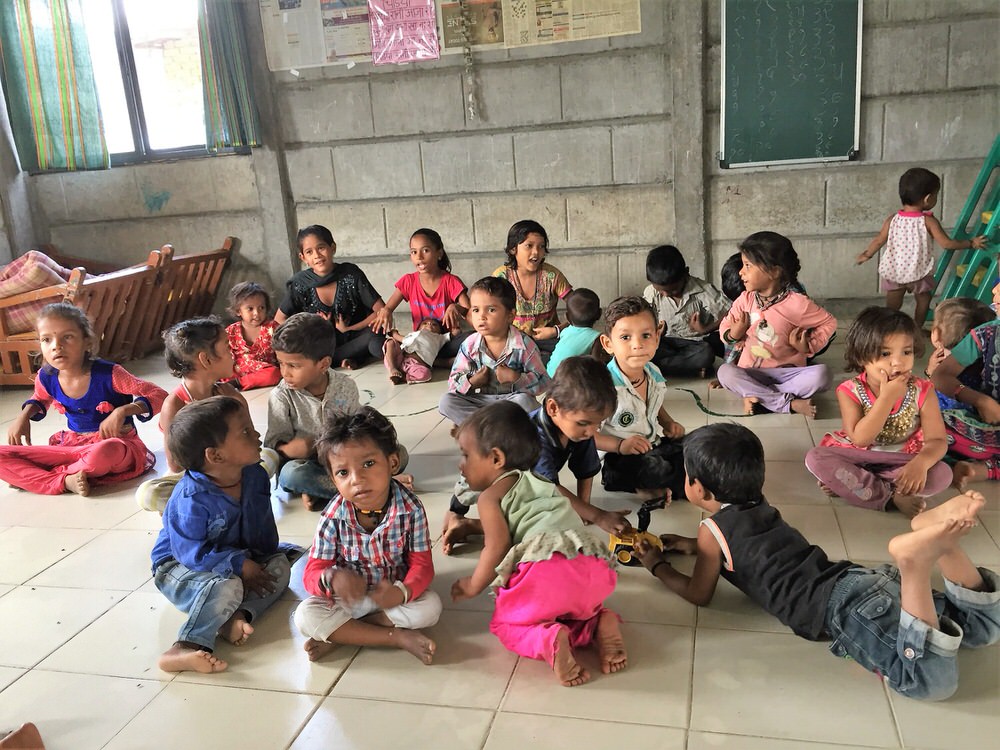 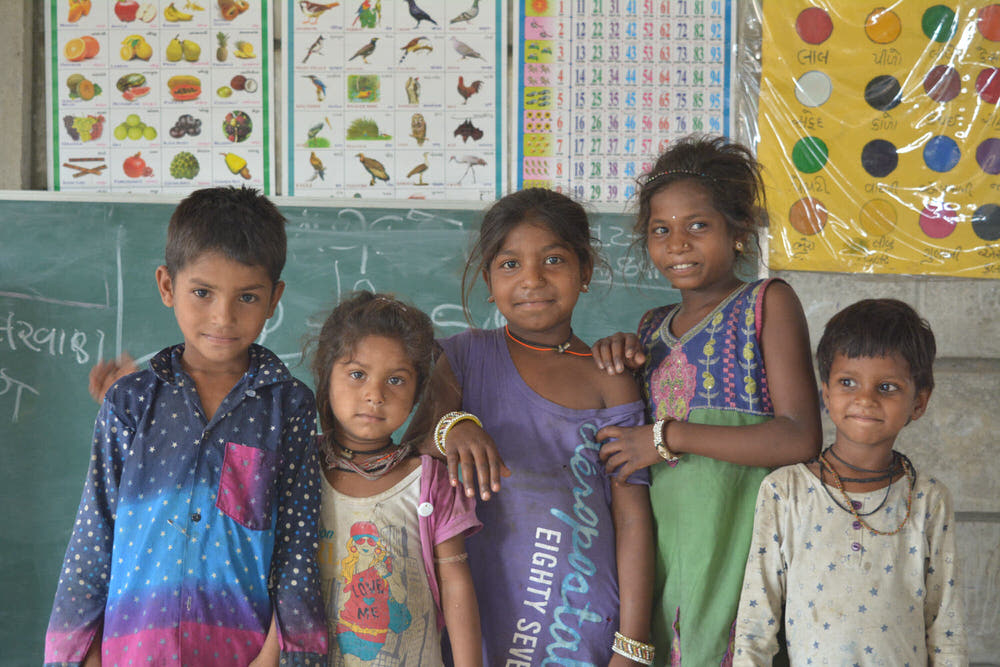 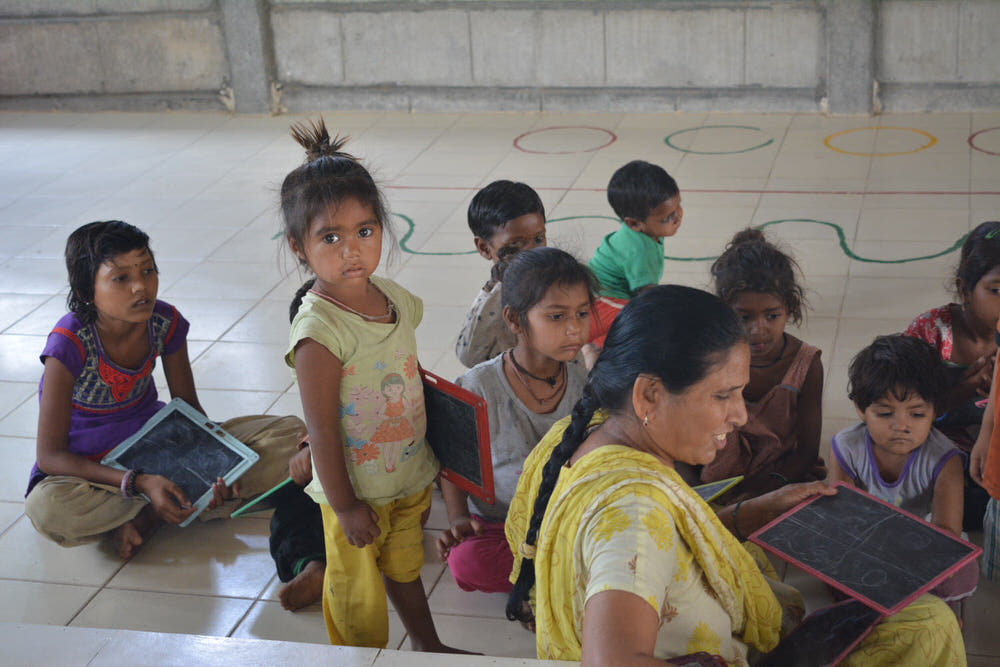 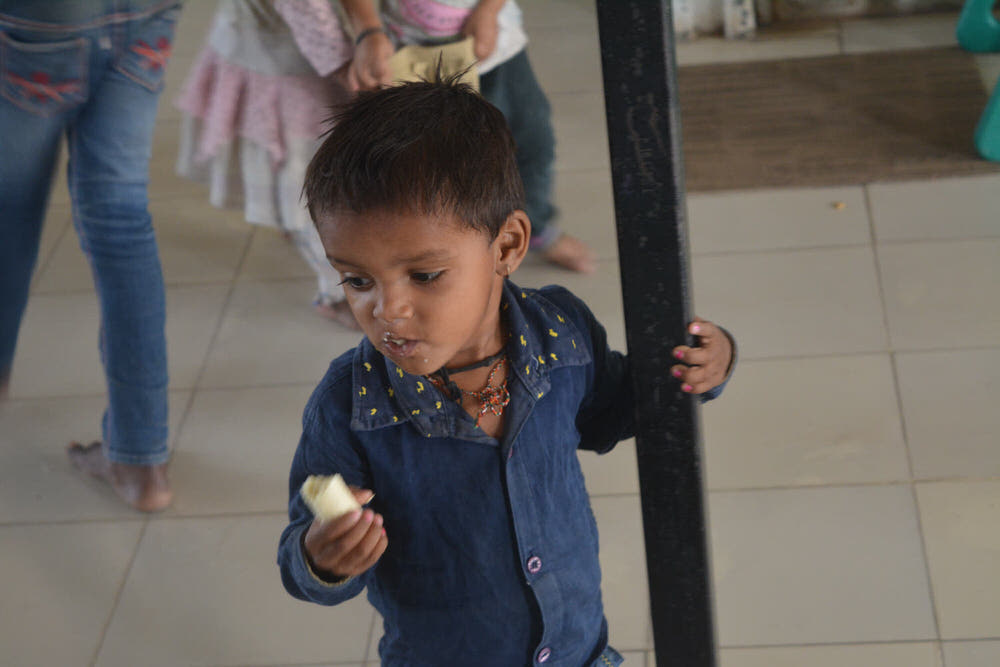 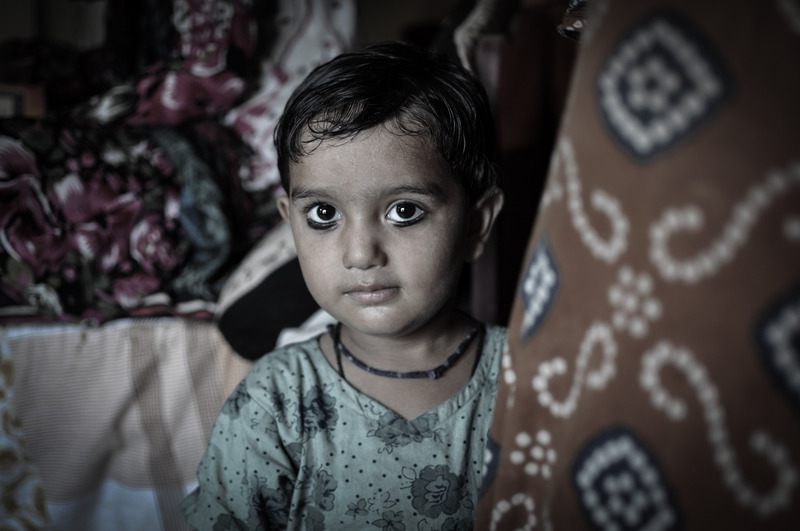 A typical day at the center starts with prayer then with songs and rhymes. Teacher teaches them how to read and write Alphabets, Numbers. Then they play some outdoor games and after that they have their snacks.

There is parents – teachers meeting every quarter where parents are given updates about their child’s physical, mental and behavioural growth. In the month of February, we took children from Balghar to Kankari Bal Vatika (Zoo and Amusement Park). Children played the colour game in open ground and information about various plants was given through games. Children were fascinated to see different kinds of animals and birds, after their meal they were taken to the ‘Mirror House’, which amused them so much to see their body shape changing. While going back home they took a ride in toy train.

Aneeza Rafiqbhai is a 4 year old daughter of a domestic maid and a rickshaw driver. During the community visit for admissions for academic year 2018-19 our teachers of Balghar met her parents and convinced them to send their daughter to school. When Aneeza came to the Balghar in July 2018, she was very nervous she used to cry a lot. Teachers immediately noticed that she was very weak and was suffering from malnutrition. The teachers first focused on her health. Teachers also counselled her parents and told them Aneeza’s nutritional requirements. At first she was only interested in playing with toys in the class and would immediately start crying if asked to study. With constant care and attention, the teachers improved her attention towards learning and her health started improving as well. Now, in a few months there has been a lot of change in her. Her weight has increased and she is much healthier now and has started enjoying studies as well. She now sings in the class, writes in her own slate, counts from 1 to 20, reads charts and takes part in all the other activities. Her teacher says, “The biggest change has been that she now helps other children as well in the class and is always happy to study”.

Celebrations galore at the SAATH

Christmas is again the time of celebration with decorations and many visitors. The children were taken out for lunch to restaurants to celebrate the special day.

Diwali is the time for festivities. A lot of donors visited the centers and distributed food and sweetmeats to the children. The students were taken to visit the Amul Dairy in Anand. The children were explained about the importance of Milk and the products that are made from Milk such as buttermilk, yogurt, preparation of milk from Powder etc

Hygiene Kits were distributed to the students by a Canadian visitor in the Rajyash Riverium Center. The children were taught about the importance of Hygiene and how to keep them themselves neat and clean.

Medical camps were conducted in the centers at all the CFS centers in last six months. Children who were diagnosed malnourished were given supplements and children suffering from some illness were referred to govt. Hospital