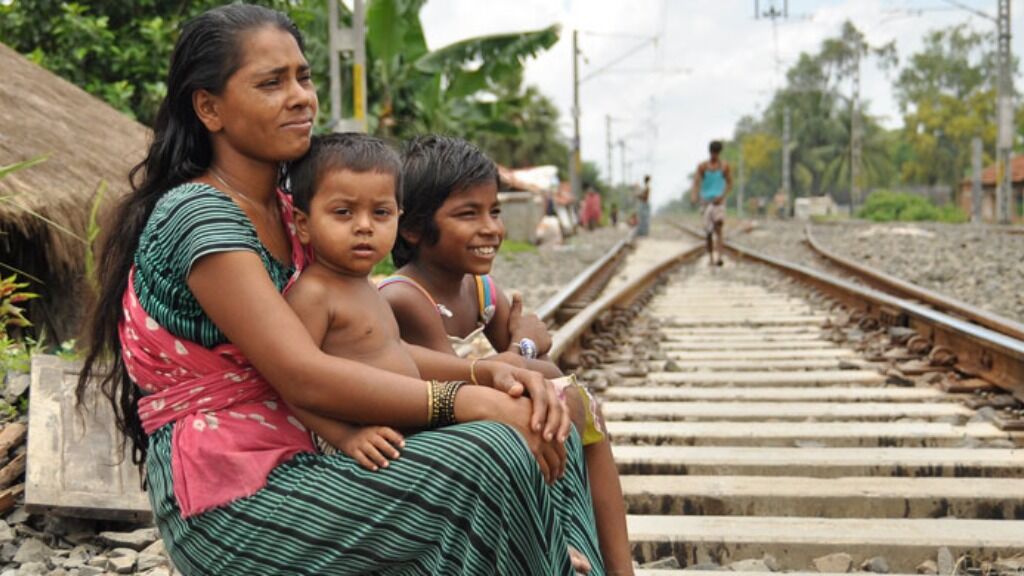 Malnourished and pregnant, Aparna finds support in a Swasthya Sevika to deliver a bonny baby

"I was afraid to go to the hospital to give birth to my baby, but they were so nice to me that I did not want to leave." - Aparna.

Aparna came to live in Nandakumarpur in South 24 Parganas after her marriage.

She met a Swasthya Sevika - community health worker, of Sabuj Sangha who suggested that Aparna should take a pregnancy test. The pregnancy test was positive. Aparna and her husband were overjoyed that they were about to welcome their first child.

However, her husband who was the sole earning member of the family had a meager income. This led to Aparna being severely malnourished. She weighed just 34 kg, and her blood pressure was alarmingly low.

The Swasthya Sevika advised Aparna to take care of herself so that she could have a safe delivery. She was encouraged to follow a healthy diet and take adequate rest. The community worker conducted regular antenatal checkups to ensure the health of mother and baby. Her weight increased over time, and she weighed 41.7kg in the last month of pregnancy.

Aparna was also advised to go to Anchal, the local sub-center to receive a tetanus injection.

Due to her condition, the health worker felt it would be safer for Aparna to have her baby in the hospital. Aparna was admitted to Sabuj Sangha Rural Health and Training Centre on her expected date of delivery. Later that night she gave birth to a boy weighing 2.4 kg. She received a hypothermia kit after the safe delivery.

The health worker continued to guide her about infant care and feeding techniques for several months after the delivery,

The access to a healthcare center and counseling helped turn Aparna's high-risk. pregnancy to a normal and safe delivery

You can also help people like Aparna get access to basic and primary healthcare facilities that they deserve. You can donate so that they can have a healthy life and not fear simple illnesses. You can give with confidence because every program listed is GIVEASSURED.

Sabuj Sangha runs a Comprehensive Rural Health Care Center for the underprivileged people in the remote islands of Sunderbans in West Bengal.

Donations to this program will contribute to a fund that will cover the cost of honorarium for doctors, nurses, and support staff for the health center.

South 24 Parganas district of West Bengal is a vulnerable community. The area suffers from many problems. The people are economically backward, the area is undeveloped, there is a lack of infrastructure development, and is natural calamity prone.

These reasons hinder any growth, and as a result, people lack access to basic healthcare facilities.

Sabuj Sangha's comprehensive Rural Health Care Center is a part of their 'Health and Nutrition' thematic development. One of their primary concern is the health of the poor people in the area.

To address that they run two health centers, in Patharpratima and Mathurapur 'II CD Block of south 24 Parganas which are equipped with facilities like an OPD, IPD, Pathology and Radiology laboratory, pharmacy and a nursing home.

They also have a lifesaving drugs preservation unit that is run on renewable energy due to the unstable electricity supply in the area. They also have a VCTC ' voluntary counseling testing center.

There are 10 Doctors, 8 Nurses, 6 Support staff and 4 Technical staff attending to 40 people every day. There are about 24 community health workers that work in the communities around the health centers.

The services of the health center are charged to patients based on their ability to pay. People who can afford it pay the full amount of bill and for some, the costs are subsidized. 90% of patients visiting the clinic are economically backward, and for them, services are entirely free.

When you donate to this program, you help poor people from a remote area get access to primary healthcare that they deserve.

Sabuj Sangha is committed to improving the lives of people who are less fortunate in West Bengal, India, through participation and empowerment. Community engagement is an essential aspect of all their health and nutrition activities.

Their healthcare staff holds regular health camps throughout villages in the Sundarbans to spread information about the importance of a nutritional diet and sanitation practices. Their staff also works to link communities with service providers so that patients can access mandated Government services and schemes.

Their Safe Motherhood in the Sundarbans program aims at reducing maternal and child mortality through increased antenatal and postnatal care. Pregnant women are facilitated to register their pregnancy at Government sub-centers and encouraged to undertake institutional delivery through various Government schemes. They also conduct a range of health camps in the community; ensuring quality professional healthcare is available. The camps include gynaecology, optometry and pediatric services.

4 people are currently supporting this.