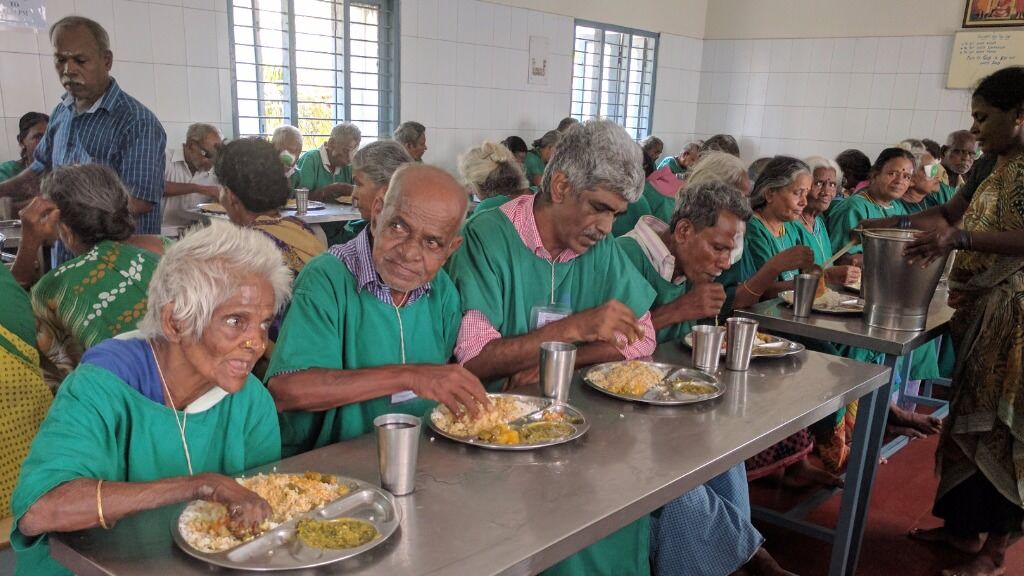 Sankara Eye Hospital conducts a free eye screening camp at Pattabiram. The patients were screened and 20 patients recommended for cataract surgery were referred to the hospital. Cataracts are completely treatable but if left untreated, the person becomes totally blind. But due to poverty, many patients live with blindness.

The hospital along with free surgery provided nutritious food for the two days that they stay in the hospital. They are provided with three hygienic, nutritious and qualitative meals a day. The 20 patients were taken care with free medicines, accommodation, food & nursing care. They were discharged with good post-op vision and are dropped back home.

The program covers free treatment, medicines, accommodation, food, nursing care as well as transport to and from their hometowns. Sankara Eye Hospital performs up to 50 free surgeries a day. Nutritious and qualitative food is very important for quick recovery of the patients. The hospital offers unlimited quantities of three meals and healthy beverages for the patients every day for the two days of stay. Special care is taken for diabetic patients.

The attendants that accompany the patients are also provided with free food while caring for them. When you donate to this program, you sponsor the food for the two days of hospitalization for ten patients and help with their recovery.

Sankara Eye Hospital is an ISO 9001 certified, state of the art multi-specialty eye hospital located at Pammal, a well-developed suburb of Chennai City.

This hospital runs a charitable eye care program for the poor under the name 'Kannoli Vision Saver' project. State-of-the-art outpatient facilities exist for examination of all eye disorders and a team of highly skilled Optometry technicians and Ophthalmologists provide personalized and professionally competent care. The three-storied hospital has 140 beds, 20 independent bath-attached rooms, and a modern hygienic kitchen to cater nutritious food for the patients.

The hospital has four sophisticated and fully equipped operation theaters and a team of very highly committed and talented staff apart from 12 senior eye surgeons. The hospital currently carries out an average of 60 surgeries every day and has performed over 250,000 vision-restoring surgeries till now.

This financial year beginning was a challenging one for all of us due to COVID 19 pandemic.

The Government has suspended the outreach eye screening camps from 24th March 2020 due to the COVID 19 pandemic.

Sri Kumar, S/o Sri Kullan aged 53 years resides at No.10, Second Street, Poompukar Nagar, Pammal, Chennai, Tamil Nadu. He is working as watchman in a leather company. He is the only earning member in his family consisting of two sisters and their kids who live with him. He is unmarried and has sacrificed his life for his sisters. They are living in a thatched house.

The routine health check-ups were done on 29th September and found to be fit for the surgery. He was admitted on the same day. Small Incision Cataract Surgery with Intra Ocular Lens in left eye was performed on 30th September 2020 successfully. He was provided with medicines, accommodation, food & nursing care during his stay, all absolutely free of cost. He was discharged on the next day with good post-operative vision. He underwent two reviews after surgery, the first at after one week and the final one after 30 days. His vision at the second review was 6/9.

Kumar is highly delighted to have his eye sight restored – that too totally free of cost. He is now confident and has rejoined his duty.

During the last few months, the Hospital has conducted 237 outreach camps and screened 13224 persons. The Hospital has performed 3464 free, 1425 paying, 754 subsidized cataract surgeries. The Hospital has also performed 307 specialty surgeries. Case study of Sri E Janarthanan – MRD No. 502908 Sri Janarthanan, S/o.Elumalai is 64 years of age and presently resides at No.Vinayagar Koil Street, Kalathumedu, Viruthampattu, Vellore District, Tamilnadu. He is a coolie (tree climber). For about 1½ years, he was suffering with poor vision. Last few months, it has developed to a matured cataract and that stopped him from going to job. Due to the non-affordability and the family situation, he chose the free Eye Screening Camp organized by Sankara Eye Hospital, Pammal on 06/02/2020 at Musaravakkam and he attended the camp. Upon testing his eyes, the Ophthalmologist informed him about the presence of hyper-mature cataract on his right eye and the need to undergo the surgery immediately. Based on his consent, he was brought to the hospital the same day along with other patients selected for the surgery. He underwent the general health check-up for physical fitness. The Small Incision Cataract Surgery with Intra Ocular Lens on Right Eye was performed on 7th February 2020, successfully. He was provided with medicines, accommodation, food & nursing care during his stay, all absolutely free of cost. He was discharged on the next day with good post-operative vision and dropped back home. The restoration of eye sight has brought new confidence. After the second follow up he started going for his work, as well managing the day-to-day activities. He is happy and thankful for the support received.

During their stay in the hospital, the nutritional needs are taken care to accommodate dietary restrictions for hypertensive and diabetic patients.

So far the hospital has performed over 2.75 lakhs surgeries of which over 90% of the patients are rural poor. The success of the Hospital in this endeavor could happen only because of the untiring support of the village volunteers.

We are happy to inform that the hospital has performed 5711 free cataract surgeries between April and September 2018.

Apart from the surgery, during their stay in the hospital, we take care of their nutrition needs. Many of the patients suffer from non-communicable diseases like hypertension, diabetes etc which need special dietary retrictions. We identify such patients with a unique dress colour and meals for such people are specially tailored for their condition. In the case of diabetics, even the tea served is without sugar. For all patients, the food served is of nutrional value with a healthy balance of vegetables, proteins and cereals.

Indumathi hails from Thiruvoor in Tiruvallur District - Tamilnadu. She is 42 years of age now. Her two daughters are school going children. Her husband is a night watchman in a private company. In order to supplement the family income, she had been working on the National MGNREGA projects which involved in filling of forms for the public. This could not be continued when her vision got impaired which had an impact on the family income.

Indumathi had been experiencing blurred vision for over six months and in view of the economic condition, she avoided visiting the hospital. When the problem aggravated, she attended the Free Eye Screening camp organized by Sankara Eye Hospital at Thiruvallur on 2nd May 2018. She came to know about the camp through her neighbour who got operated in Sankara Eye Hospital, Pammal. She attended the camp along with her husband. Her eyes were thoroughly examined and was diagnosed as having cataract in her right eye. She agreed to the suggestion of the Ophthalmologist to get it operated immediately and was taken to the base hospital at Pammal.

The surgery was performed after the routine health check-ups and the cataract removed on 3rd May 2018. She was under postoperative care for a day. On ascertaining her recovery, she was discharged from the hospital the next day with required counselling, medication and nutrition.

The restoration of sight has brought a huge change in her life. Now she is able to continue to engage herself as an earning member. She greatly appreciates the help provided to her through this eye care program.

Between Jan and July '18, a total of 5711 patients were admitted to the Hospital. On an average, each patient was provided one breakfast, one lunch and two dinners apart from four cups of tea. All meals provided are unlimited in quantity. Of the 5711 patients, 1304 were having pre-existing problems like diabetes, hypertension etc and were served with special diet at every meal.

Provide nutrition support to children with cancer by Cuddles Foundation

Help sick and destitute adults live with dignity by Sapna