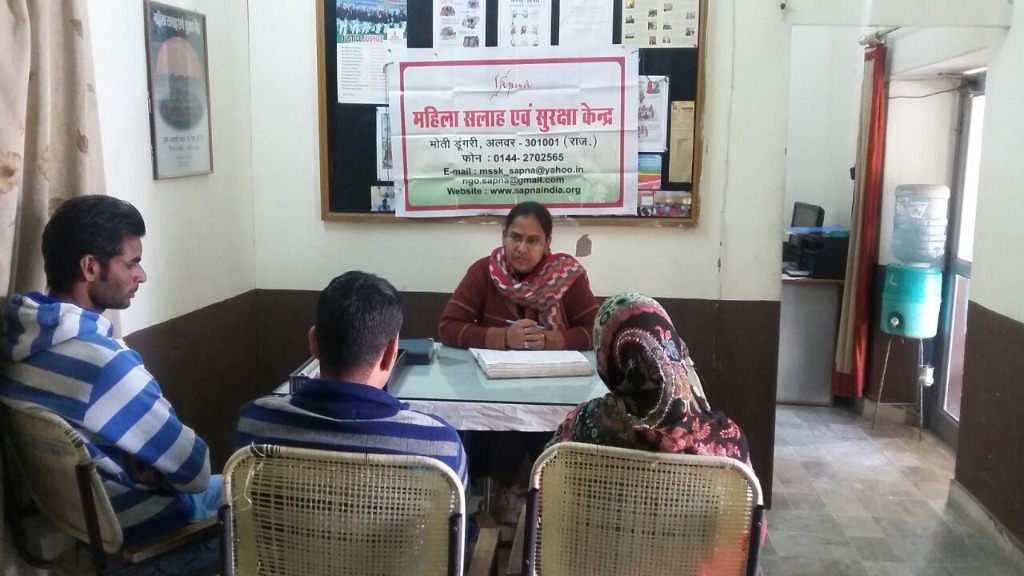 Empower women to be independent and safe

Jyoti and Rohit got married in 2003. Jyoti wanted to study further but Rohit did not allow her. They had a hard time together with *Jyoti becoming a victim of oppression by her husband and her in-laws. *

Rohit was unemployed for which Jyoti was being blamed by her in-laws. One day, they kicked out Rohit for not doing anything. Jyoti accompanied him considering it her duty as a wife to be with her husband in difficult times. The situation got worse for them, with Rohit being under a huge debt. Their relationship went for a toss with Rohit becoming violent and beating Jyoti often.

Jyoti was disheartened at her condition and wanted to improve things. She knew nothing will change unless she takes some bold steps. That was when she approached Mahila Suraksha Salah Kendra, Alwar and shared her situation. The NGO called her husband and his family to the center and held an individual as well as a joint meeting with both parties to facilitate a mediation.

Jyoti's husband held Jyoti responsible for his unemployment and stated that her mother and Jyoti always had altercations. He wanted to save his marriage and hence he left his house. Jyoti's father shared that Rohit didn't do anything for livelihood from the beginning, to which Rohit said that his father always wanted him to be a government officer but he wanted to be a businessman. That is why his father is always sulky with him. Jyoti expressed her decision of not wanting to go home either with Rohit or her parents. Rohit said that he would commit suicide if Jyoti leaves him. This made Jyoti go through a lot of mental stress and worry about her future. They were then sent to Swavlamban Pragatisheel Alpavas Grah, where they both agree to never enter into an argument and will agree to whatever the in-laws would say.

The center counselled them to take their own responsibility and look for a job. They also told them that the center is there to help if the couple needs it. Jyoti's father in-law promised the center to arrange a flat for the couple. On follow up, it has been found that Rohit and Jyoti will soon shift to their new flat. Rohit has also opened his own CCTV shop and the couple is now living independently. Your donation can help a woman take a bold step and improve her life. **You can donate with confidence because every program on our platform is GIVEASSURED.

Sapna runs multiple programmes in Alwar and Delhi. In Alwar, they have Mahila Surakshan Kendra. There are 2 counsellors, 1-2 constables (who accompany them for field/home visits) and help the women in distress. Once a woman comes to their office for help, she is informed about the process involved. If the woman agrees then the case is registered. A few sessions are planned for them where women share their problems and get counselling from the team. This is followed by a session with their husbands to listen to their perspective. If the husband refuses to come, they are summoned by the local police. Families are then involved to counsel the couple and bring them into agreement.

In cases of rape and divorce, they also guide the women around the legalities involved. In cases the women do not want to formally register the case, only their contact details are noted and counselling is provided to them. However, if the women come back, the team tries to convince them to register the case. They also guide them to the police station or a court if there is a crime involved. Once a case gets resolved/temporarily closed, they stay in touch with the beneficiary to check their well-being. At times, cases are also reopened and counselling continues.

Their other programs are Assistance and shelter to trauma patients at AIIMS and Safdarjung hospital in Delhi, home for the destitute in Alwar and Delhi, Computer training, school and after school programme for girls in Kaduki, Mahila Surakshan Kendra in Alwar. They also conduct outreach sessions on women rights, domestic violence, child sexual abuse etc. Workshops are conducted in schools also, in order to reach out to the young girls and making them aware of their rights. They also have tie ups with other NGOs (Ebtaba, Sangharsh, Savera Manch), with whom they conduct joint sessions for women.

Their office in Alwar is a part of a palace donated to them by a member of the royal family. It houses Sapna Shishalaya (school), Anandam (destitute home), Pankhuri (after school programme) and computer training centre. They also have a District Support Group (DSG) meeting where all the local NGOs meet to discuss on different schemes/aspects (employability, income generation schemes, legal aspects etc).

Sapna was created by a group of professionals who shared a dream to work on a people-centric model of development in areas of public health, education, women empowerment, community development and social welfare.

Inspired by Gandhian ideals of social change, their primary objective is to: Empower the poor and marginalized; Provide shelter to the sick and destitute; Promote community health programmes and services; Support literacy centers and e-learning; Facilitate livelihood programmes; Help the poor access information and resources; Work for environment protection and conservation. Their basic focus is to help those who are the most vulnerable and are in dire need of help.They believe that development has to be holistic to break the vicious cycle of poverty and wish to bring about visible change. They work by focusing energies in these sectors as well as building their understanding of the related issues.

They believe that any organization, or for that matter, any individual, whose fundamentals are based on the virtues of honesty, ownership towards our society and regard to human dignity, are bound to grow in the right direction and the last 10 years have been a testimony to this philosophy. 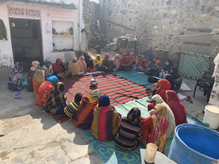 Challenges in carrying out operationsDomestic violence is widespread and deep-rooted in India and its ubiquity was highlighted prominently during the COVID-19 lockdown. In a country where every third woman faces some form of domestic violence, and 52% of women and 42% of men believe it is justified for a husband to hit his wife, there is a need for a long-term national strategy to combat violence.Even during lockdown Mahila Suraksha Evam Salah Kendra was functional. Coordinator with a team of counsellors and constables were in constant touch with the clients and their husbands through telephone as the follow-up and visit were not possible because of government restrictions.At the time of emergency, with special permission from WCD, we went to the houses of our clients and sorted out their differences. Clients were given the personal number of the counsellors so that they could be in touch with them,When the lockdown eased, we started visiting the houses of our clients to ensure that they are better. Many of the clients told us that because their husband didn’t have the access to liquor their life was much better!Plan for next 6 months• Workshop based on women issues• Conducting District Support Group meeting where N.G.Os working for women cause will be evolved• Networking with Police Departments• Networking with N.G.O.s working in and around Alwar• Running outreach programmes in and around Alwar District so more women know about the platform where their problems can be sorted out amicably.

Stories from the ground:Neha Choudhary w/o Raj (names changed) We received Parivaad from 181, therefore, contacted the girl. She picked up our call and spoke to us about her problem in detail. Counsellor told her to come to the centre as the problem cannot be sorted out by phone. After speaking to the girl, the counsellor called her husband and told him about our centre and the complaint which his wife has lodged through 181. He said that he will come on December 2, as he wanted the problem to be sorted out. On December 2, the parivaadi and her husband came to the centre. Counsellor first spoke to her husband. He told the counsellor that he works in some other town while his father works and stays in Agra. Neha stays with my mother in our village. Everything was going fine, and Neha never complained about any problem. He wants to keep Neha. Counsellor then called Neha and asked her to tell the problems. She told the counsellor that initially everything was going fine but after some time her mother-in-law started misbehaving with her. She started abusing Neha’s family. She doesn’t want to stay with her mother-in-law. She is ready to stay in Agra. Raj told the counsellor that Neha never discussed the problems, if she must have told him then he would have tried to solve it. Raj said she can't stay in Agra but as he has shifted back to his hometown, he will ensure that these problems don’t persist. Neha didn’t agree so the counsellor gave her time to think. After 2 days Neha called and she told us that she is ready to go back to her husband’s place and she will inform us when she goes. On December 8, we received the call from her father-in-law that they have brought Neha home. Counsellor asked the father-in-law to give the phone to Neha. Counsellor spoke to Neha and she said she is fine because her husband is staying with her. She will inform us if any problem reoccurs. 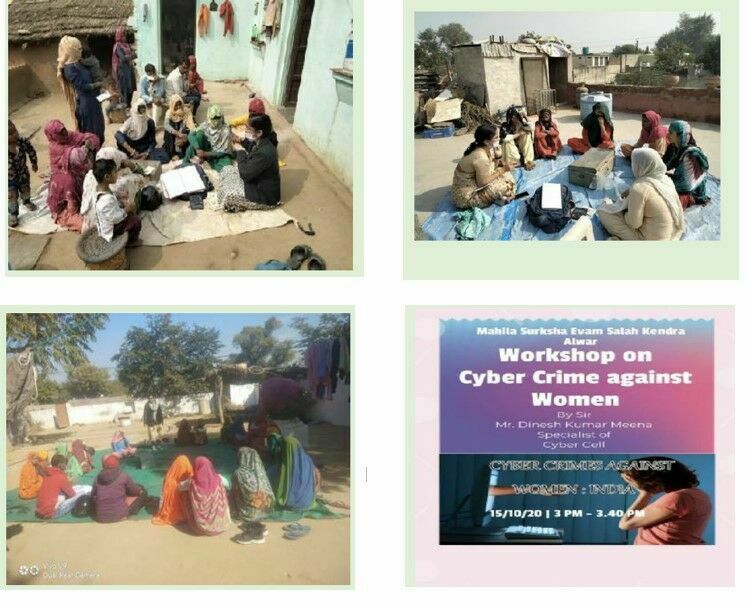 Since December 1, 2008, SAPNA is partnering with local police and Department of Women and Child in Alwar, Rajasthan to run a guidance and protection centre for women known as the Mahila Suraksha Evam Salah Kendra (MSSK). The MSSK is a holistic redressal centre for women providing support to women facing violence by way of:
• Assisting them to negotiate their way through the Criminal Justice System.
• Settling disputes through alternative dispute resolution mechanisms.
• Providing rehabilitation to women survivors of violence.
• Providing medical and legal aid, psycho-social support, shelter, economic rehabilitation, and any other relief required.

The concept underlying the centre is that of providing a comprehensive strategy of redressal for women who come to the centre for support. The single window assistance can range from mediation to legal aid, to intervention within the police system and the judiciary, to economic rehabilitation, to trauma counselling, to shelter and care.
The coordinator and team of social workers listens patiently to survivor’s problem. Every case is unique which requires different resolution strategy favoring survivor which probably leads to solution for survivor’s problem. Every strategy depends on the gravity and nature of grievance. Need of survivor and confidentiality are two main core values on which our work is based.

Confidentiality of each case is maintained as we understand that the victim is telling something which is very personal and close to her heart. Her trust has already been broken by the other party and she has mustered lot of courage to come to the centre.

Cybercrime, or computer-oriented crime, is a crime that involves a computer and a network. The computer, mobile or any other computing device may have been used in the commission of a crime, or it may be the target. Cybercrime may threaten a person, company or a nation's security and financial health.
Keeping in mind that cybercrime is a burning issue, Chief Coordinator of MSSK spoke to SP Ma’am and then went personally to meet her. As she was not there, she spoke to the Assistant Superintendent of Police Mr Bairwa and informed him that MSSK wanted to conduct a workshop on cybercrime. He readily agreed and said this topic really needs attention. He appointed Mr Dinesh Kumar, Cyber Cell Incharge, to conduct the workshop.