Help poor women get access to gynecology services by Apnalaya 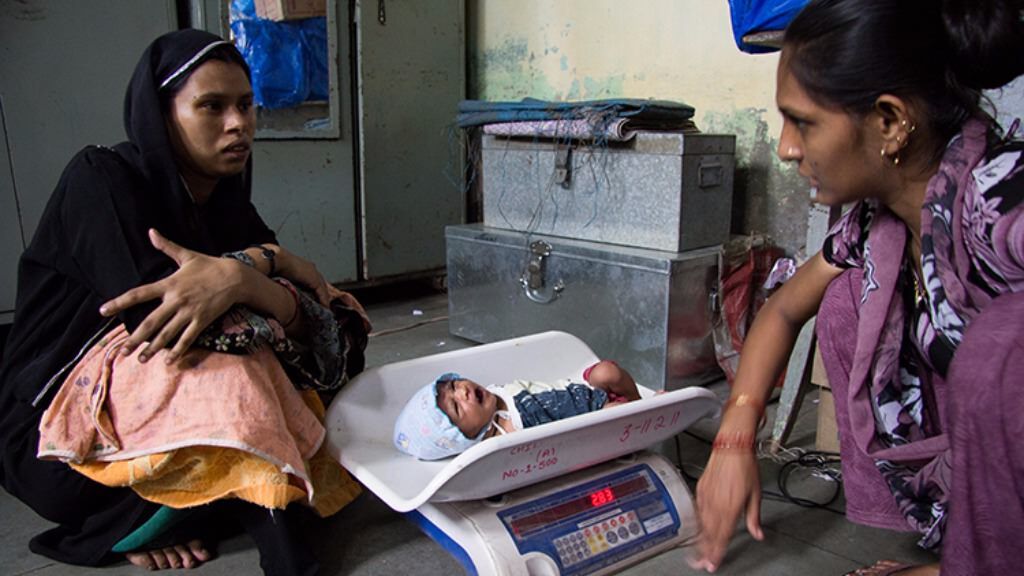 Ruby Shaikh lives in Chikhalwadi, Govandi. She has 3 children. With her husband being unemployed she was the sole breadwinner of the family. Ruby ran a takeaway lunch catering service for a living. She developed heavy vaginal discharge, abdominal pain and was frequently ill.

Societal taboo made her uncomfortable to seek help and she suffered in silence. She was also worried that if she was hospitalized she would lose her sustenance. During a regular home visit, an Apnalaya health worker met Ruby who confided about her problems. She was advised to come to the clinic. The doctor started her treatment.

Ruby regularly visited the Apnalaya Gynaecology clinic and completed her treatment course. She is now healthy and has resumed work completely.

Apnalaya runs an initiative to address the issue of maternal, newborn and child healthcare and nutrition in 8 slums in Shivaji Nagar, Govandi in the M/E ward of Mumbai Municipal Corporation. Government schemes and primary health care including maternal and reproductive health care services have been inadequate and ineffective.

There are no maternity homes or inpatient health care centers for a population of 6 lakh in Shivaji Nagar. 78% of the population in this area is living in slums and has the lowest life expectancy rate. Apnalaya works towards improving the maternal health care through its antenatal and gynecology clinics. These clinics provide healthcare to women who otherwise have no access to healthcare.

When you support this program, you help in the running cost of the expenses of the clinic and help women get access to basic healthcare.

Apnalaya is a secular voluntary organization, that has been building self-sustaining communities since 1973. It aims to empower the disadvantaged to overcome the social, political and economic barriers and help them lead a better quality of life. They work with the most marginalized people dwelling in the slums of Mumbai. There are 4,200 children under 6 years of age at the center of Apnalaya’s Health Program.

The Health and Disability related interventions emphasize on empowering community members to improve health seeking behavior and access healthcare instituted by government agencies. The Livelihood program equips young boys and girls, men and women to identify the potential of opportunities and turn them into economic productivity. They provide sewing classes, enroll and train women who otherwise have been under cultural restraints to stay away from income-generating activities.

209 women have economically benefited from Self Help groups organized by Apnalaya. The Education and citizenship program aims to bring together the volunteers from the community so that they have a better understanding of the challenges faced by their community and identify their responsibilities towards it. In 2017, Apnalaya was awarded the Champion Level- GuideStar India Platinum for highest levels of transparency and public accountability. 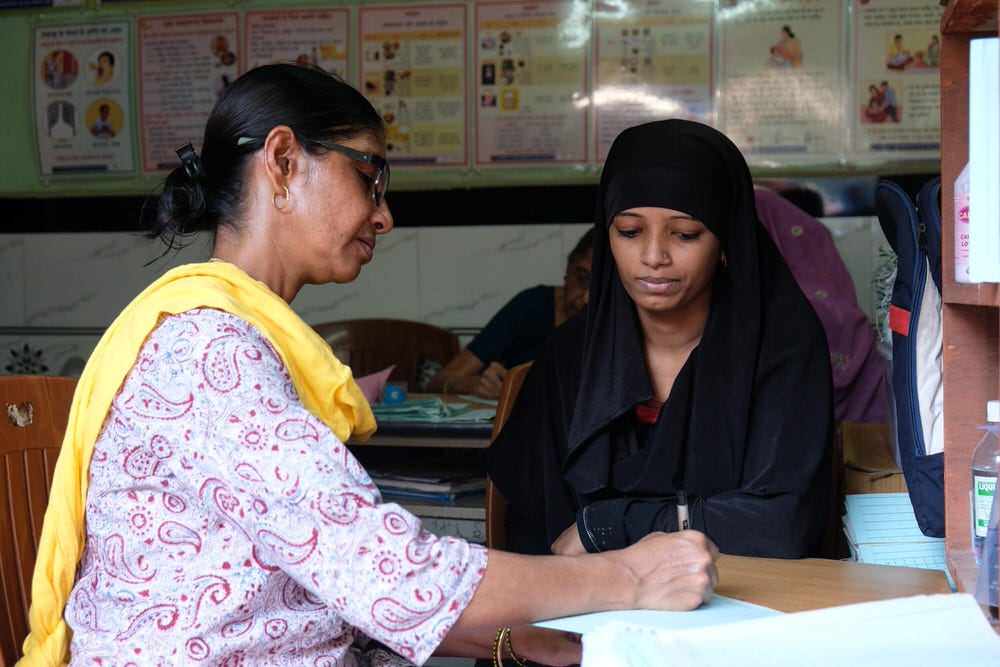 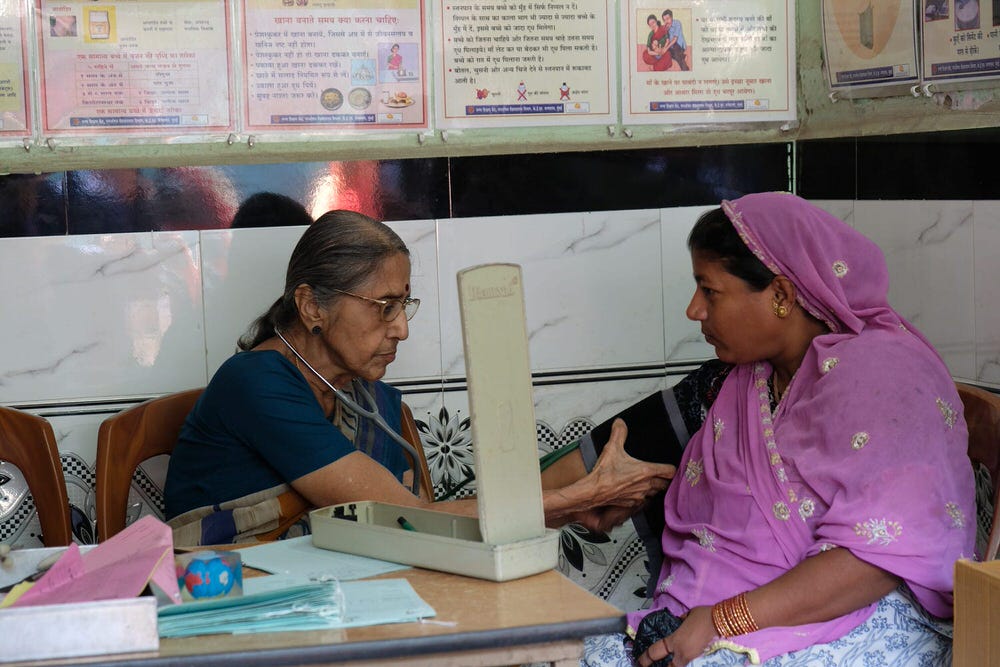 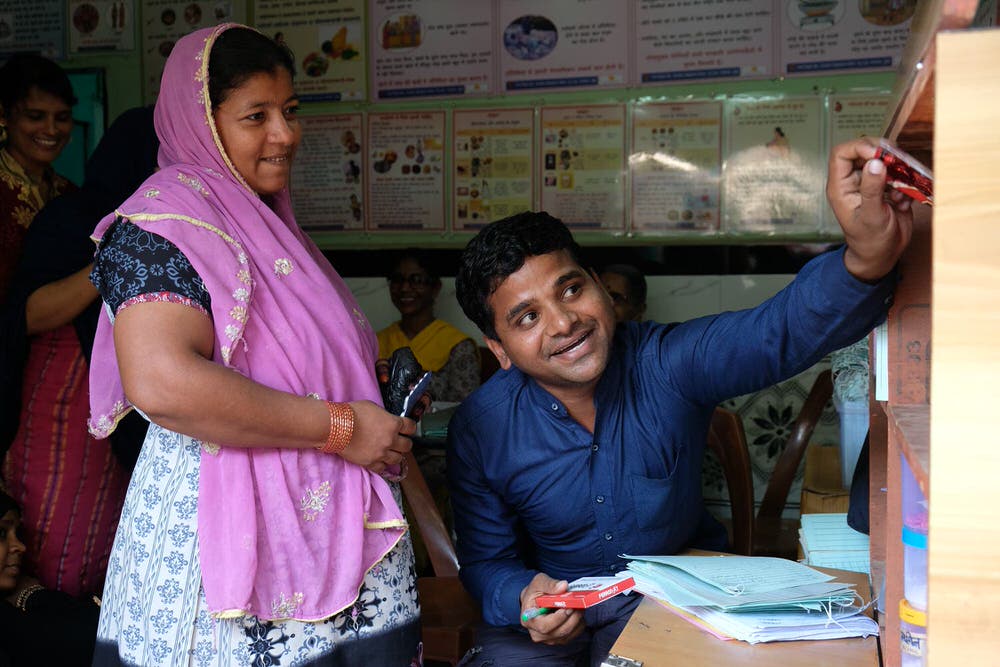 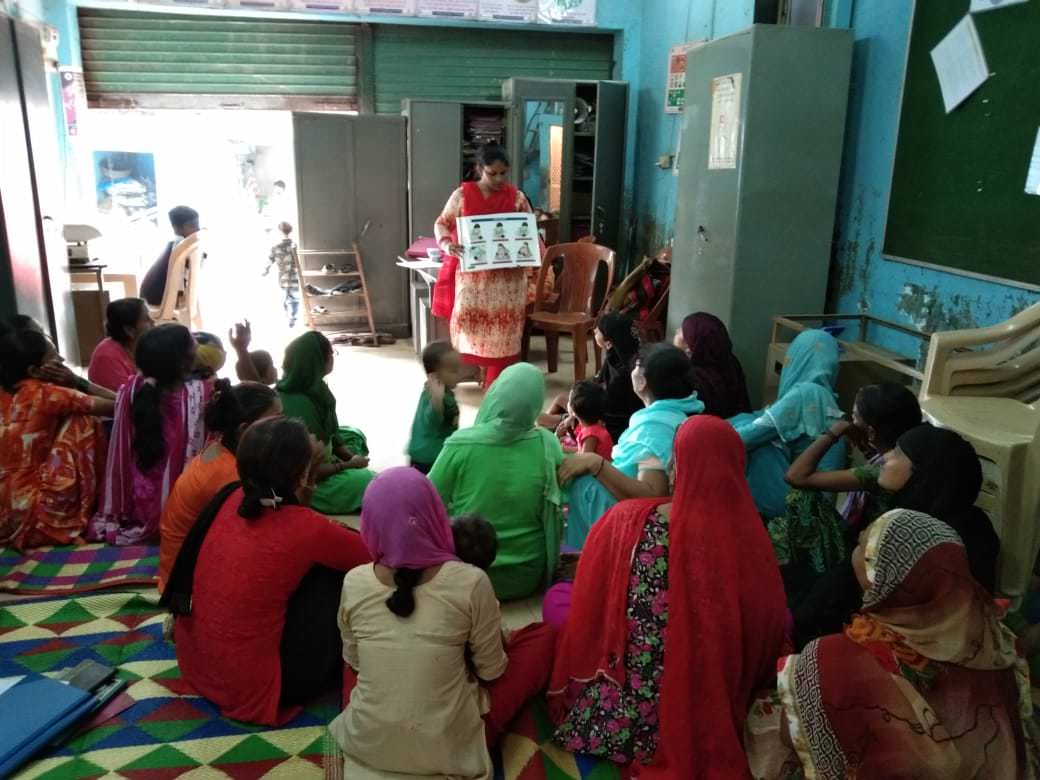 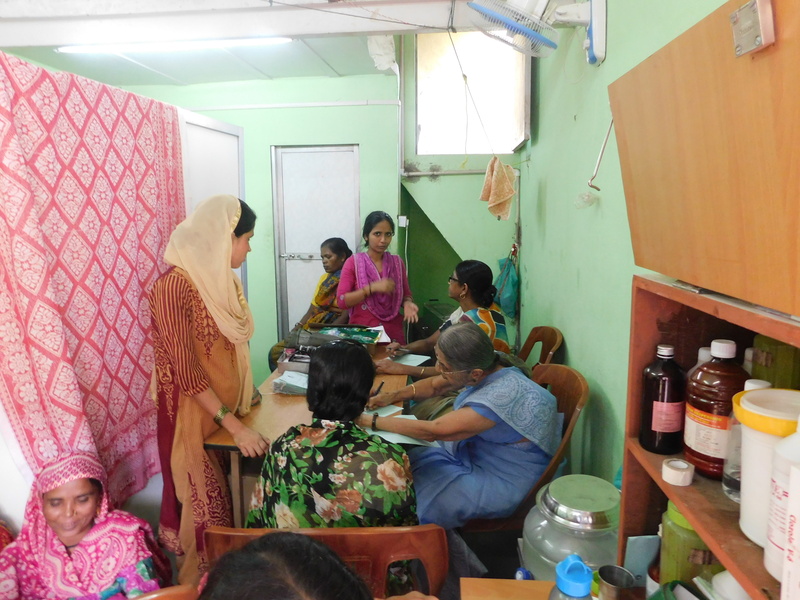 Consultant gynaecologists, Dr. Datye and Dr. Sharmishtha provide good quality treatment to the poor patients in the clinic. During clinic doctors not only provide the treatment, also provide the guidance on their healthy life style including nutrition and hygiene. Apnalaya provides medicine for one week to the patients and follows up through community health workers. Those cases refers to treatment from the clinic doctors’ advise them to come again for follow up with reports. This has led to a built up of a rapport within the community and the support which will ensure a strengthened community based management of issues.

Between Jan and March 2019, 24 ANC and Gynaec clinics consultations were conducted. 76 ANC (Pregnant women) and 298 women for Gynecological issues visited the clinic. Out of 298 cases 32% cases had menstrual health issues and white discharge. These patients were provided treatment along with counseling. Total 119 cases were referred to Government hospitals for further treatment. Total 4 sessions were conducted during the quarter covering 79 individuals. The topics of the session were - Family planning methods, Gynecological issues including white discharge, and nutrition.

Kanchan has been staying in Padma Nagar from the past 3 years. Her husband is an auto-rickshaw driver, and they have 3 children (2 daughters & 1 son). Kanchan is a housewife. She has been visiting the Apnalaya Clinic for the past 3 years, and is receiving regular medication from there. She came to the clinic because she experienced morning sickness and dizziness at the time of her second pregnancy. She eventually started feeling a lot better with the medicines. She then registered herself at Rajawadi Hospital, and said that the doctor there was very helpful. The doctor assisted her with family planning, which was quite helpful for her. She started feeling better on taking the medicines at the clinic, and while she was receiving medicines from there, she also continued following up at Rajawadi Hospital regularly. Her delivery went by smoothly as well. She was also of the view that Apnalaya doctor speaks is very humble way, and explains things patiently. She mentioned that before visiting the clinic, she had a lot of gynaec-related issues like white discharge, but the moment she started meeting the doctors at the clinic, the issues came under control. Kanchan now takes all the people whoever needs help at the clinic, and gives them information about what are the things that are done at the clinic, and how are they effective. 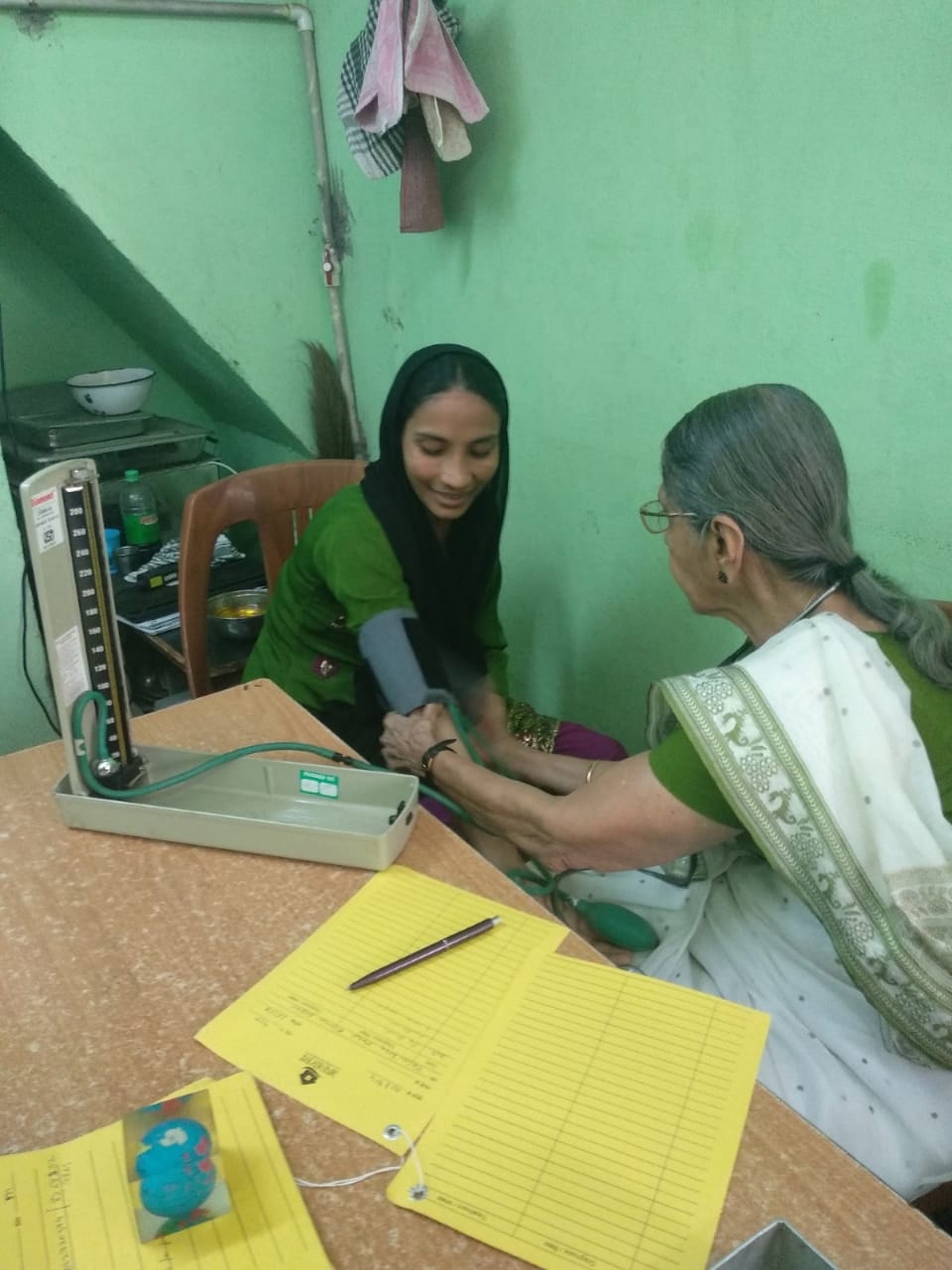 The Ante Natal Care and Gynaecology clinic is open twice every week, on Tuesdays and Fridays in Padma Nagar, a slum settlement on the edge of Deonar dumping ground in Shivaji Nagar, Govandi, in north east Mumbai. About 7-8 family members stay in matchbox-like shanties of 10X15 feet, surrounded by 9.2 million tons of garbage dunes. Almost every public utility service is denied - Housing, Rations, and Water - to name a few. Not only is a quality life denied, but consequently, life itself is denied - with the average age of death being 39.30 years. The predominant livelihood is rag-picking and recycling of waste. Apnalaya partners with local communities and works on issues like education, health, disability, livelihood and citizenship. The severity of the conditions in Shivaji Nagar stands at a tall note and thus the need of a clinic or a nutrition counselling becomes a priority for the people living in the 12 clusters of Shivaji Nagar. In the wake of such a condition, Apnalaya provides medicines and advice from a consultant gynaecologist who comes in every 2 days of the week to all the women attending the clinic from the adjoining areas too. This has led to a built up of a rapport within the community and the support which will ensure a strengthened community based management of issues.

Soleha Ansari has lived with her family in Padmanagar from last 5 years. Her family includes 5 people, 3 children and Soleha and her husband lives in a rented house. Since her huband is the only one member who works in Garment factory as labour, taking care of house hold expenses is very difficult and there is always shortage of money and often changes a house.

Solheha has been taking medicines from the hospital for 8 years. When Soleha was pregnant with her third child, she followed the advice given by the doctor and was regular in the clinic.

She had registered her name in the government hospital but due to lack of money, she was taking medicines from Apnalay Clinic.

According to Soleha when she was taking her one child to private clinic, she used to spend more money on consulatation and also they used prescribe medicines from outside, but since she started taking medicines from Apnalaya Clinic she is able to take care of her three children health related expense in half of the money she used to spent earlier on her one child. She also likes the advice and treatment given at Apnalaya Clinic doctor. As a result when she given birth to her third child, she decided to go for birth control.

Solihaha thinks that the apnalaya clinic is very useful for poor and poor people in the area.

Soleha's story Soleha Ansari had been living with her family in Padmanagar for the past 5 years with her husband and three children. Since her husband is the only one member who works (in Garment factory as labour), taking care of household expenses is very difficult and there is always shortage of money. Soleha has been taking medicines from the hospital for 8 years. When Soleha was pregnant with her third child, she followed the advice given by the doctor and was regular in the clinic. She had registered her name in the government hospital but due to lack of money, she was taking medicines from Apnalaya Clinic. According to Soleha when she was taking her child to private clinic, she used to spend more money on consultation. They also used to prescribe medicines from outside, but since she started taking medicines from Apnalaya Clinic she is able to take care of her three children's health related expenses in half of the money she used to spend earlier on a single child. She also likes the advice and treatment given at Apnalaya Clinic by the doctor. As a result when she gave birth to her third child, she decided to go for birth control. Soleha thinks that the Apnalaya clinic is very useful for the poor people in the area.

1057 people are currently supporting this.