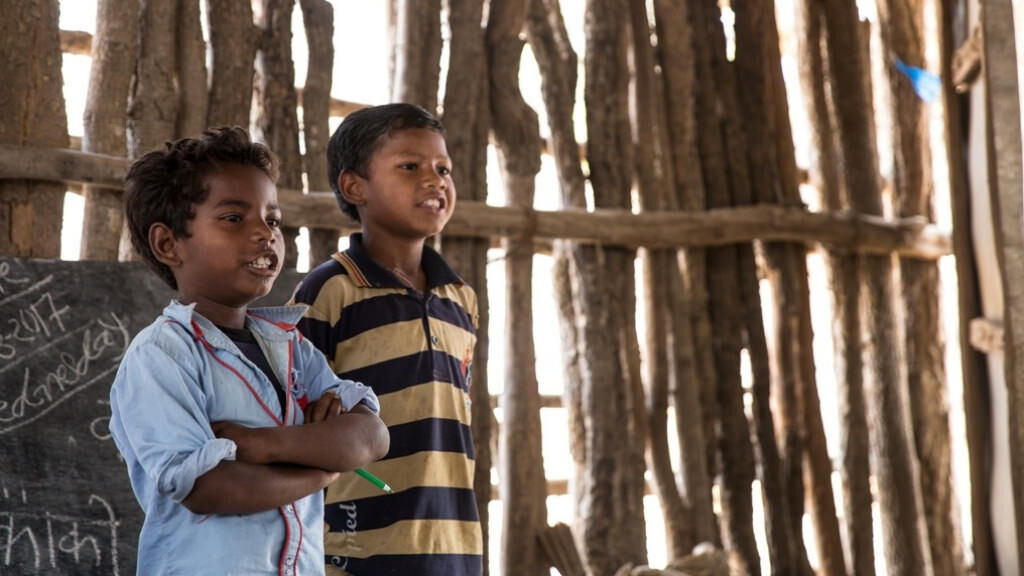 Anand lives with his family in the Mangla, a small forest village in Karnataka. Both his parents work as daily wage farm laborers.

In spite of their bad financial condition, they send Anand to school hoping for a better future.

Anand's father and his uncle were in a dispute about the ownership of their ancestral land. This land fell in the Tiger reserve area. Due to this, the state has restricted the agricultural activity in the area. This led to further tensions. On one unfortunate day, the brothers resorted to physical violence. In this confusion, Anand's father was jailed for 2 and half months. He was later released when found not guilty.

Anand however was badly affected by his father's imprisonment. He dropped out of school in the middle of class 10.

It was then that the Bal Panchayat and the Community Social worker of Bal Mitra Gram visited his home. They counselled the family about the importance of the education. They motivated him to go back to school. They also encouraged him to work towards making a change about issues that affect his school and community.

This resulted in a great change in Anand's behavior. He returned to school. He become the Bal Panchayat Vice President of his Bal Mitra Gram (BMG).

To combat this, Anand wrote a letter to the Gram Panchayat for effective implementation of National Rural Employment Guarantee Scheme (NREGA) with the guidance of a social worker.

He also wrote to the Panchayat Development Officer for timely release of funds.

This brought results and the retention rate of children in school rose up.

Anand is not only a brilliant student but also a good volleyball player. He aspires to become a police officer. He hopes to use his power and authority to voice out the injustice and bring a positive change in his community.

Anand, for sure would have been a lost cause without the guidance of KSCF's Bal Mitra Gram.

Your help can make many more children like Anand find their inherent talents. You can donate so that the foundation can provide Bal Mitra Gram services in many more villages and help many children become contributing members of a the society. You can give with confidence because every program listed is GIVEASSURED.

Bal Mitra Gram (BMG) model is essentially a preventive and curative strategy aimed at eliminating the violations of child rights.

It works towards resolving children's issues by empowering them and facilitating village development as a whole. It is a comprehensive approach towards sustainable development as it encapsulates the mobilization and empowerment of the entire village by ensuring participation of children and the community.

The objective of a BMG is to proactively guide the process of empowerment over 3 years of time period until it becomes self-sustainable on resolving children's issues and facilitating rural development.

During this process, all the different groups of children, youth, women, elders, influencers and elected village council officials start listening to each other, start respecting each other, start recognizing the critical issues which hampers the progress of marginalized communities in the village.

Gender equality is at the core of functioning of Bal Panchayat. Under Right to Education Act, 2009 every child has the right to free and compulsory education of eight years from the age of 6 years to 14 years. BMG envisions a process where all children below the age of 14 years are withdrawn from work and subsequently enrolled in school, learning outcomes enhanced through remedial classes.

The uniqueness of the BMG initiative lies in active participation of the village children in creating a legitimate democratic space for themselves in Panchayats, communities, schools and families.

BMG works for child rights at the grassroots level. It works towards solving the deep rooted problem of child labour and creating a demand and value for good education as a village pride.

It addresses issues pertaining to children's rights like eradication of child labour, missing children, child trafficking, child marriage and enforcing the right to education. BMG also empowers the communities to collectively demand and pressurize the local government institutions to facilitate the smooth access to their entitlements.

It facilitates the communities to collectively solve many other issues like maternal and child health, gender equality, rainwater harvesting, re-afforestation, safe drinking water, sanitation etc. through leverage the benefit from existing government schemes.

Currently BMG has 16 years?of experience implementing in 6 States Bihar, Jharkhand, Karnataka, Madhya Pradesh, Rajasthan and Uttar Pradesh in India. A total of 570 BMG's have been established out of which 137 are active in April 2018. BMG program has directly reached to over 200000 children through its activities.

When you donate to this program, you help Kailash Satyarthi Children's Foundation help the underprivileged children and youth. Your donation can help these children make a better life for themselves and well as for their villages.

The Kailash Satyarthi Children’s Foundation (KSCF) was established in 2004 under the leadership of Nobel Peace Laureate, Kailash Satyarthi to create a world which is worth living in for a child. A world where every child is free, lives a life of dignity, has access to health and education, and the opportunity to realize her or his potential.

The goal of the foundation is to end all violence against and exploitation of children by ensuring child protection through innovations, research, awareness generation, promoting partnerships and participation.

Towards this, KSCF is scaling Mr. Satyarthi’s committed work of almost four decades at both the grassroots and global policy level.

Ensuring education in the times of pandemic 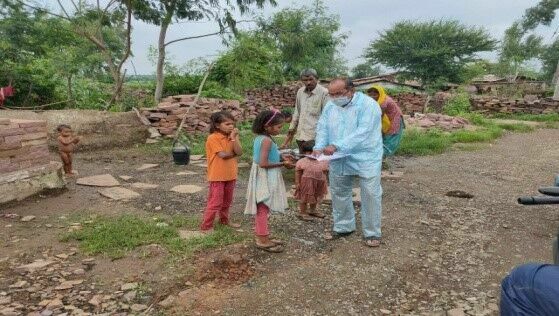 The influencers and shapers of our community

The influencers and shapers of our community 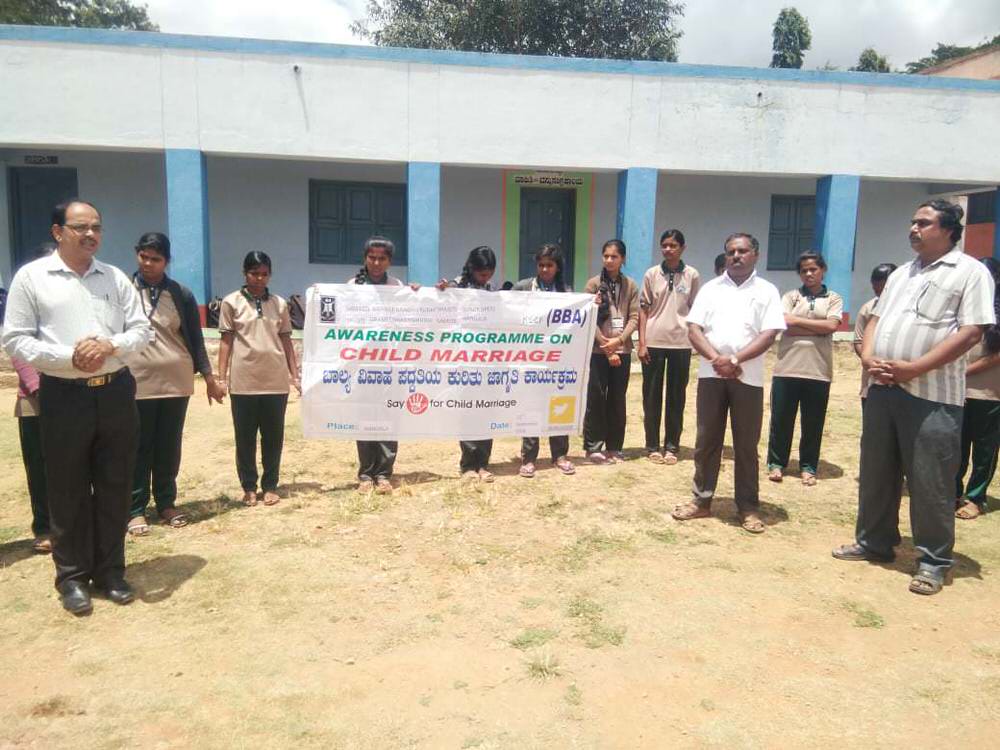 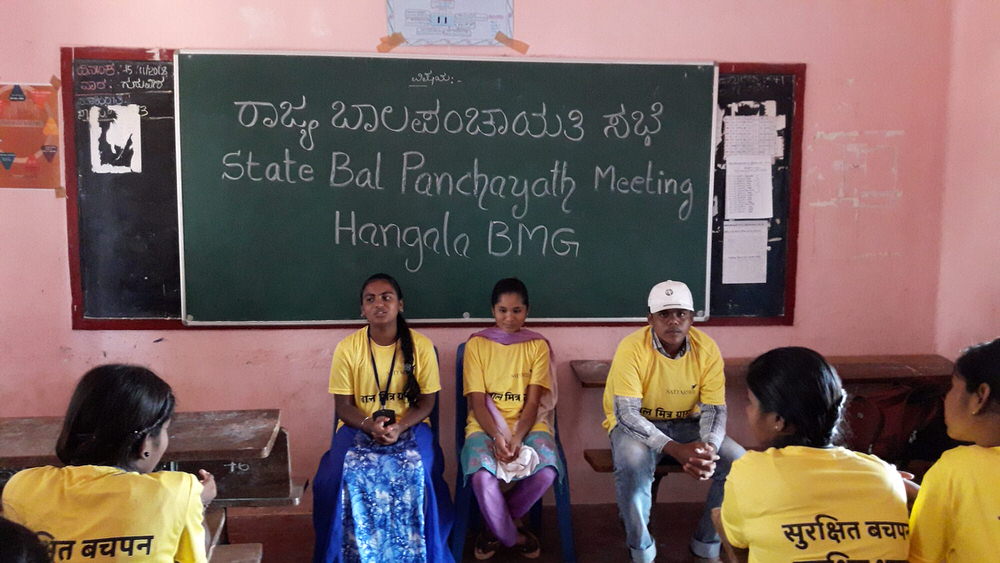 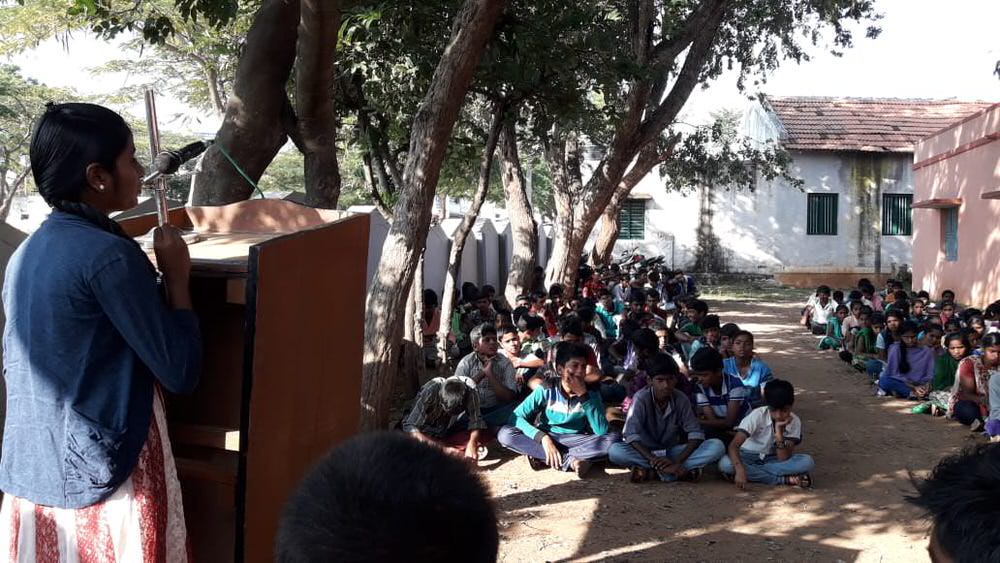 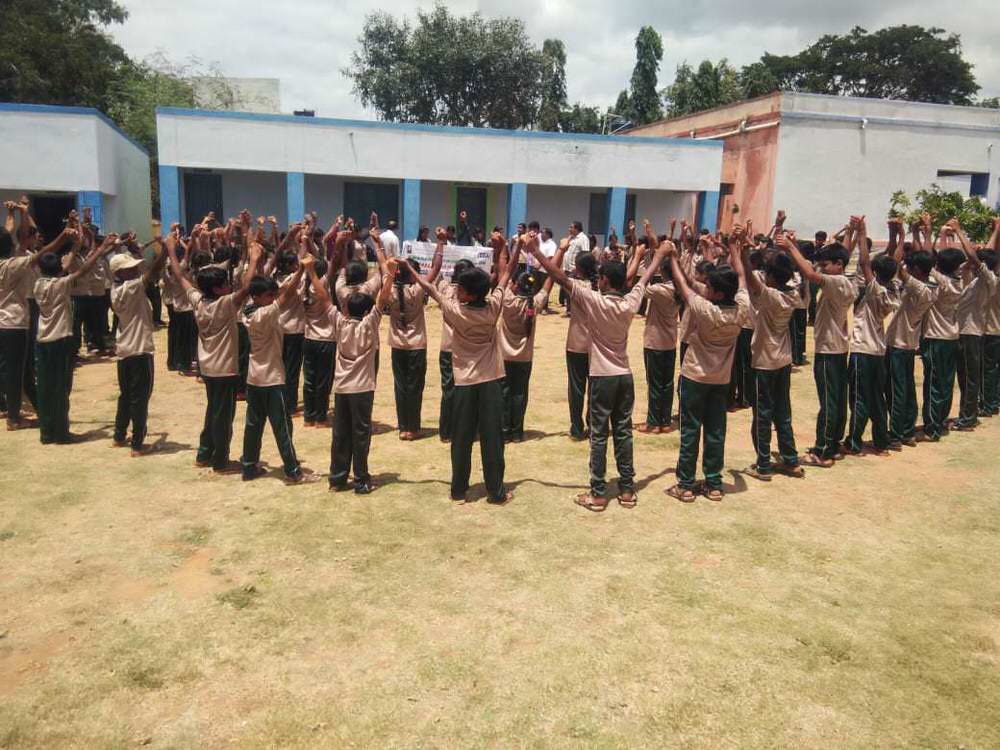 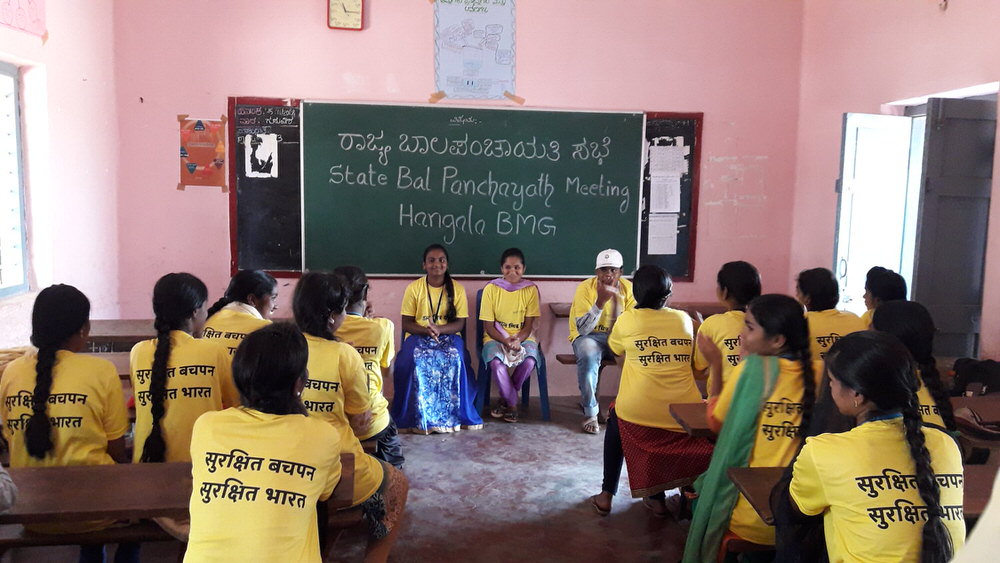 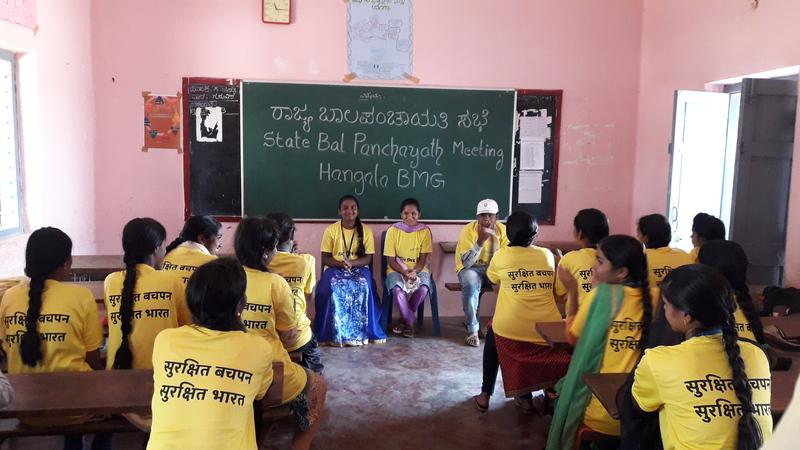 The BMGTM programme is a preventive and curative strategy to secure children’s right through the formation of democratic institution called Bal Panchayat which serve as a vigilant group in identifying issues of children. Different activities are conducted to meet the vision and goal of the programme: 1.Monthly meeting: Formed stakeholder groups(Youth/Women/B.P) meet once in a month to discuss children/community issues and set an accountability to address such issues. 2.Sports Activity: Inter BMGTM sports competition and activities were conducted in which 200 youth/children participated. 3.Awareness generation: Rallies and events were organised to create awareness about different child issues and on different thematic issues. A human chain was formed against child trafficking by the children of BMGTMs. Next quarter Plan: 1.Awareness Rally on Anti Child Marriage. 2.School enrollment drives. 3.Monthly meeting of stakeholder groups.

Pavana, is one of the member of National level Bal Panchayat who initiated a state level Bal Panchayat meeting with 11 children from Bal Mitra Grams. The agenda of the meeting is to encourage the members to participate in the Special Children’s Parliament organised by the Government of Karnataka. Also to raise issues of children in front of the Chief Minister. Pavana discussed about democratic values and came up with major issue like forced migration due to which children get dropped out of school. Due to the meeting and discussion Suchitra who is a member of State Level Bal Panchayat member represented and voiced out concerns in front of Chief Minister (CM) in Bangalore. She raised concerns about forced migration, which results in many children dropping out of school. The CM acknowledging Suchitra’s concern assured that he will circulate a notice to all the Panchayats in the state, stressing upon the importance of MNREGA and ask parents to find employment in their own villages. The child leadership and participation is one of the core component of BMG which have its ripple effect due to which children participate and encourage everyone to voice out their issues at a larger scale.