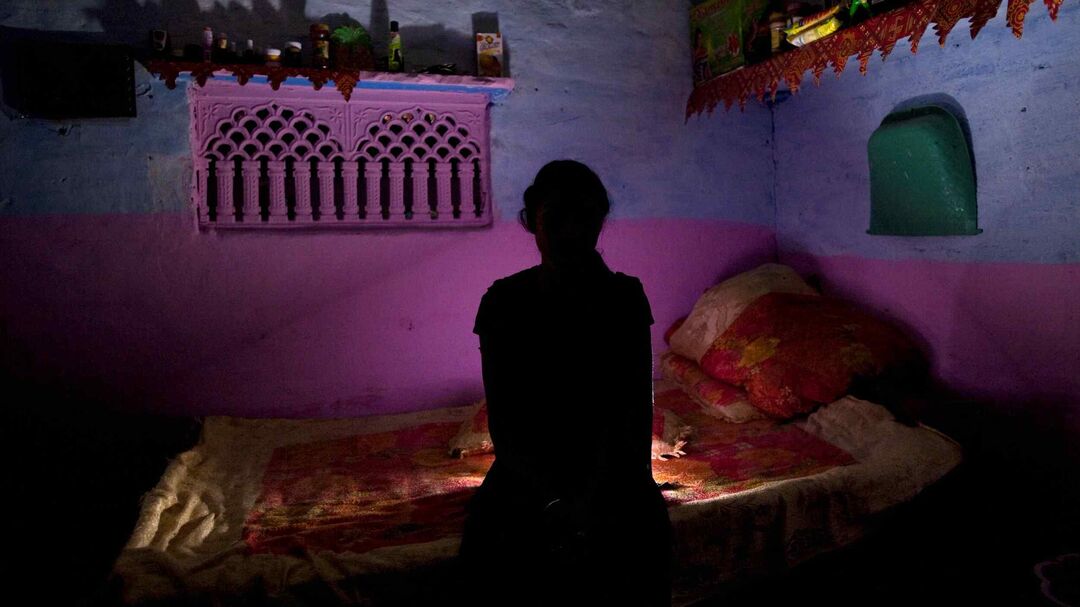 Bhagyashree fights to provide her children a better future

Bhagyashree had a hard life from childhood. She was born into a very poor family. Her education was discontinued as her parents couldn't afford it. She stopped going to school and started helping with family chores from a really young age. She grew up hoping that one day she would marry someone who would care for her and they would live happily. It was with these hopes she got married.

Unfortunately, reality was much different. Her dreams were shattered when her husband started to beat her regularly. Not only did he abuse her regularly, he also regularly cheated on her with other women. All the abuse could not break Bhagyashree's spirit

While Bhagyashree put up with all the torture, she had her breaking point when he refused to take responsibility of their children

She was a fighter and decided to break out of the abusive relationship. She mustered all her courage and broke free from the ties of her marriage from her violent husband.

She then decided to rebuild her life towards a better future.

Bhagyashree contacted Gauravi, the one-stop crisis centre for women, run as a collaborative project by the Government of Madhya Pradesh and ActionAid India.

Gauravi is a pioneer organisation which helps women not only fight for justice but also helps them regain strength to start afresh.

Gauravi helped Bhagyashree turn her life around. She began training in fashion designing and became very good at it.

Bhagyashree now owns a boutique that she built with her hard work. Confident and independent, she is happy and is successfully sending her children to school.

*You can help this program by donating to cost of the counselling and operations of the shelter homes. You can give with confidence because every program on our platform is GIVEASSURED. Give now and help a victim of abuse fight for justice. *

Action Aid through Gauravi provides support to victims of sexual and domestic abuse. Gauravi is the 24X7 one-stop crisis center of ActionAid.

The center caters to domestic and sexual violence victims of any age, as well as minor boys under POCSO Act. The victims are provided with counseling, intervention, legal help, medical help, shelter home as well as social rehabilitation.

The center is set up in a Government hospital as it is easier for a woman to approach it than a police station. Cases are received through a helpline on a phone.

A friendly atmosphere is provided so that the victim can talk openly without fear. Sometimes, counseling is also done over the phone at times. The center makes sure that confidentiality is maintained. Medical check up is the first action taken for any victim.

Counseling is done with dignity for every individual. They are not forced to take immediate legal action and are encouraged to explore other options that may be available. Meetings with family, in-laws or parents are conducted to understand if remedial actions can be taken. In case remedial actions do not work out police complaints are made.

The program also runs shelter home. The home offer shelter for victims for a limited time. Women who need permanent or longer duration shelter are shifted to Swadhar affiliated homes.

For domestic violence cases, counseling is done and then 'Moot' courts are conducted with the family to understand the court proceedings. In severe cases, legal aid is provided free of cost. Cases are taken to court after the internal committee makes the decision.

Donations to this program will support the centers of Bhopal, Lucknow and Guwahati.

ActionAid India is part of a global federation and a full affiliate of ActionAid International that has presence in over 40 countries worldwide.

Since 1972, the poor and the excluded have been at the centre of their programs in India. In 2006, they got registered as an Indian organisation called ActionAid Association.

They are primarily a human rights organization. They work for the rights of disadvantaged women and children ensuring that they have good means of livelihood. ActionAid has empowered its women to take up roles in the society which till now were dominated by males, such as truck drivers, cab drivers etc.

After a public hearing of a rape case in Gwalior, ActionAid set up the crisis centre in Bhopal. Gauravi is the first of its kind in India with the help of the Department of Health In 2014 to provide rights to victims of domestic and sexual abuse, belonging to vulnerable community chiefly.

There are 22 Gauravi centres across the country - 3 in Madhya Pradesh, 17 in Uttar Pradesh and the most recent ones started in 2017 in Manipur and in Tuticorin. Till now, 40,000 cases have been registered in the centers.

The cases that are looked into are: rape, domestic violence, molestation, minor cases, witch branding, victims of trafficking, women with mental illness, destitute women, and male or minor male victims of sexual harassment. 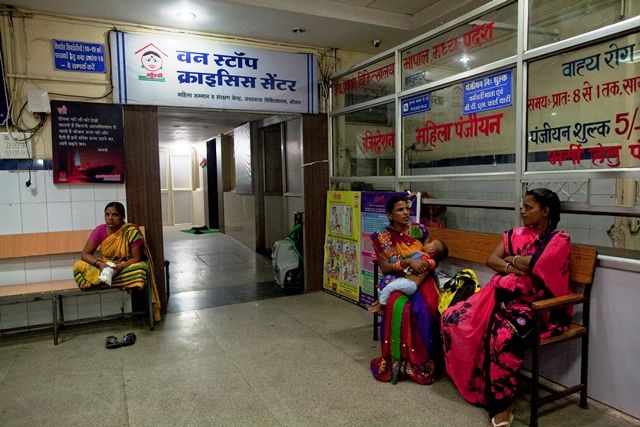 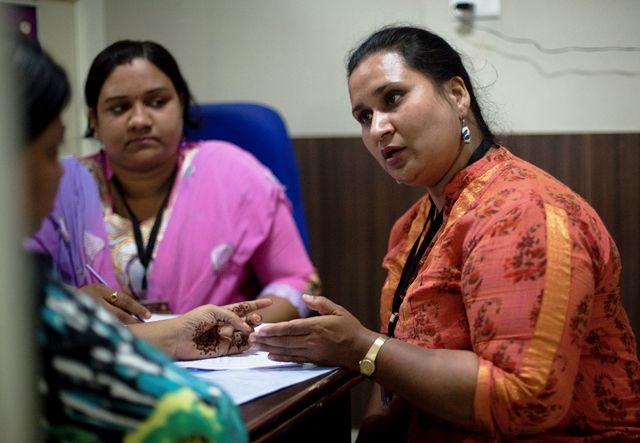 The number of incidents of rape, dowry and molestation have increased here since many people have walked into Gauravi (OSCC) straight and many have been referred by the police stations. Case Analysis: • 73% of women and girls given temporary shelter in Gauravi (OSCC). 93% of them are rehabilitated in their families. Rest are referred for permanent shelter in WCD supported Shelter home and Girl’s Home (Nehru Nagar). • 220 women are linked with the skill development program. Among them, many are working in reputed firms. • 32 young girls reached to centre after facing a violent rash of their family members for taking the decision of marrying the groom of their choice. They were given shelter and after counselling with family, married to the groom of their choice. All are living happily. • 42 young girls abandoned or left home after dispute with family members, rehabilitated in their family. • 120 women with psychiatric problems were rehabilitated in their family and 12 women were sent for proper treatment to mental asylum located in Gwalior. Visitors: Mr. Ashish Srivastav, Joint Secretary and Mr. Rabindra Panwar, Secretary, GOI (Ministry of Women & Child Development) visited centre and interacted with women survivors for becoming self-reliant. Team members from British High Commission, Unicef, US consulate, UN, Action Aid international & ActionAid Delhi, GOI and US Embassy also appreciated the work done by Gauravi. Apart from above, a team of aspiring trainee judges, trainee Women and Child Welfare Joint Directors, trainee ADMs, IAS officers, Police Department officials etc also come to understand the work and services provided by Gauravi (OSCC). State Minister (WCD) Mrs. Imarti Devi also visited centre and appreciated the work. She also ordered for expanding the building of OSCC and continued support to the centre and its role. • Capacity Building Trainings of Women Survivors: Continuing last year’s initiative of rehabilitating women survivors with Government run schemes and training program, many women were provided information as well as linked with training programs in Jan-Feb-Mar 2020. In these training programs, women survivors’ are imparted with skill development training as per their interest; Data entry operator, computer basic learning program, stitching program and Beauty & grooming program. Many women are working after pursuing these training programs and some are working as apprentice. In this practice of making women survivors’ independent, 12 survivors’ were provided e-rickshaw driving training. State Minister Mr. P. C. Sharma handed over e-rickshaw keys to these women driver. • One Billion Rising Campaign: On 13th Febraury 2020 one day public hearing on issue of VAW was organized for celebrating One Bilion Rising. Public Hearing program was held in Gandhi Bhawan, Bhopal. Program was divided in two parts. Mrs. Sarika Sinha, Action Aider gave speech in context of OBRs and situation of women in MP. After this she welcomed women survivors’ to share their stories. A cultural event was also organized to celebrate women courage. Many special guests from Police Department, Women and Child Development Department and Independent social workers chaired the public hearing. In this event, rehabilitated women survivors’ also shared their experiences of fighting their cases. 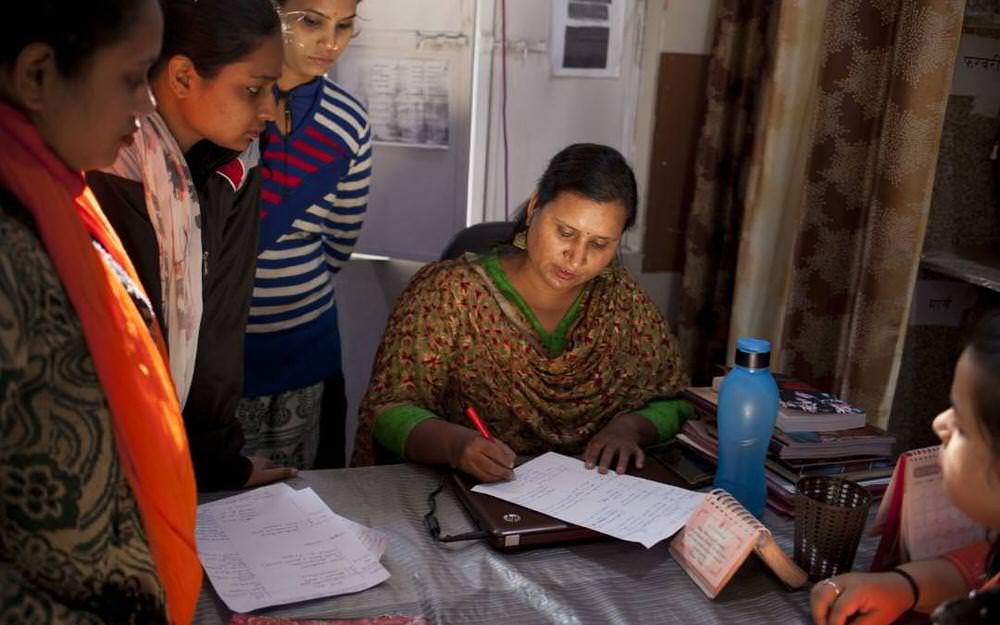 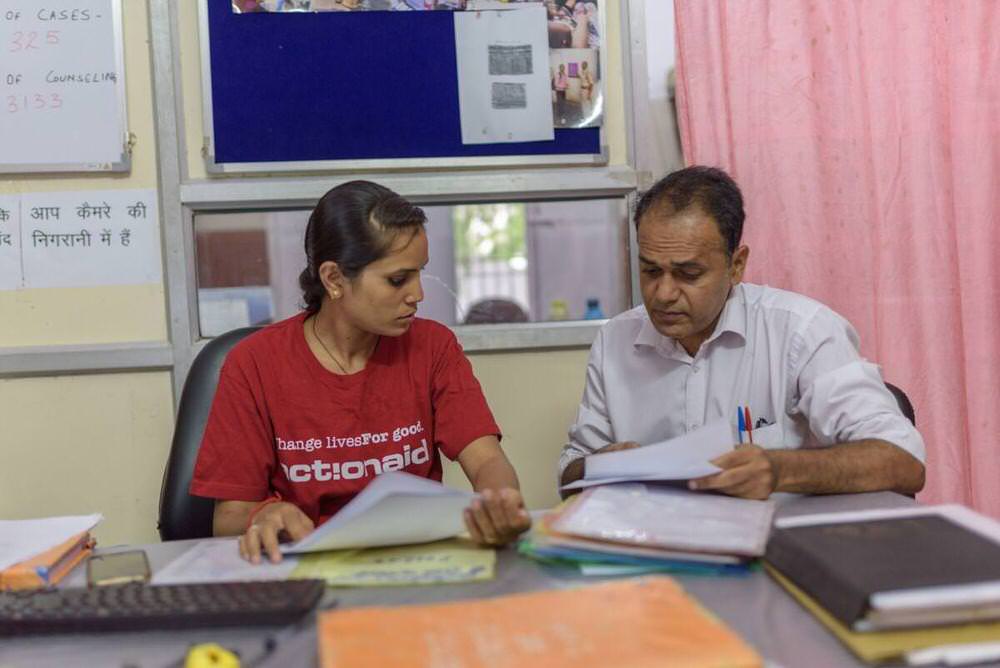 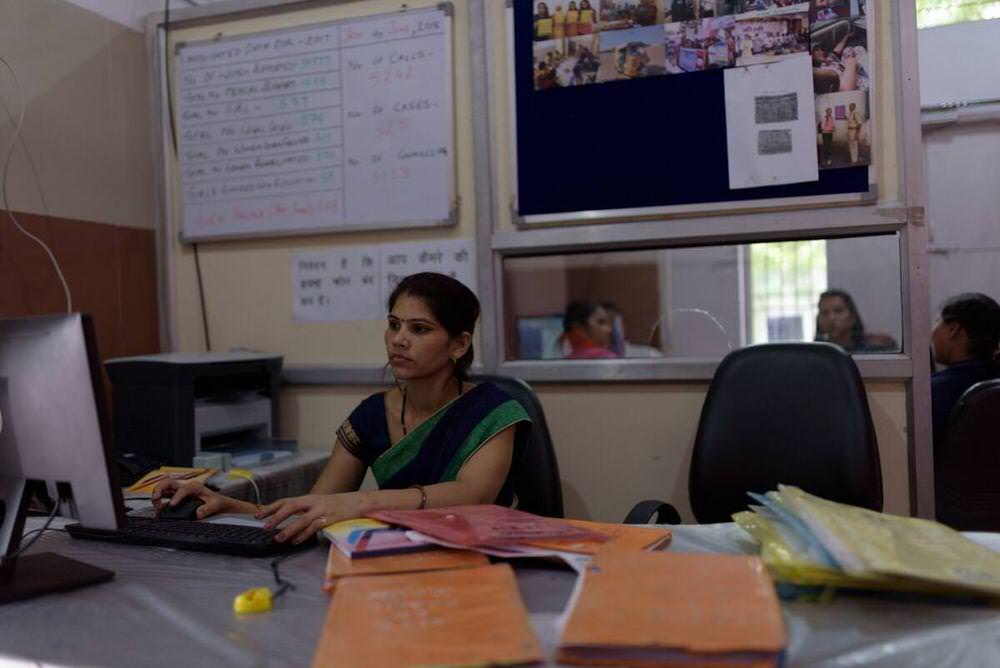 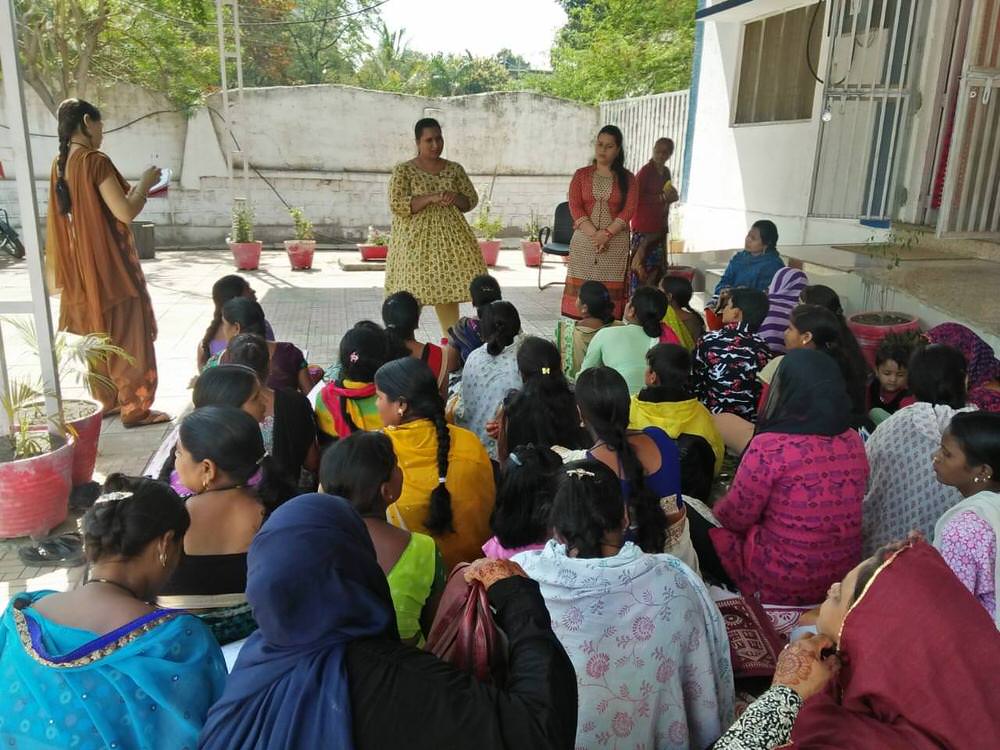 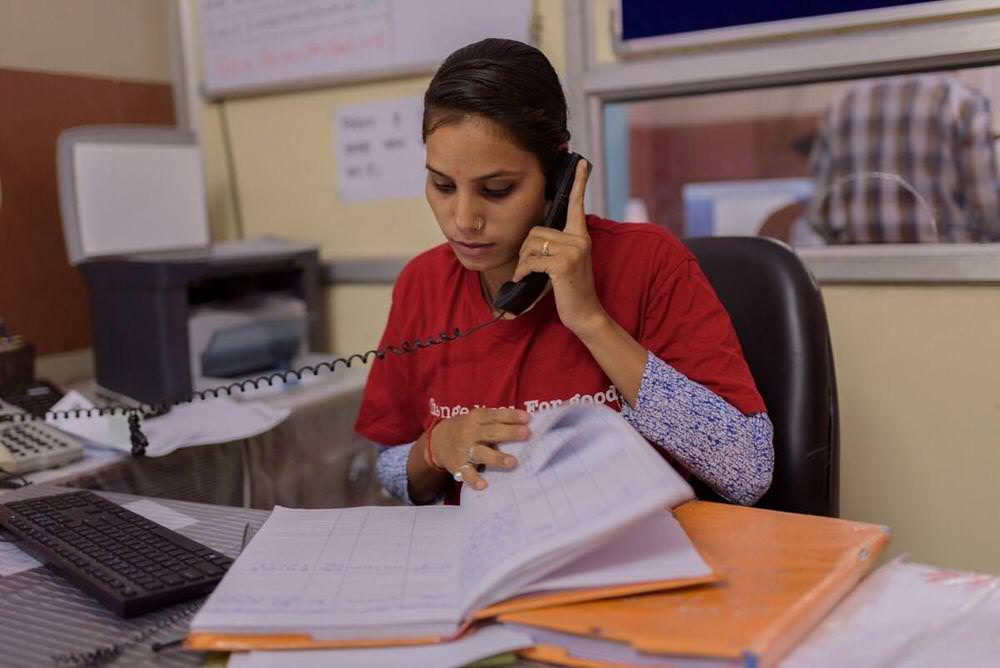 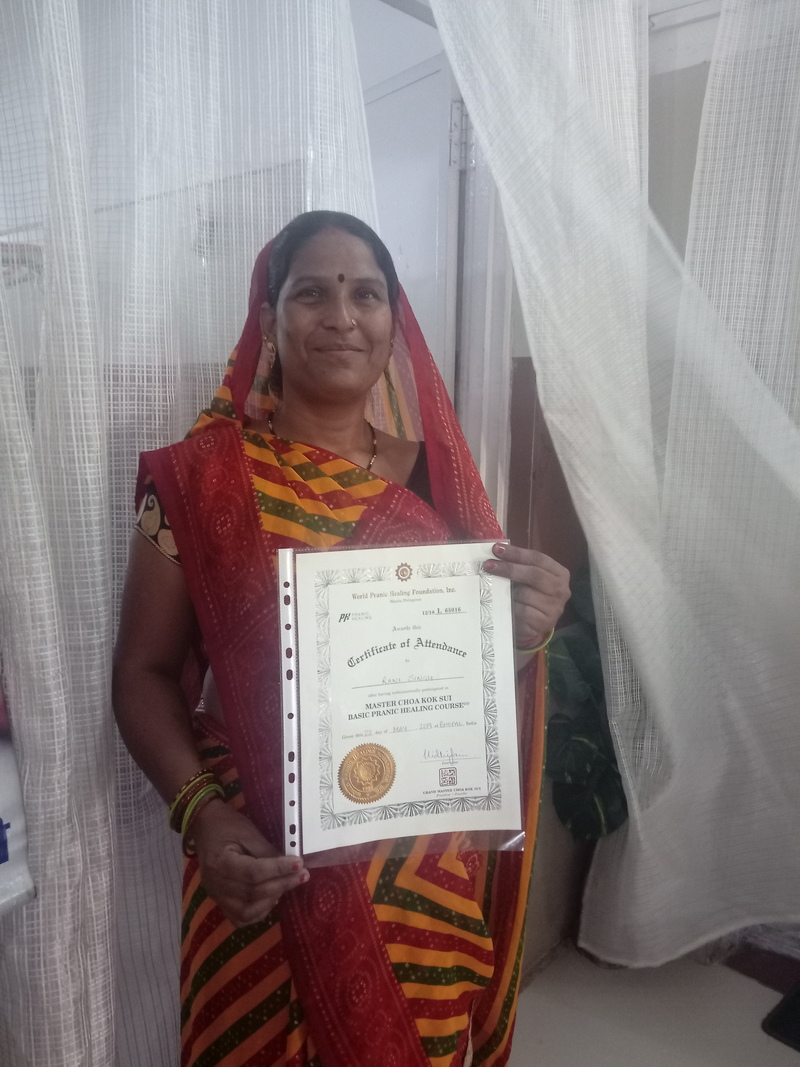 From January to March 2019, we attended 2,113 calls from women and girls seeking assistance from us. We provided counselling and medical support to 2318 and 49 women respectively. 42 First Information Report (FIR) and 9 Domestic Incidence Report (DIR) against patriarchal violence were registered. We provided legal aid to 1018 cases and handled 10 legal cases. 133 women and girl victims were given shelter support. In addition, we have provided training and education to 12 victims as rehabilitation support. Since its inception in 2014, we have supported over 53,000 women and girls on violence related issues.

Rani Singh (Bani) is a 48-year-old woman who has five children. Her husband works with the police. For the last 8 years, Bani’s husband is living with another woman. Bani has since been meeting her daily needs all by herself and with some support provided by her close family members. All her children are married but none of them is supporting her either financially or otherwise. From the past 3 years, her husband and his family members are forcing Bani to leave Bhopal and go back to her family in Mathura. For this reason, she had suffered physical assault and social trauma as well. Bani came to know about Gauravi at an awareness program conducted in her residential area. She came to the centre and registered her complaint. After counselling, her husband began to support financially but discontinued financial support after 6 months. In these 6 months, she was continuously tortured by her in-laws as well as husband’s live-in partner. She was threatened and even physically tortured. Bani has decided to file a case against her husband and in-laws for which Gauravi provided legal assistance. To help recover from the trauma and mental disturbances she has gone through, she has also participated in Chronic Healing Training organised by ActionAid Association for survivor’s psycho-socio healing. 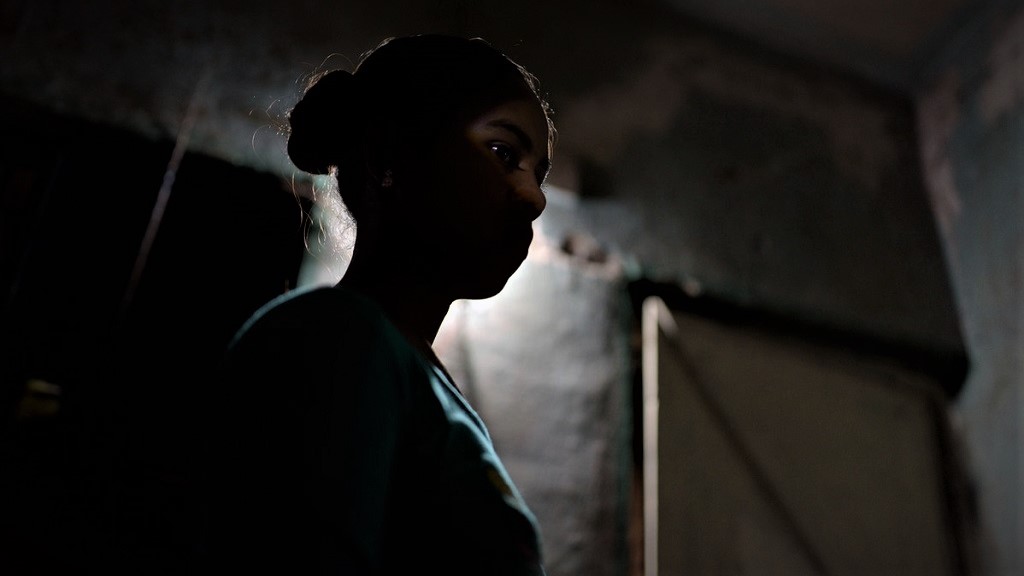 The following are some numbers specific to the program - For the period January to June 2018, we received 6112 calls from women and girls who were seeking for assistance. We have provided counselling and medical support to 3133 and 125 women respectively.

In addition, we have provided training and education to 52 victims as rehabilitation support.

Since its inception in 2014, we have supported over 40,000 women and girls on violence related issues.

Arushi was stalked and harassed by her neighbour, Lehan, who eventually abducted and raped her when she was barely 14 years old. Lehan started messaging Ayushi on Facebook. After she blocked him on Facebook, he later started harassing her on the streets. Ayushi informed her mother who took immediate action and filed a complaint with the police.

Six months after the incident, Lehan abducted Ayushi when she was alone at home. He dropped her back home when Ayushi's parents filed a missing complaint. Ayushi then filed a complaint against Lehan for rape. Lehan's family kept intimidating Ayushi and her parents to withdraw the complaint claiming that Ayushi was having an affair with Lehan and that she gave her consent. Since Ayushi is a minor, her consent was not legal and did not matter in the case. In response, Lehan abducted Ayushi and raped her again.

Ayushi and her mother came to Gauravi for counselling and legal help. We registered an FIR against Lehan under various sections of India Penal Code and POCSO Act, 2012. Supported by a team of lawyers at Gauravi, Ayushi received justice and Lehan was sentenced to twelve years imprisonment starting from 2018. She also received monetary compensation.

135 people are currently supporting this.