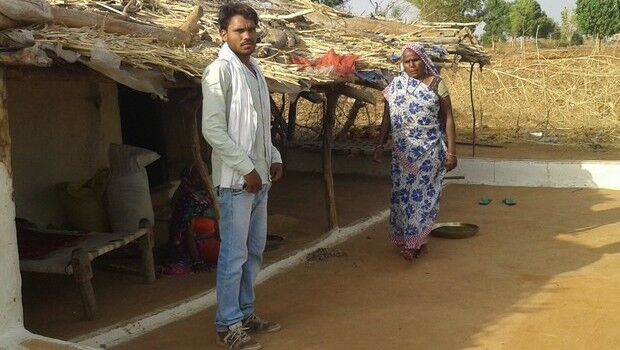 Asharam is a 24-year-old boy from Nandana. Nandana is one of the most remote villages of Madhya Pradesh. The nearest town of Khandwa is 100 km away.

Asharam always had a keen interest in studies. He was unable to get proper education due to lack of facilities. Asharam's parents, brother, and sister work as daily wage laborers. Asharam helped the family by grazing goats.

Asharam completed his primary education in the village school. He secured admission in Jawahar Navoday Vidyalaya residential school because of his excellent performance in studies where he finished his class XII.

Asharam soon settled down in the hostel and liked living there. However, he missed his family a lot. He also felt sad that unlike many other students whose parents occasionally visited them, his family could not visit him due to their constraints.

Visiting him would mean losing a day's wages, and transportation expenses are additional. He didn't complain because he was grateful to at least get an education.

After completion of 12th standard, higher education was a major concern for Asharam.

Nothing in this village had changed in the last 24 years. As his family's financial condition was bad, Asharam started working as a laborer to save for further studies.

That is when he came to know about Sant Singaji Institute of Science & Management. He got admission in B.Sc Microbiology in SSISM. This was not an end to his problems.

Nandana Village is 80 km from Sandalpur where his college is. He couldn't afford the everyday commute to come to college. So, he started living at his sister's place in Rajor. Rajor is 15 km from Sandalpur, and there are no local buses that cover more than 5 km.

The free college bus helps Asharam to commute to college, and he doesn't have to worry about his education. On days when he has to stay additional hours in college, he walks the 10 km back.

With the help of the college faculty and facilities, Asharam completed his graduation with good grades. He is today pursuing MA Development from Azim Premji University.

Asharam's past is now a fading dream. He now looks forward to his future. There can be many such transformations, all we need is a helping hand with belief in change.

You can also help poor children living in remote areas get access to transport facilities. You can donate so that more students in remote villages can get an education. You can give with confidence because every program listed is GIVEASSURED.

Donations to this program will contribute to a fund that will cover the transport for the students from their remote villages to the college.

Sant Singaji Institute of Science & Management is in Sandalpur - about 4-5 hours away from Bhopal and Indore. The college offers many undergraduate and postgraduate courses. They have their own software development wing as well.

The students belong to underprivileged backgrounds and live in remote villages. These villages are sometimes very far from the institute and beyond forest areas. They walk through forests just to reach the bus stop and then have to travel over 50 km by bus to reach college.

The commute to and fro to college is significant. If they cannot manage to find a way to get to college, the students have no choice but to discontinue their education.

The college provides free transport to the students. The college bus gives them access to college and is one of the critical aspects to help them continue their education.

When you donate to this program, you help in giving rural children a chance at education.

Your donation will support 1 Unit