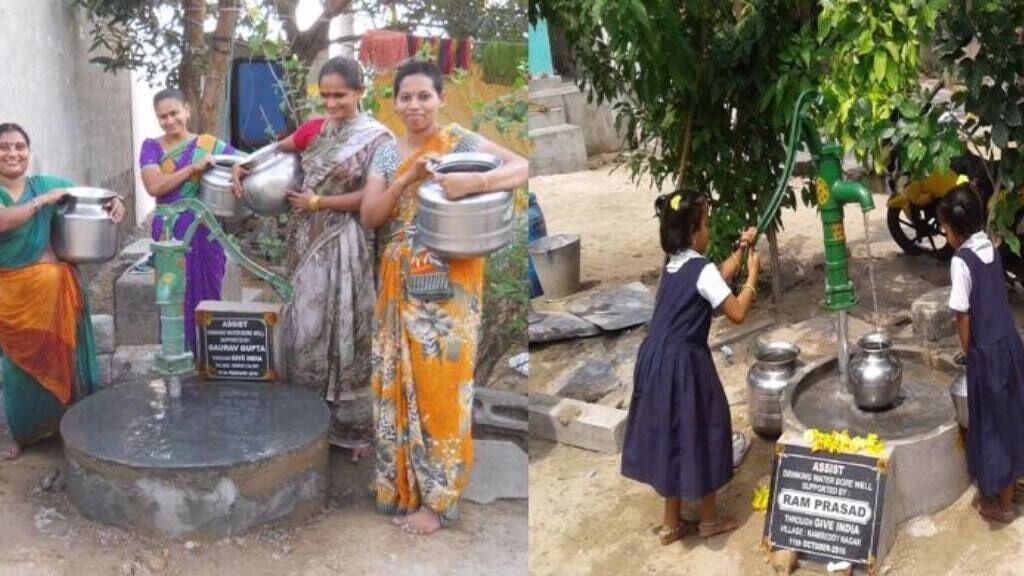 Every monthly donation helps more communities get access to water

The Scheduled Tribe (ST) weaver community lives at the end of the village and had no access to water. The village has two borewells installed by the authorities but these families have to walk long distances to get water from those wells. The community faced a lot of hardships because of this.

All the families of the community depend on the master weaver for the raw material for weaving. ASSIST decided to help by digging a borewell near the master weaver's house. This new borewell is utilized by 25 families for drinking and domestic use.

The community is extremely happy as this reduces the physical labor of carrying water from long distances as well as let them use the time effectively in their livelihood activities.

Drinking water is a basic need and yet, many poor families do not have access to this basic need. ASSIST, through this program works in providing accessible potable water to poor and marginalized communities in the rural areas of Prakasam, Guntur, Krishna, and Ranga Reddy districts in Andhra Pradesh.

A comprehensive baseline survey of villages is conducted to assess the needs of the people. The program plans to provide bore-wells in places where the families have to walk long distances to fetch water. In addition to providing the bore-well, ASSIST's field staff also train the villagers to maintain and monitor the functioning of the bore-well. The complete cost of the borewell is borne through donations.

The donation amount caters to the hand pump, cylinders and other consumables required for construction. When choosing to donate to this program, you will provide access to potable water to 25 families through one bore-well.

The mission of ASSIST is to create an ideal and equitable society by promoting rural development. The organization was born in response to the social problems prevailing in the Prakasam and Guntur districts in AP. They work for the development of the poor and marginalized communities in the rural areas of Andhra Pradesh.

A unique feature of ASSIST is that they do not work for the people, but with the people in order to achieve the overall objective of making a community a viable unit for its own development.They come up with innovative and adaptable strategies to keep constant communication at the community level. They have taken the responsibility of the overall development of these rural areas as it undertakes programs to create awareness, economic and child development, women empowerment, community health, housing and sanitation, water provision etc.

With this support, the number of children going to school has increased and the water facilities in the villages that Assist works with have been renovated. Every year close to 514 illiterate women get educated, 529 get trained in vocational skills, 22 government schools are strengthened. ASSIST aspires to cater to the rural people in every possible way and make their lives better. 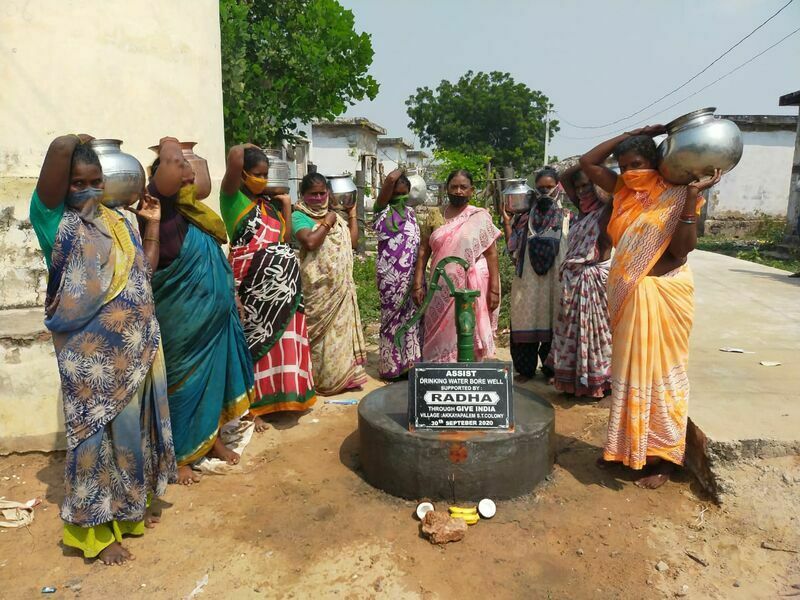 This programme have a longer impact on the beneficiaries as they are supported in getting easy access to water for regular domestic usage. The beneficiaries no longer need to work hard with their aching backs to fetch the basic human need “water”. The communities have suffered a lot before the implementation of this programme in their areas. A weaver cannot work on his livelihood without worrying about the water and a working family cannot rest happily on a day off with the family members without worrying about fetching water for the daily usage. After the borewells were installed in their community, a weaver need not spend most of this time in bringing water and a daily labourer need not worry about water after a long day at work. In the current pandemic, this programme have served more than its purpose. Availability of water borewell nearby the beneficiaries house had ensured that there are no people gathered at one place for water, which helped in maintaining social distance and reducing the virus in the rural areas. If it isn’t for this programme the situation would be worse during the lockdown for people to fetch water and get infected in the process.

Water bringing in happiness in the community

Water bringing in happiness in the community 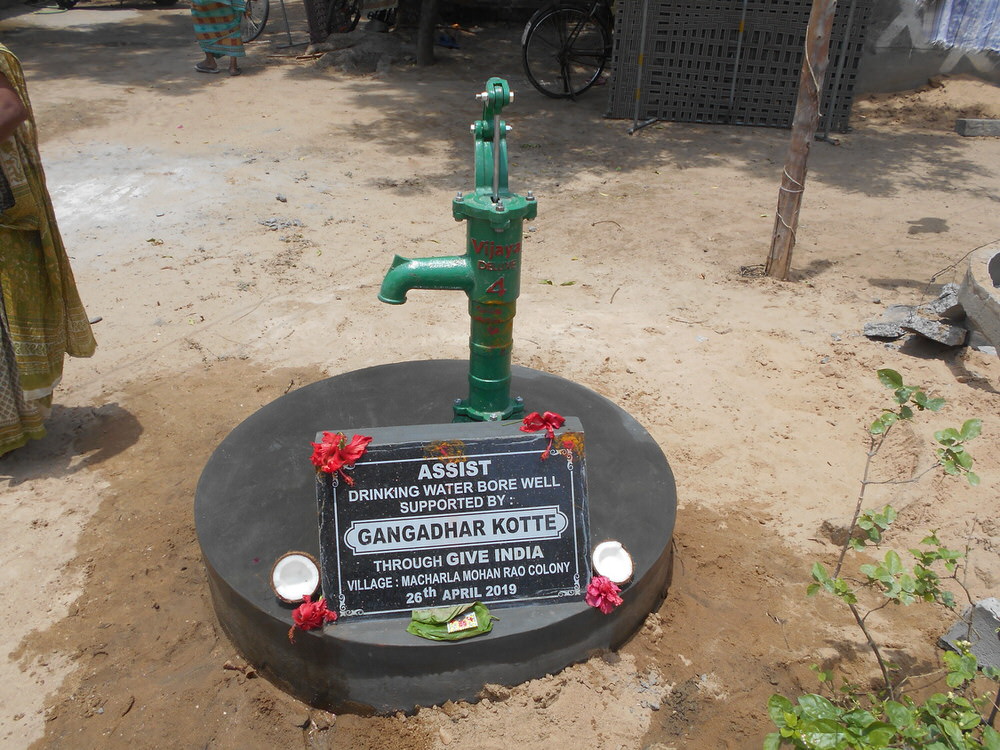 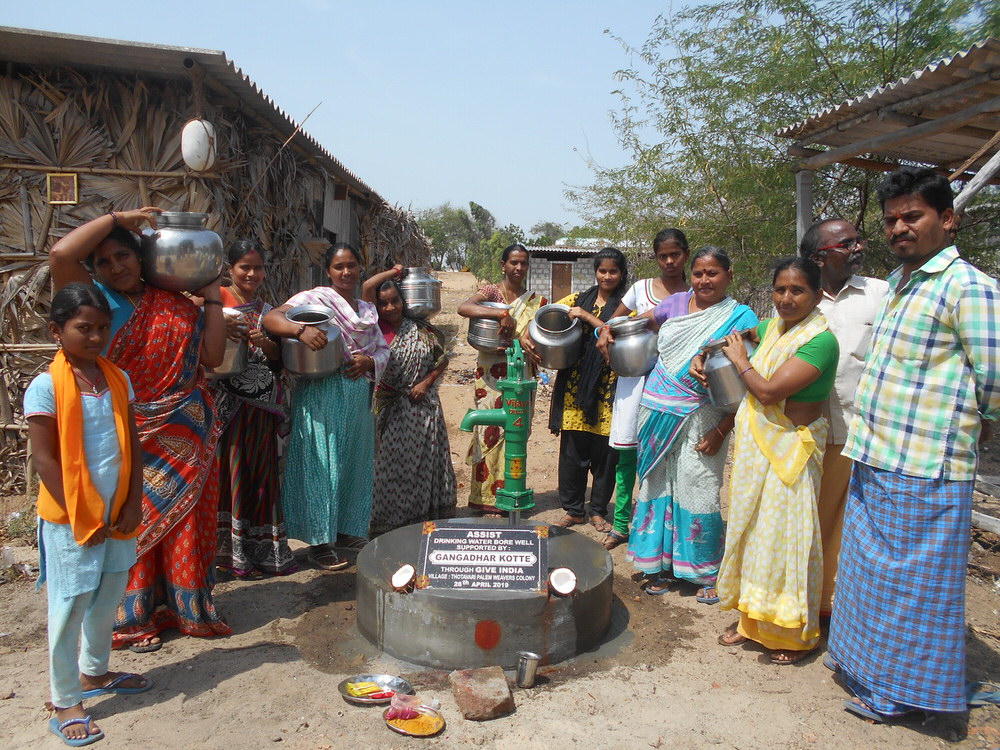 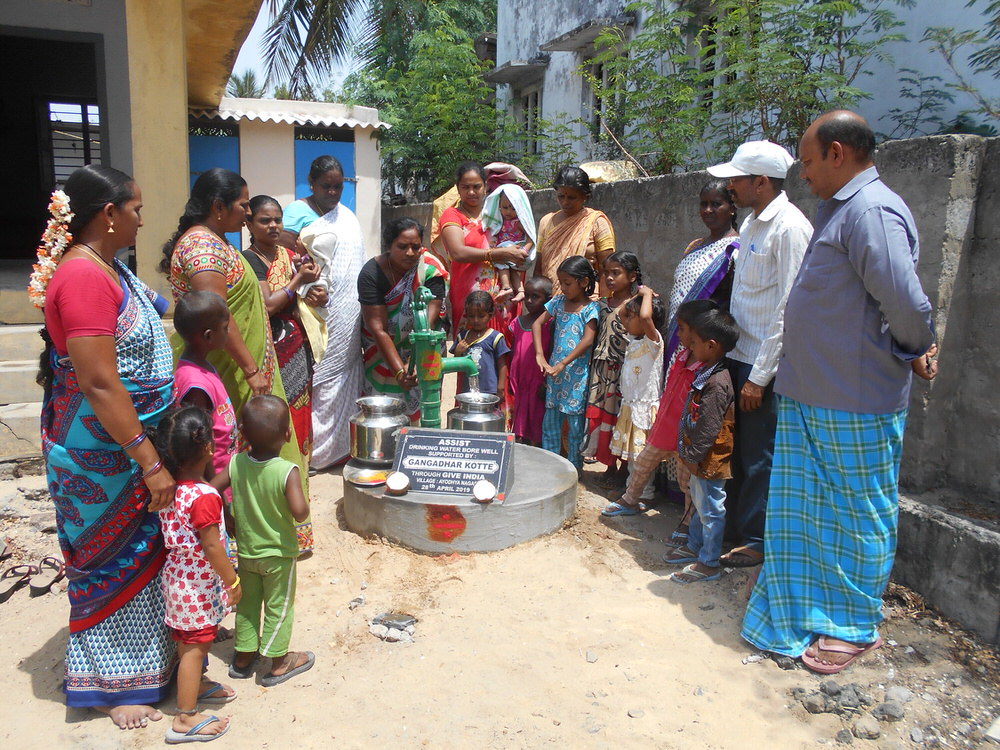 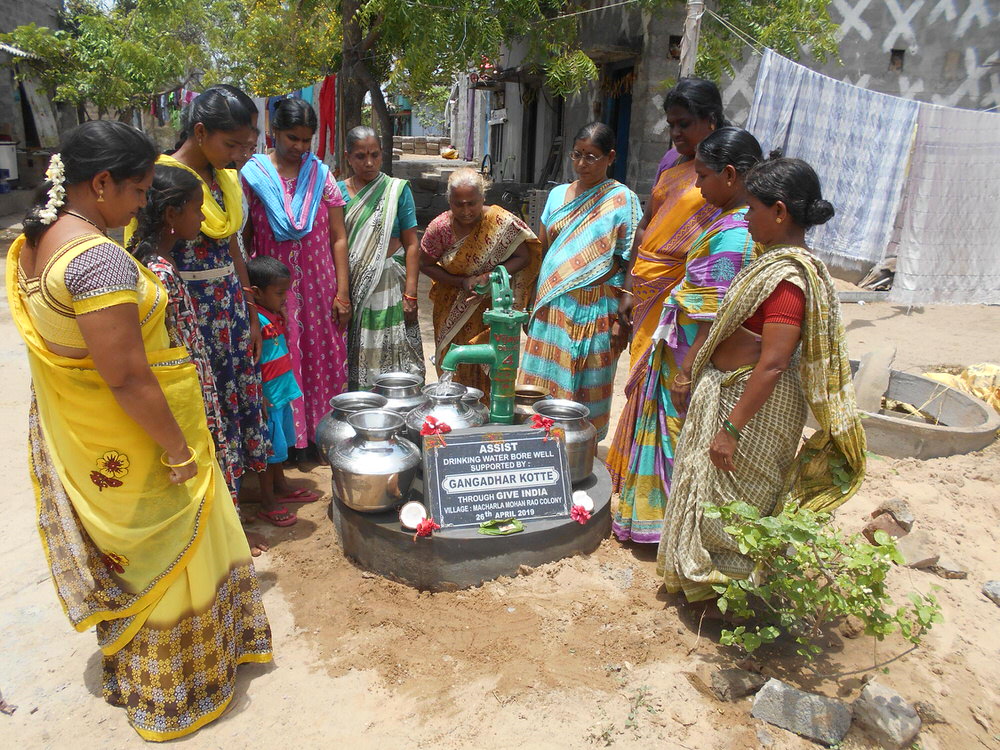 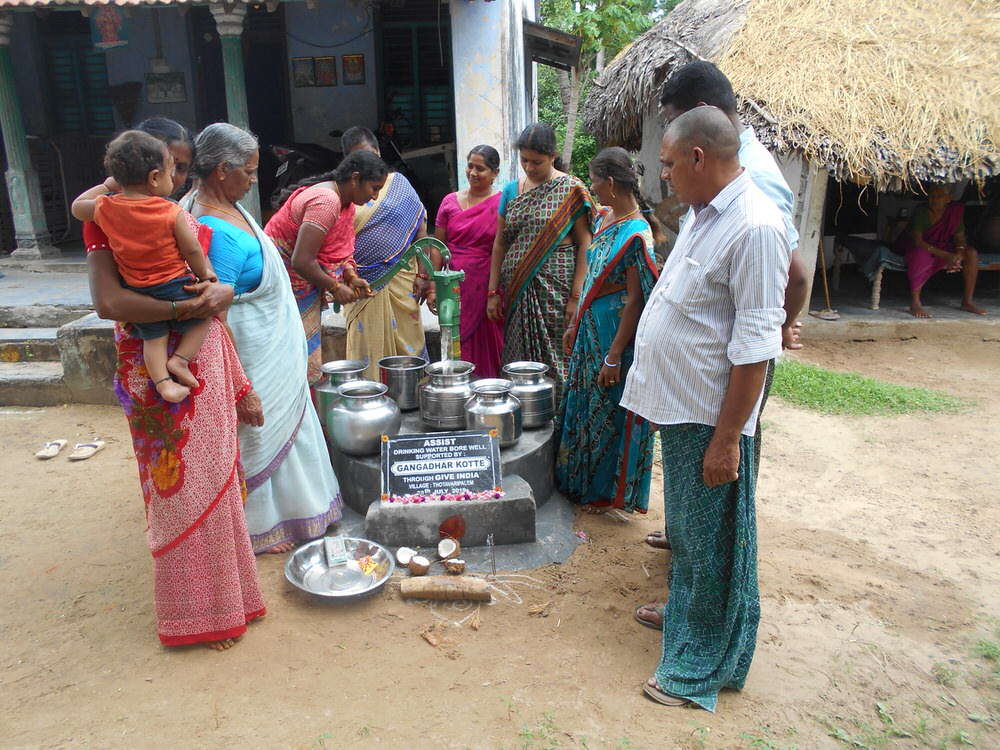 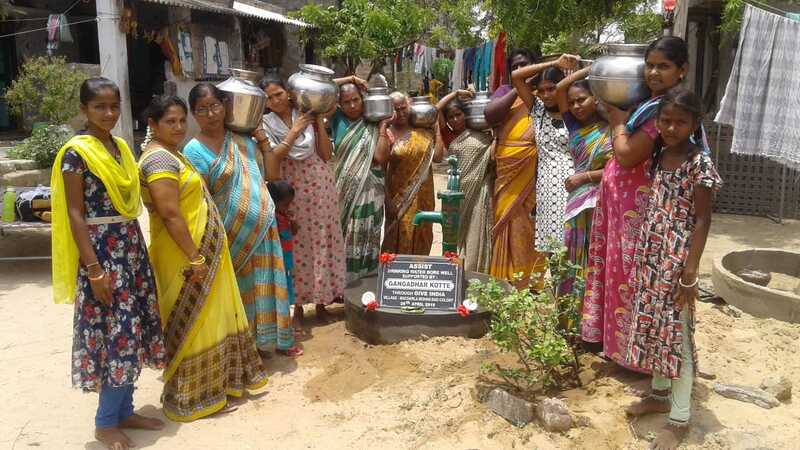 105 leprosy families are living in a colony near Changheez khan pet village of Edlapadu mandal in Guntur District. As, they are all victims of leprosy they cannot work and earn money for their livelihood. Government is supporting them with 35kgs of rice to each family. In addition to rice Government is also giving Rs.500/- towards monthly pension to those who badly affected. Small percentage of persons goes to agriculture works.

46 families are separated from 105 families due to some problems emerged among themselves. They came out of the colony and put up small tents adjacent to hillock and living separately. They are facing severe problem for shelter and water. In order to get the housing plots from the Government, some of them approached the District Collector and briefed the problem that they are facing. Later the District Collector has sanctioned individual pattas of 1.5 cents land for construction of house and 0.50 cents land for agriculture purpose. Accordingly, they constructed small houses with asbestos sheets in the given land. But, the water problem is still remained unsolved. They have to walk one kilometre to fetch water.

At this juncture, colony members have requested ASSIST to drill a bore well in the new colony. After their request bore well was laid in a common place. After drilling a bore well in their colony, villagers felt very happy that they need no. Now they are using the bore water not only for drinking purpose, but also for domestic use. They are extremely happy that water is available in their locality. They express their gratitude to ASSIST for providing bore well in their vicinity because of which they can easily access the bore well for their domestic and drinking purposes. This support has helped them in leading a normal life with basic human needs. 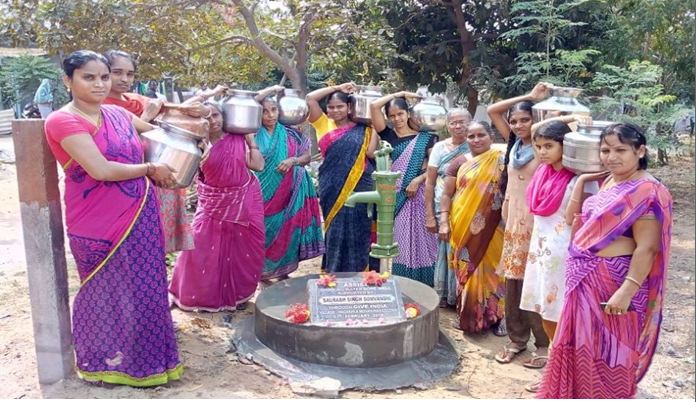 The main aim of this programme is to ensure that communities are able to access safe drinking water. This focuses primarily on renovating old bore wells or installing brand new bore wells for vulnerable families that are suffering. ASSIST has done business for many years now with the contractors in different areas that carry out the implementation work. The main process is that once the funds arrive, ASSIST calls for tenders and quotations and then the best one is selected by the purchase committee. After this, work begins immediately and a new bore well is installed or an old one is properly renovated.

The village Macharla Mohan Rao Colony is located at Akkaya Palem Panchayath of Vetapalem Mandal in Prakasam district. The village consists of 99 families. The total population of the area is 324. The main occupation of the people in this village is of weaving and masonry labour. Some people in the village work as salesman in textile shop. In this society there is an Anganvadi centre where children were provided with a drinking facility, however this was also suffering because of a lack of water. In this village near the bazaar there is one main road and three crossroads. They were spending a lot of time during the day only collecting water. There is no water supply on the third cross road so the residents from there are collecting water from the first crossroad. The Sangam saw the problem and requested ASSIST for a bore well. ASSIST staff went to the area and identified the problem. After this a bore well was drilled on the third crossroad near the house of Mallela Ludhiamma, W/O Abraham. Now 25 families are using the water from the new bore well. The problem is solved and the families are extremely happy and are thankful to ASSIST and GIVE India for their support. The children are happy because now they are using their free time for studies. The parents are also satisfied because they can go about with their livelihood activities and earn a living for themselves and their families.