by The Leprosy Mission Trust India 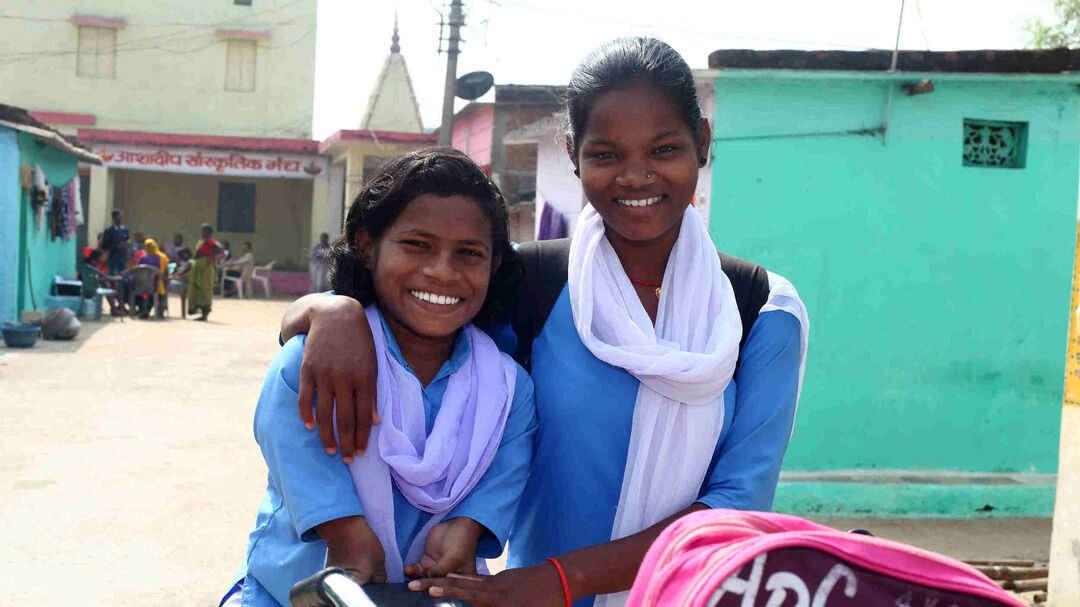 Mamta and Kajal’s friendship is an inspiration for many!

16-year-old Mamta lives in the Ashadeep leprosy colony. Her father who was affected by leprosy is now cured but her life has been far from easy.

Both her parents are addicted to alcohol and their regular fights make it hard for Mamta and her siblings to stay at home. Outside the walls of her home, her she has often been mocked for belonging to a leprosy colony.

Hope found Mamta in an unlikely companion, Kajal. Kajal is a 16-year-old girl with dwarfism who regularly visits the Ashadeep colony. She and Mamta became good friends over 10 years ago and travel together to school on Mamta’s bicycle.

Both Kajal and Mamta are often the targets of cruel jokes by their peers. Kajal is laughed at for her disability and Mamta gets called names for being from a leprosy colony. They survive each day by standing up for themselves and for each other constantly.

Their hardships have brought these two strong girls together. They look forward to going to school and creating a better future for themselves. While Kajal wants to be a teacher, Mamta aspires to be doctor. They dream big and work hard believing that there’s more to life than their poverty and alienation.

The 'Catch Them Young' program initiated by the Leprosy Mission aims to empower children affected by leprosy or those who belong to families where a member is a leprosy patient.

The program realizes that such children may not be able to avail all facilities and opportunities that are otherwise easily available to students free of any social stigma. Scholarships are awarded to these children in order for them to continue their education. The scholarship is awarded to them once a year and includes school fees, books, and stationery. The program was launched in the year 1998 and primarily aims to support students who are pursuing higher education in schools, colleges, and professional courses.

Donate to this program and help children from stigmatized families lead a normal childhood.

The Leprosy Mission was born in 1874 when friends of an Irish school teacher, Wellesley Bailey, and his wife Alice, promised to raise 30 pounds a year to help persons affected by leprosy in India.

Since then, the legacy of their commitment and selfless work has inspired Leprosy Mission Trust India (TLM) to serve lakhs of people who are suffering from leprosy and its social, economic and psychological impact. TLM works through 14 Hospitals, 6 Vocational Training Centers, 5 Snehalayas (Homes for the care of the elderly leprosy-affected people), and various Community-Based Development Projects. Their constant endeavor has been to provide healing, inclusion, dignity and an opportunity for sustainable livelihoods to individuals affected by leprosy.

Children parliament at a glance

Children parliament at a glance 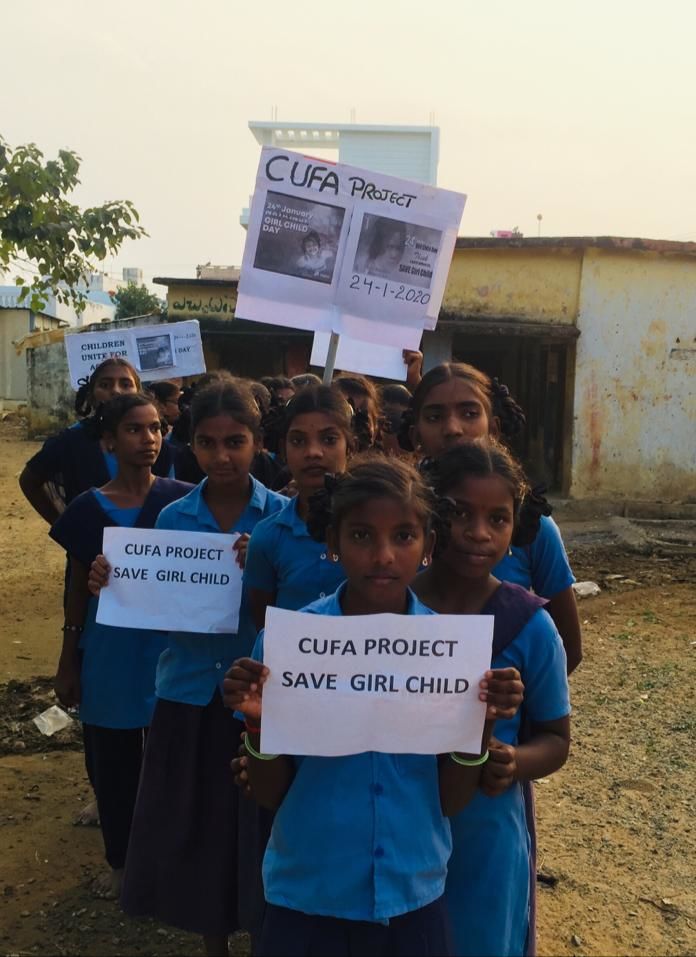 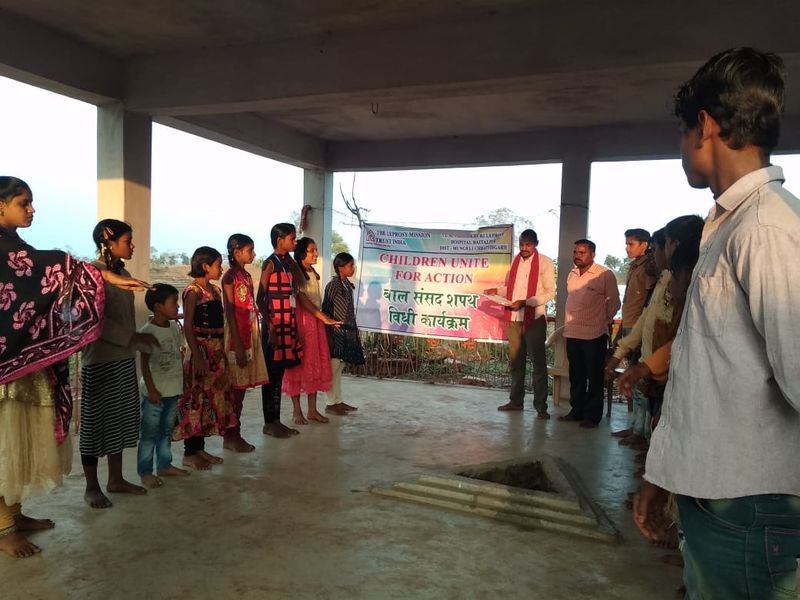 Under this unique programme - children are provided support for continuing (or getting back) to the mainstream education system of the country, psychological support to battle the stigma and awareness and empowerment training to stand up for their legal and fundamental rights. In the last 2 quarters, two new children parliaments were formed and now project is having 16 children parliaments across all the locations. Children Parliament actively participated in organizing several programs such as save girl child, International Women’s day, engaging with stake holders for advocacy. Children Parliaments are engaging with stakeholders at village level. Children Parliament advocated with ward counsellor for safe drinking water and drainage in March 2020. A letter was submitted to ward counsellor and with follow up the problem was sorted out. Children Parliament organized “save girl child’ program in schools to highlight the issue of ‘right to survival’ of girl child in January 2020. Newly formed Children Parliament’s Oath taking ceremony was organized in the villages in Chandkhuri. They took oath as member of children parliament in Feb 2020. Gram Pradhan was also present in the ceremony and promised to encourage children parliament in the village. With emergence of Covid-19, project initiated awareness activities ensuring ‘child participation’ in it. Children were encouraged to participate in developing several awareness posters, songs, painting, related to Covid-19 and put it on their walls so that other too get information related to it. These posters were about hand washing, maintaining safe distance, using hand sanitizer and not going out without any important reason. Trained children actively trained others on how to prepare and use ‘Mask’ and ‘Physical Distancing’. Project used to train them through video calls and clips. Project ensured the physical distancing while conducting these activities in the villages. An activity called “Our time will also come and Corona will go” was conducted with children. Basically the idea behind conducting this activity was to boost the morale of children so that positivity among children continues to exist. Information through wall paintings was also done. World Environments Day in June 2020 was conducted in which tree plantations were done by children. While conducting this activity, precaution like physical distancing and was followed. Continuous home visits and regular follow up through phone calls (during Covid-19 pandemic and nationwide lock down) ensured that 210 (out of 212) children supported financially as part of ‘right to development’ in 2019-20 for educational purpose have passed their examination. 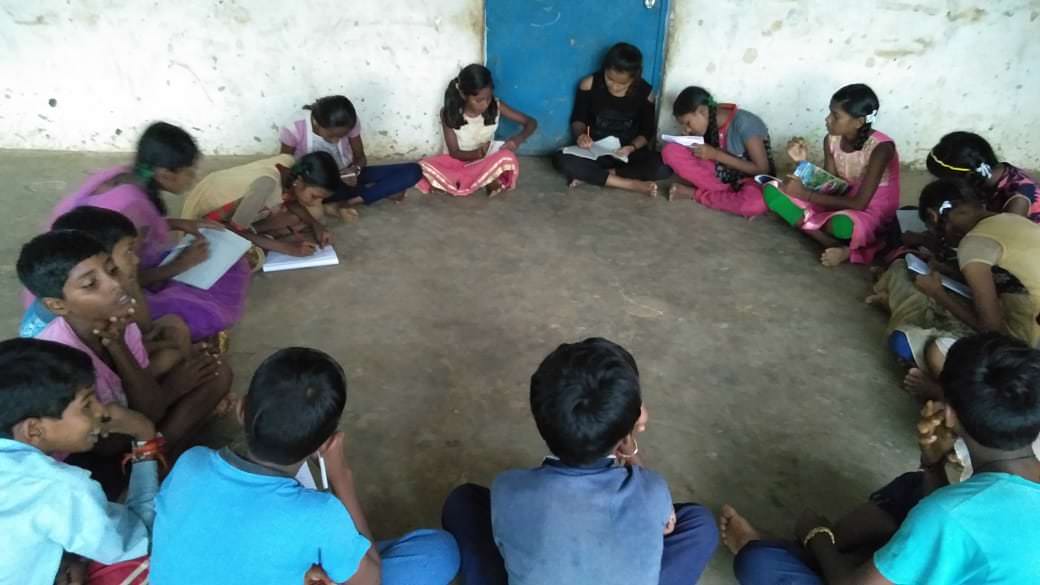 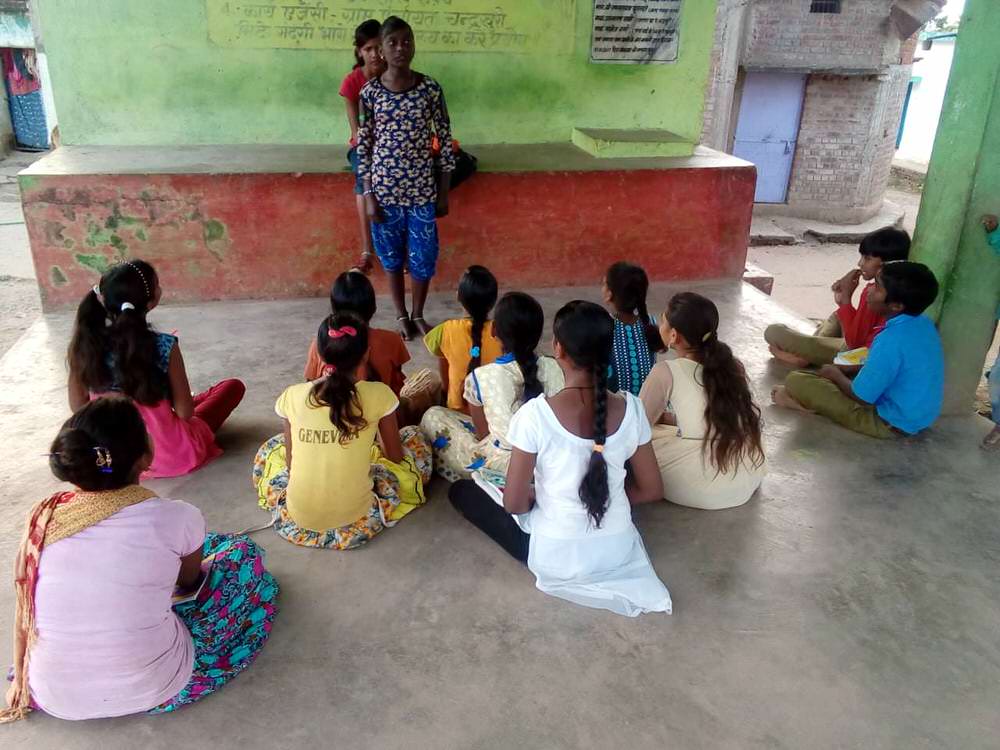 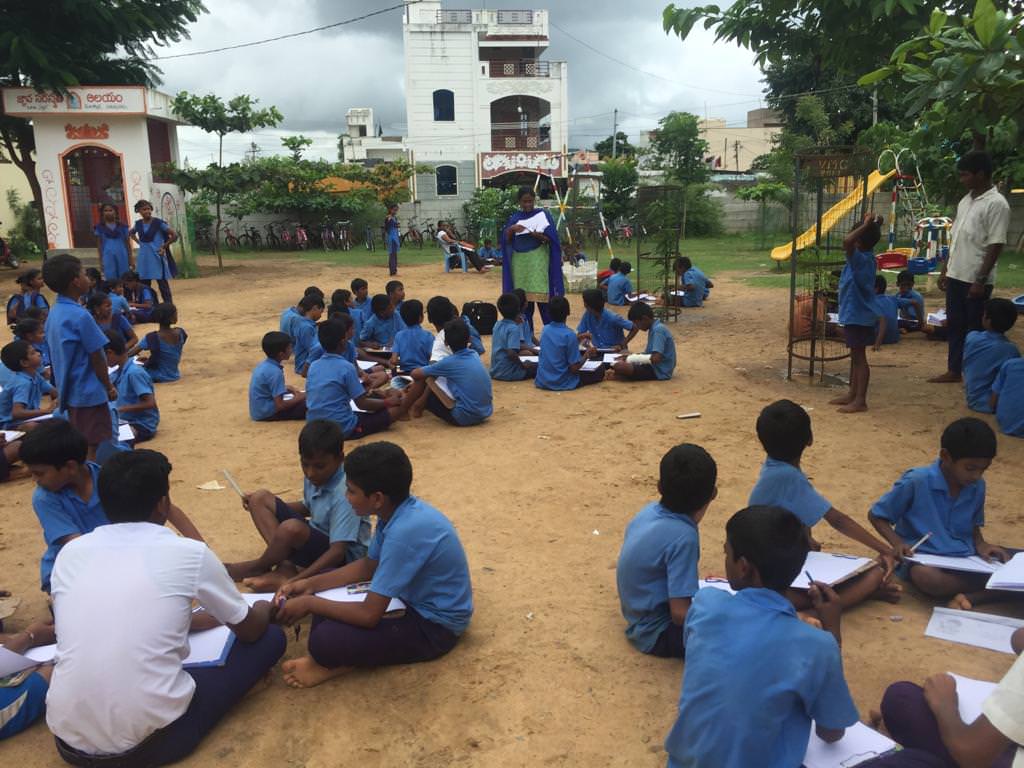 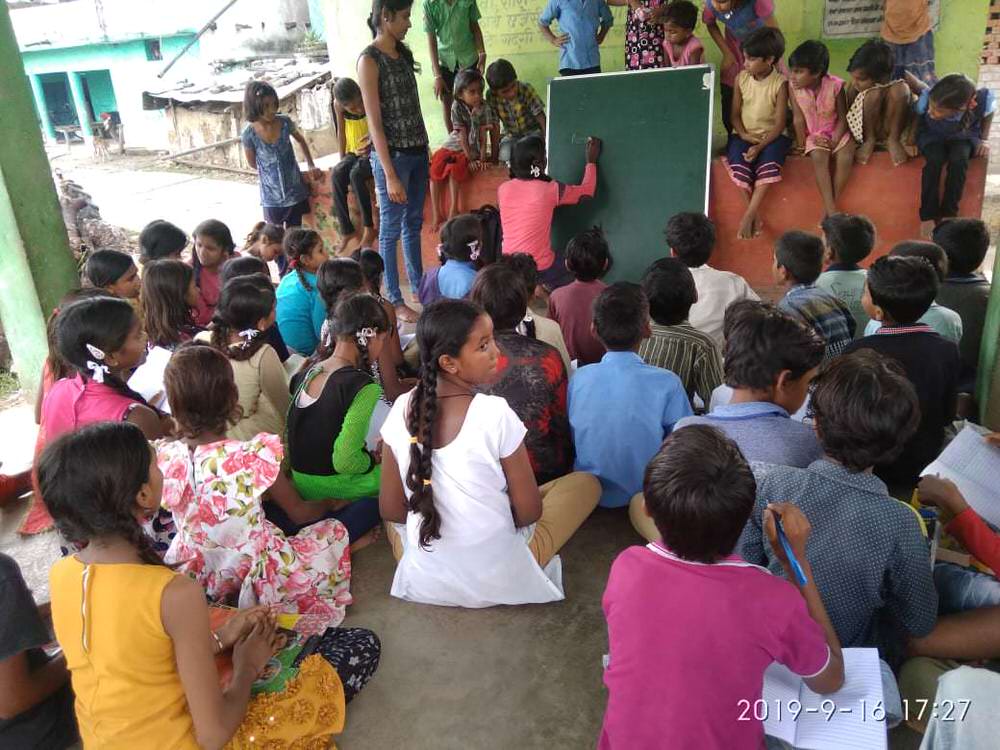 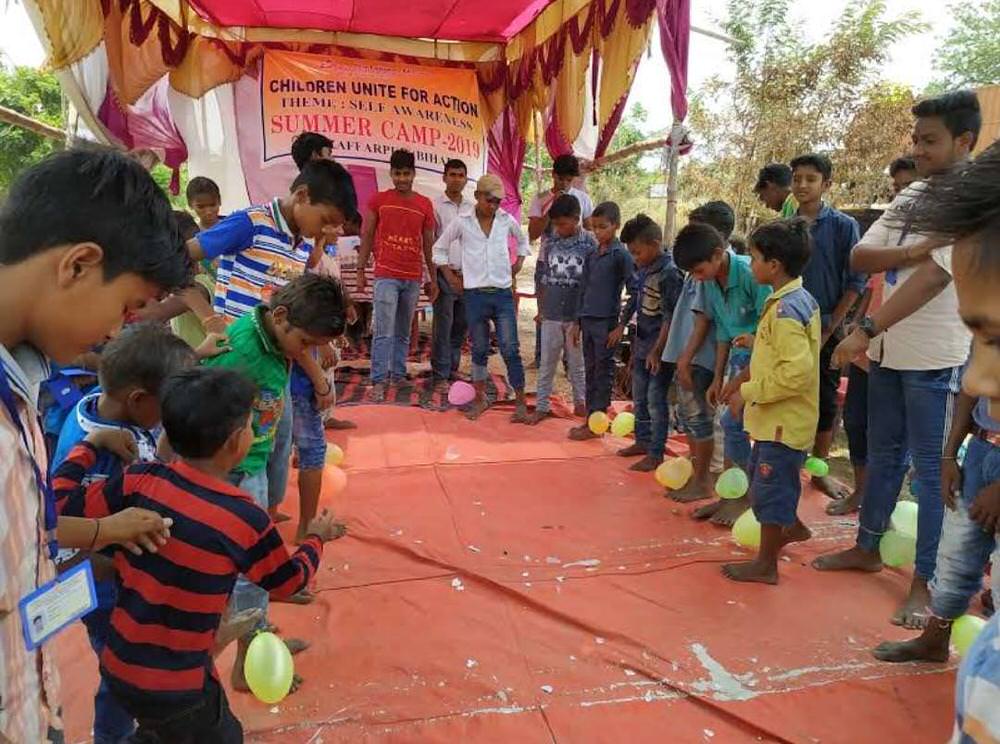 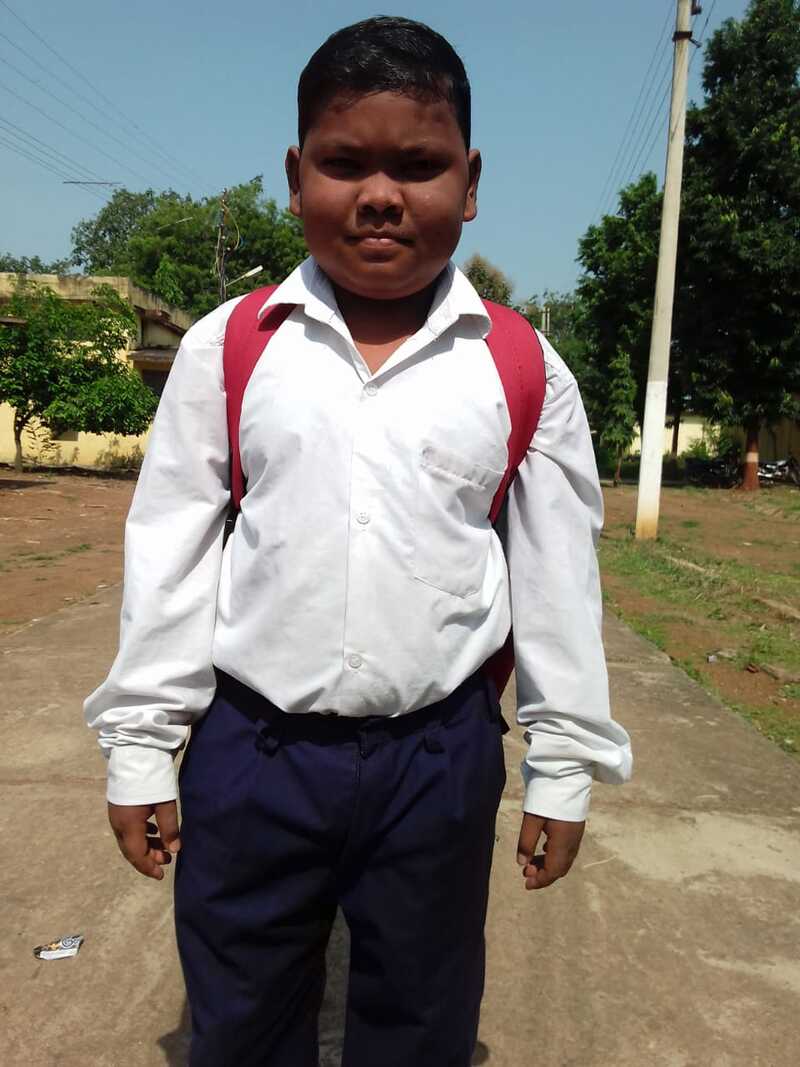 The project has been working in 15 villages across three states - West Bengal, Chhattisgarh and Bihar. Under this, scholarships have been provided to 150 children and 1325 more children have been brought under the program's impact.

A total of 8 well-functioning Children's Parliaments have been established across the 3 centres. All of these children are being provided regular training and mentoring on rights' awareness based on UN Convention on the Rights of the Child.

Regular summer camps have been organised. A sports centre for girls in the leprosy colony has been created.

Program children are regularly taking up issues that impact them in community and their schools through these functioning Parliaments.

For the last one year, a 12-year old boy has been forced to call a hospital his home. Sunil Nishad has been battling some of the most grievous reactions caused by leprosy at The Leprosy Mission Trust India’s hospital at Chandkhuri in Chhattisgarh.

Belonging to the Baloda Bazaar district of Chhattisgarh, Sunil and his mother would travel frequently for more than 64 kms to Chandkhuri in order to get treatment for Sunil's leprosy complications. The severe reactions forced Sunil to stay at the hospital for months on end, thus forcing him to drop out of school.

Being a bright student, Sunil was miserable with the break in his education and thought he would never see the inside of a school again. Sunil’s case was referred to CUFA by the hospital staff for counselling and support.

The project staff took initiative and enrolled Sunil in a nearby school after taking leaving certificate from his old school in Baloda Bazaar. Sunil was also provided a scholarship under the Awards Programme of CUFA.

Sunil is now studying in VI standard and leaves the hospital with a cheerful smile to go to his school. The project staff also provides additional academic help to Sunil, whenever needed.

Children Unite for Action' is a project working for children and youth affected by leprosy and other disabilities, to access their right to survival, right to protection, right to participation and right to development. The project ensures that children have the necessary skills and knowledge to access education and attain desired relevant careers. The needs of these children are addressed in a holistic manner where they are developed as 'Champions for Leprosy'. Early detection of leprosy among children to prevent disabilities and inclusive development are important aspects of the project. Children affected by leprosy from lower socioeconomic background are awarded scholarship for two years as part of 'A Proud Champion' Award Programme of the project, to encourage and support them to overcome stigma and discrimination related to Leprosy in order to dream high and achieve higher. Many children are getting benefited under this program.

Kalpana Patel wants to be a nurse and serve the society. Her parents are visually impaired and live in a village in Allahabad District. Her father, Mr. Shiv Asre was affected by leprosy. They struggled to meet their ends meet. TLM supported them through livelihood training and helped them set up a kirana store for their livelihood. She has a younger sister studying in Class 12. Both sisters help parents with the shop during their free hours. Even In the midst of all problems Kalpana took up science stream and pursued her goal. She scored 75% in Class 12 examination and has applied for General Nursing. Though her extended family wants her to get married and settle. Her parents are motivated and want her to continue her education. The support received is being utilised for her educational needs.

117 people are currently supporting this.