VISHWAS was started in 2005 by Ms.Neelam Jolly. Extensive work was carried out in Sohna block of Gurugram and the knowledge gained was converted to concepts of Inclusive practices. Our growth began in earnest as we moved into our first modest premises in Sushant Lok, Gurugram, in 2007. This gathered momentum when, in March 2009, we were allotted a vandalised and abandoned school building in Sector 46, Gurugram. The idea of working with children with disabilities came with its own challenges. Neelam Jolly spearheads VISHWAS and under her leadership VISHWAS is running four programmes – 1.VISHWAS Vidyalaya 2. Community based Programme 3. Skill development andTraining Programme 4. Research and Training Programme. VISHWAS Vidyalaya is a Haryana Education board recognized Elementary school with inclusive practices. The Vidyalaya serves close to 300 students including 17% children with disabilities. 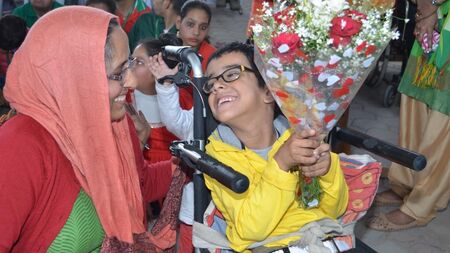 Support the education of underprivileged children in an inclusive school